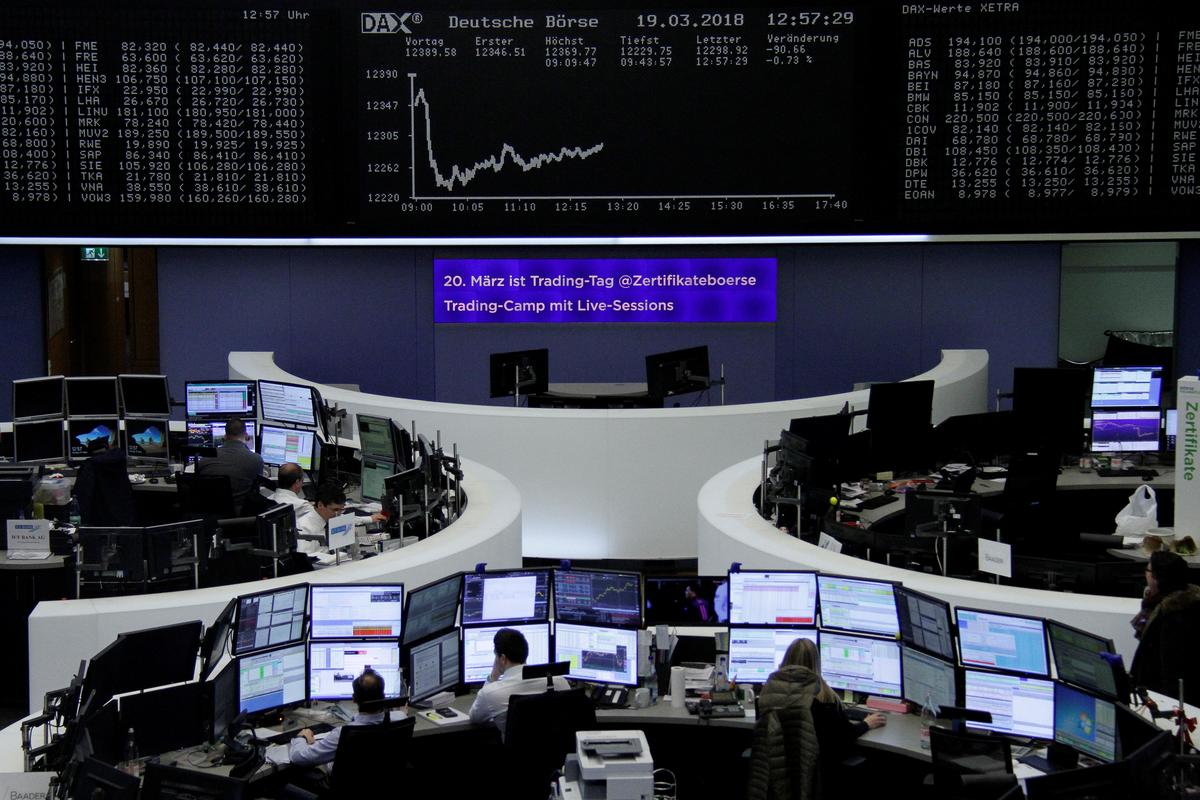 LONDON (Reuters) – Share markets were stuck on their worst run since November on Monday, as caution gripped traders in a week in which the Federal Reserve is likely to raise U.S. interest rates and perhaps signal as many as three more lie in store this year.

The German share price index, DAX board, is seen at the stock exchange in Frankfurt, Germany, March 19, 2018. REUTERS/Staff/Remote

The caution also came against the backdrop of global trade war worries which are set to dominated a two-day G20 meeting starting later in Argentina and there were plenty of idiosyncratic factors in play too.

London’s FTSE .FTSE was down almost double the rest Europe as a savage profit warning wiped more than half the value off one of its big tech firms and weak international commodity markets hit oil and gas firms and miners. [.L]

The pound, though, was having its best day in almost two months against the euro EURGBP= as Britain’s Brexit negotiators appeared to be nearing a ‘transition’ deal with soon-to-be-former EU colleagues in Brussels.

The euro also fell against the dollar as bond markets sent the gap between 10-year German and U.S. government yields, referred to as the ‘transatlantic spread’, out to its widest since December 2016. DE10YT=RR US10YT=RR.

Many analysts had been expecting that spread to be narrowing as the ECB nears the end of its stimulus program, but it hasn’t proved the case. The shorter-dated 2-year borrowing cost gap is near its widest level in over 20 years. DE2YT=RR US2YT=RR

“There has been the narrative of supposed policy convergence between the ECB and the Fed, but that is just not the reality,” said Saxo Bank’s head of FX strategy John Hardy.

With as many as four hikes seen this year, expectations were “chomping at the max” he added. “I think the euro ‘longs’ have good reason to be nervous,” he said referring to those betting on a higher euro.

Weakness in equity markets was almost worldwide. Japan’s Nikkei .N225 had ended down almost 1 percent as its exporters were hit by more strength in the yen which was up for a third session in the last four. JPY=

The rest of Asia had struggled too .MIAPJ0000PUS, though China .CSI300 did manage to eke out some gains as Beijing announced a new economic team.

It included a surprise new central bank chief but for the most part was largely as anticipated and is expected to keep the focus on halting riskier types of lending in the giant economy.

Shares in social media site Facebook (FB.O) were down 3.7 percent in premarket trading after reports that data of 50 million of its users were misused by a political consultancy firm ahead of the 2016 U.S. elections and Brexit vote.

FILE PHOTO: The seal for the Board of Governors of the Federal Reserve System is on display in Washington, DC, U.S., June 14, 2017. REUTERS/Joshua Roberts/File Photo

For the year so far, the BAML figures last week showed $9.8 billion has gone into tech stocks, while $41 billion has flowed into emerging markets and $31 billion into Japan.

Whether the cash continues to flow could depend on what the Fed decides on Wednesday. All 104 analysts polled by Reuters expected the Fed would raise rates to between 1.5 percent and 1.75 percent on Wednesday.

They were less certain on whether the “dot plot” forecasts of committee members will stay at three hikes this year or shift higher.

It will also be the first press conference for new Fed Chair Jerome Powell. “Expected is a confident Fed Chair, both with respect to the economy’s strength and the Fed’s approach to policy,” said analysts at Westpac in a note. “Gradual and timely are the operative words for policy.”

Analysts at JPMorgan, however, see a risk the Fed might not only add one more rate rise for this year but for 2019 as well.

“The worst case is the ‘18 and ‘19 dots both move up – the Fed is currently guiding to five hikes in ‘18 and ‘19 combined but under this scenario that would shift to seven hikes,” they warned in a note to clients.

“Stocks would probably tolerate one net dot increase over ‘18 and ‘19 but a bump in both years could create problems.”

Any nod to four hikes would normally be considered as bullish for the U.S. dollar, yet the currency has shown scant overall correlation to interest rates in recent months.

Reasons cited by dealers include concerns about the U.S. budget and current account deficits, political chaos at the White House, better growth in competing countries, particularly Europe, and the risk of a U.S.-led trade war.

Trade will be top of the agenda at a two-day G20 meeting starting later on Monday in Buenos Aires and any signs of escalating stress between the U.S. and China could make investors in Asia nervous.

As U.S. trading began, the dollar had recovered to 106.23 yen JPY= having been as low as 105.69 overnight though it had begun to wilt against the euro which left it around 0.3 percent weaker against a basket of currencies at just below 90. .DXY

The prospect of higher U.S. interest rates was been a burden for non-yielding gold, which slipped 0.8 percent last week. On the day, the metal XAU= was down at $1,311.20 per ounce.

Oil prices eased after ending last week with a solid bounce. Brent futures LCOc1 dropped as much as 40 cents to $65.81 a barrel, while U.S. crude CLc1 futures for April, which expire on Tuesday, dipped as far as 36 cents to $61.98 a barrel.

Additional reporting by Wayne Cole in Sydney and Abhinav Ramnarayan in London; Editing by Toby Chopra