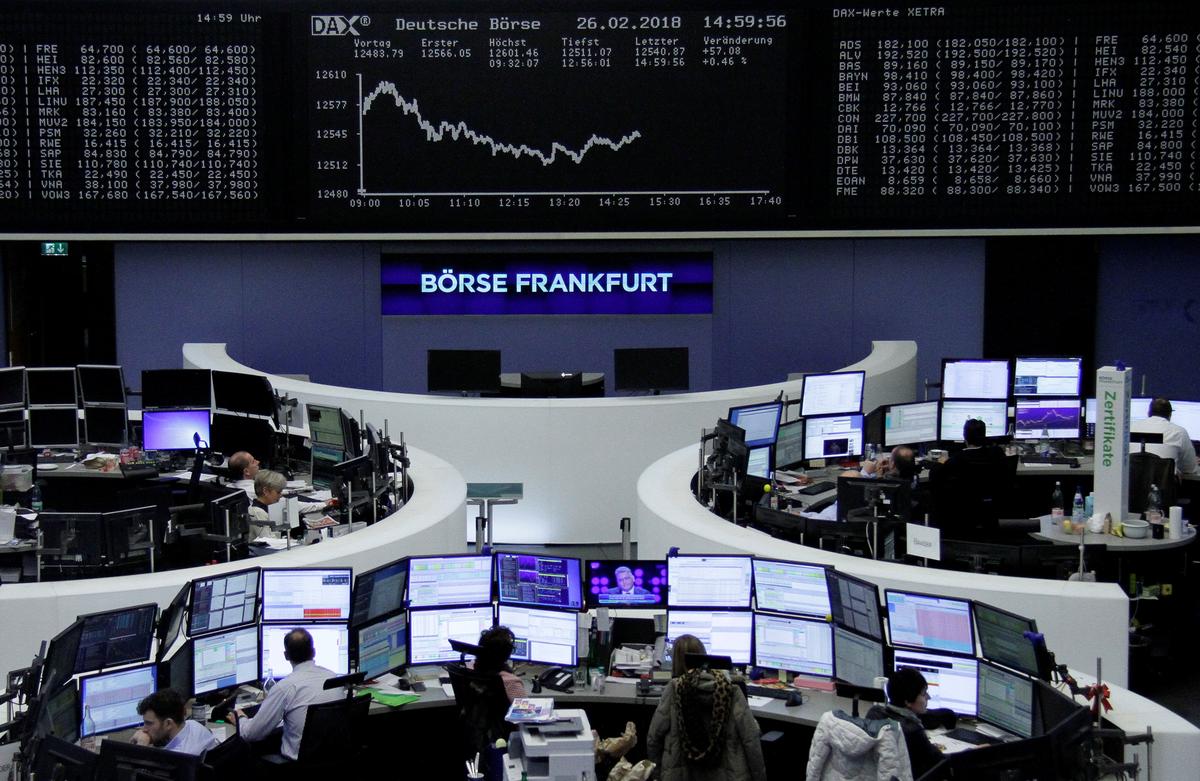 LONDON (Reuters) – World stocks rose to three-week highs on Tuesday, helped by a decline in borrowing costs ahead of Federal Reserve Chairman Jerome Powell’s first testimony before the United States Congress later in the day.

The MSCI All-Country World Index, was up 0.1 percent and set for its third straight day of gains after hitting its highest level since Feb. 5. Though the index remains down over 2 percent for February, it has recovered more than two thirds of the losses sustained in the wake of a drastic selloff early this month.

After gains in opening deals, European shares turned red, with the pan-European STOXX 600 down 0.1 percent. Britain’s FTSE 100 was up 0.1 percent.

Japan’s Nikkei rose 1.1 percent to three-week highs while MSCI’s broadest index of Asia-Pacific shares outside Japan also hit a three-week high before giving up gains on profit-taking in Chinese shares.

The 10-year U.S. Treasuries yield eased to 2.866 percent, dropping further from its four-year peak of 2.957 percent touched on Feb. 21, driven by month-end buying as well as position adjustments ahead of Powell’s testimony.

Powell’s debut appearance is seen as critical for financial markets at a time when many investors are nervous about the Fed’s policy normalization following years of stimulus after the financial crisis almost a decade ago.

Many investors expect the Fed to raise interest rates three times this year, with some pundits predicting four, if U.S. inflation starts to take off, especially as growth is set to get another boost from the Trump administration’s tax cuts and spending plans.

Yet, there are worries higher dollar bond yields could prompt investors to shift funds to bonds from riskier assets, especially when the valuation of the world’s stocks are quite expensive even after their sell-off earlier this month.

A rise in dollar interest rates could also bode ill for potential borrowers, including U.S. home buyers and many companies that have expanded borrowing for years to take advantage of low dollar funding costs.

“The market is a little bit cautious ahead of this speech, but we think he (Powell) is likely to stress the continuity of monetary policy…because it wouldn’t be in his interest to have any major market reactions – that would make his job more difficult,” said Commerzbank currency strategist Anje Praefcke.

“What he’s likely to state is what we’ve seen in the FOMC (Federal Open Markets Committee) minutes: that the outlook for the U.S. economy has improved considerably, short-term, and that both wages and consumer price inflation have recently surprised on the upside.”

Against a basket of currencies, the dollar traded 0.1 percent lower.

Fed funds rate futures <0#FF:> were almost fully pricing in a rate hike at the Fed’s next policy meeting on March 20-21.

“Expectations that Powell will be sensitive to financial markets appear to be running high. But he hasn’t said he will sacrifice policy normalization for the sake of financial markets. I feel there is room for disappointment in markets,” said Hiroko Iwaki, senior bond strategist at Mizuho Securities.

Reporting by Ritvik Carvalho; additional reporting by Jemima Kelly in LONDON and Hideyuki Sano in TOKYO; Editing by Raissa Kasolowsky