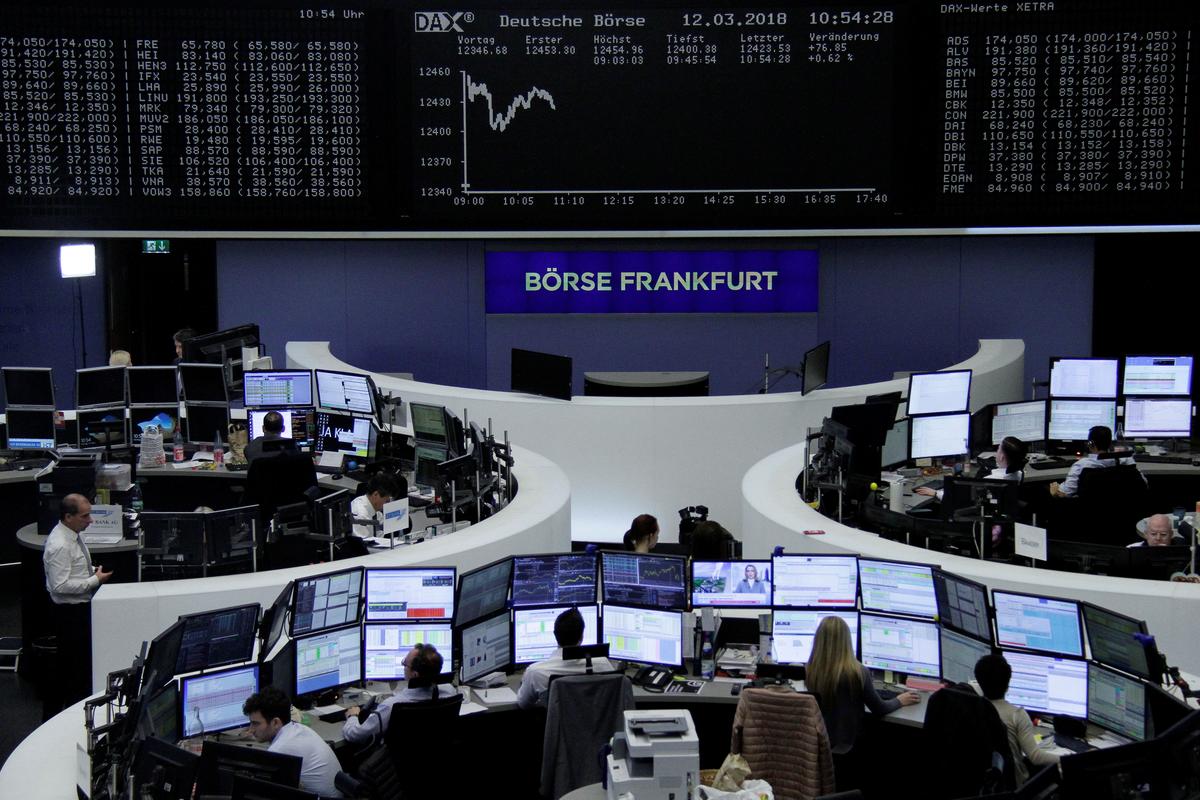 LONDON (Reuters) – World stocks surged to a two-week high on Monday after strong U.S. jobs data at the end of last week helped take the edge off investors’ concerns about the potential outbreak of trade war between the United States and other major economies.

The German share price index, DAX board, is seen at the stock exchange in Frankfurt, Germany, March 12, 2018. REUTERS/Staff/Remote

European shares shot up across the board, following their Asian counterparts, while emerging market currencies strengthened as investors bought up so-called riskier assets and sold “safe haven” securities such as gold and government bonds.

Markets have been cheering Friday’s U.S. non-farm payrolls data which showed a hefty 313,000 rise in jobs, but also revealed that annual growth in average hourly earnings had slowed to 2.6 percent after spiking in January.

This suggested that the world’s largest economy is experiencing a high growth without a corresponding spike in inflation.

This is referred to in the market as a “Goldilocks” trend; giving investors an incentive to buy assets such as equities and high-yield bonds without having to fear tighter central bank policy.

“Friday’s U.S. employment data was about as perfect a set of figures as you can get from a policy maker’s point of view. The increase in jobs was nothing short of amazing,” said Marshall Gittler, a strategist at ACLS Global, a currency strategy firm.

“In other words, it was a ‘Goldilocks’ report: not too hot, not too cold, just right.”

As a result, the S&P500 surged more than 1.7 percent on Friday — its second-best day of the year so far — and futures pricing ESc1 pointed to another day of gains on Monday. The warm glow extended around the globe, with Asian and European shares gaining.

Inflation data from the world’s largest economy is due on Tuesday, and the question is how signs of economic strength may affect the U.S. Federal Reserve’s pace of monetary tightening.

“The jobs report will reinforce the confidence the Fed has on economic momentum – it’s a very solid reading, plus you add a bit of (fiscal) stimulus on top,” said Investec economist Victoria Clarke.

“But they are a cautious institution who will be wary of reading too much into one print.”

Concerns over those tariffs have been weighing on European stocks, with the main pan-European stock index hitting a seven-month low at the start of the month. It has recovered somewhat from that trough to rise 0.3 percent on Monday.

The jobs news also lifted currencies such as the Mexican peso and Canadian and Australian dollars, while weighing on the safe-haven yen.

U.S. officials on Sunday defended Trump’s decision, saying the move was not just for show and not a gift to Pyongyang.

Brent crude LCOc1 gave up some of Friday’s gains, dropping 35 cents to $65.14 a barrel, as rising U.S. output loomed over markets despite a slowdown in rig drilling activity.

Gold prices XAU= also slipped half a percent to $1,315.81 an ounce, as demand for safe haven investments fell.