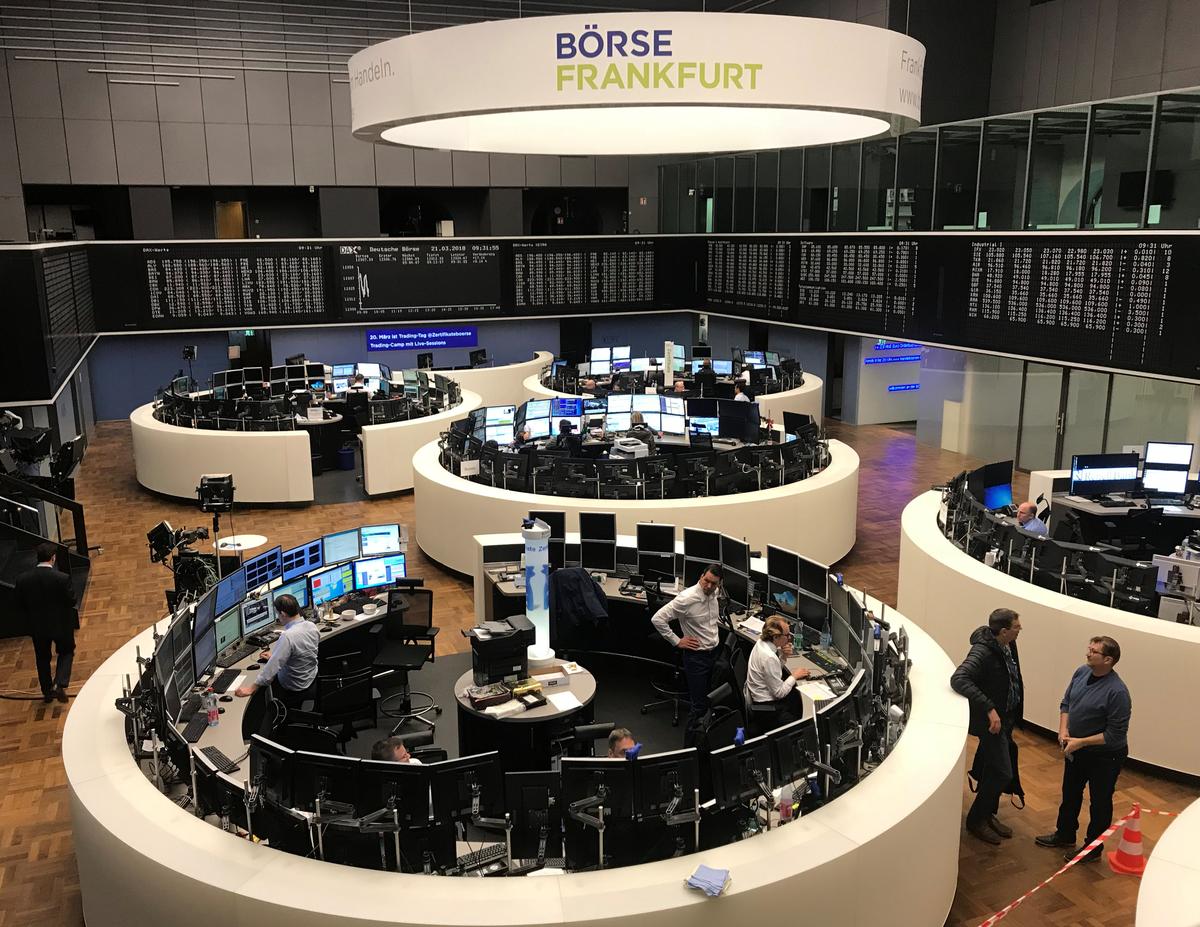 LONDON (Reuters) – World shares fell on Wednesday and the dollar eased off three-week highs as markets awaited a likely increase in U.S. interest rates and guidance on how many more to expect for this year.

The German share price index, DAX board, is seen at the stock exchange in Frankfurt, Germany, March 21, 2018. REUTERS/Tilman Blasshofer

Markets were also spooked by signs of a brewing global trade war – a Wall Street Journal report saying China was planning counter-measures against U.S. trade tariffs. European shares fell and investors scurried for the safety of German government bonds and the Japanese yen.

And equity futures indicated that U.S. stocks, which have been roiled by a hefty selloff in technology shares this week, are set for another weak session ESC1.

The selloff wiped some $50 billion off the value of social media giant Facebook (FB.O), leaving investors on edge as the Federal Reserve prepares to raise U.S. rates for the first time this year.

The Facebook losses, caused by uproar over the alleged misuse of user data, have filtered through the tech sector, with shares in Twitter (TWTR.N) falling more than 10 percent on Tuesday.

A pan-European equity index fell almost 0.3 percent, its early weakness accelerating after the WSJ report on China and a tech shares index reversing an early bounce. The yen, typically bought during times of stress, rose to the day’s high versus the dollar around 106.26 JPY=.

“So far, we have seen low-level (trade) skirmishes, which are not material enough to affect the world economy. But if we see retaliation, and significant trade disruptions, it’s a different order or magnitude, could begin to affect global growth forecasts,” said Andrew Milligan, head of global strategy at Aberdeen Standard Investments.

The tech selloff is a serious setback to markets just as they recover from an early-February selloff, Milligan said, noting tech had been “the leading light of U.S. and Asian equity markets for over a year.”

MSCI’s all-country equity index flatlined MIWD00000PUS>, and is now 6 percent off January’s record highs, pressured by the trade war fears and the possibility that the Fed will tighten policy more than expected.

The U.S. central bank has raised borrowing costs five times since late 2015. Markets are pricing in three rate increases this year, but some reckon policymakers might squeeze in a fourth, triggering a bond and equity selloff.

The 1800 GMT announcement will also be the first under new Fed chair Jerome Powell.

“We might have significant changes in communication compared with what we’ve seen under (previous chair Janet) Yellen,” said Chris Scicluna, head of economic research at Daiwa Capital Markets.

“The economic situation post-tax cuts also justifies a significant shift upwards in the dot plot,” he added, referring to fears the Fed’s de facto policy forecast chart will signal four rate rises rather than three because of the effects of U.S. tax reforms.

Those expectations had sent the dollar to nearly three-week highs on Tuesday, but it eased back a quarter percent against a basket of currencies .DXY on Wednesday, having lost almost half a percent this month.

The dollar’s weakness — it fell 10 percent last year — is at least partly down to U.S. capital seeking to invest overseas amid robust world growth. Milligan said that would continue unless trade skirmishes started hurting the world economy or U.S. growth accelerated further.

“To get the dollar higher, we will need a combination of the Fed being more aggressive and signaling more changes for 2019,” he said.

The WSJ report on potential Chinese tariffs comes as U.S. President Donald Trump prepares to announce on Friday up to $60 billion in import duties on Chinese goods. He imposed tariffs on imported steel and aluminum earlier this month.

This week’s meeting of finance ministers and central banks of the world’s 20 biggest economies failed to diffuse tensions, with the G20 said only it “recognised” the need for more “dialogue and actions”.

The currencies of export-heavy nations such as the Australian, New Zealand and Canadian dollars and most emerging currencies fell.

The Mexican peso was up almost 1 percent against the dollar after reports the United States had dropped a demand that vehicles imported from Canada and Mexico should contain 50 percent U.S. content.

Fears of a trade war have also weighed on commodity prices, though tensions in the Middle East supported oil, lifting Brent futures LCOc1 almost half a percent.

Copper prices in Shanghai fell to their lowest in almost six month, their fourth straight day of losses SCFcv1.

The WSJ report fueled some buying of German bonds, pushing the 10-year yield off the day’s highs. The yield was just one basis point higher on the day at 0.59 percent DE10YT=RR.

Reporting by Sujata Rao; Additional reporting by Swati Pandey in Sydney and Dhara Ranasinghe in London; Editing by Larry King