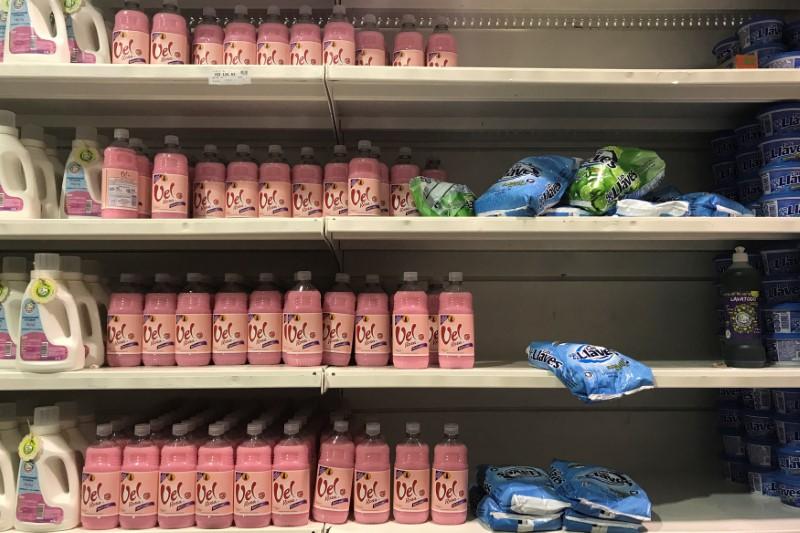 VALENCIA, Venezuela/CARACAS (Reuters) – When Colgate-Palmolive Co’s (CL.N) Venezuelan unit in January raised the price of laundry detergent to keep up with inflation that hit 85 percent the month before, it drew a swift rebuke from the government of President Nicolas Maduro, which demanded a nearly 90 percent price cut.

Price control agency Sundde ordered a reduction of the price of a one-liter container of Vel Rosa detergent to the equivalent of $0.16 from $1.40, according to union leaders and company employees.

In response, Colgate shut the plant that produces it, according to a Feb. 2 letter to Sundde seen by Reuters, saying that operations would be unsustainable on those terms.

When it resumed production a week later after a meeting with Sundde, the results were precisely the opposite of what authorities had sought: Colgate had halved its standard container size for Vel Rosa and was selling it for the equivalent of $0.83, the sources said – effectively raising the price by 19 percent.

The incident highlights how multinational companies in Venezuela have become more aggressive in pushing back against the socialist government’s demands that they sell goods at below production costs as the country struggles under hyperinflation and deepening recession.

Similar pricing disputes since the start of the year have involved companies including Nestle (NESN.S) and Mexican bottler and retailer Femsa (KOFL.MX), according to company employees, as Maduro seeks to stem annual inflation that has unofficially topped 4,000 percent.

The disputes threaten to worsen long-running tensions between the government and the multinationals, and illustrate the difficulty of maintaining a presence in Venezuela in the hopes of a big rebound under a future government.

Thousands of companies across the country have slowed production and at least 20 percent have stopped operating for lack of raw materials or customers, according to the most recent survey by industry association Conindustria.

Foreign companies, betting on the possibility of an eventual recovery, are maintaining minimal operations with skeleton workforces that in some cases show up only to eat at company cafeterias.

Colgate and Sundde did not respond to requests for comment.

Venezuela’s price controls have created tensions with foreign companies since their 2003 introduction by late socialist leader Hugo Chavez, but in those days most disputes were resolved quietly through discrete price increases to compensate for inflation.

Maduro, facing uncontrolled inflation, began the year by ordering supermarkets to roll prices back to December levels, a demand reinforced by Sundde inspectors.

Around the same time, Nestle (NESN.S) announced that its plant that produces a snack known as compote – pureed fruit such as apple, pear or peach mixed with cereal – stopped operating for lack of raw materials.

Union leaders say Nestle has chosen not to import raw materials because it is under orders to sell compote for a quarter of what it had typically fetched in supermarkets.

“Nestle Venezuela always complies with local laws, and is respecting the pricing regulations in all our operations,” Nestle wrote in statement in response to questions. “We are determined to maintain our operations in the country and to continue to support the local communities where we operate.”

Mexico’s Femsa, which bottles and distributes Coca-Cola in Venezuela, was ordered by Sundde to stop increasing soft drink prices – even though they have not been historically covered by price controls, according to two union members who asked not to be identified.

“The company would not accept regulations on the price of soft drinks,” said one of the sources. “They said they would shut down if the prices were regulated.”

Femsa instead agreed to stop increasing the price of bottled water, which is covered by price regulations, while it continues to raise soft drink prices, the sources said.

Femsa did not respond to a request for comment.