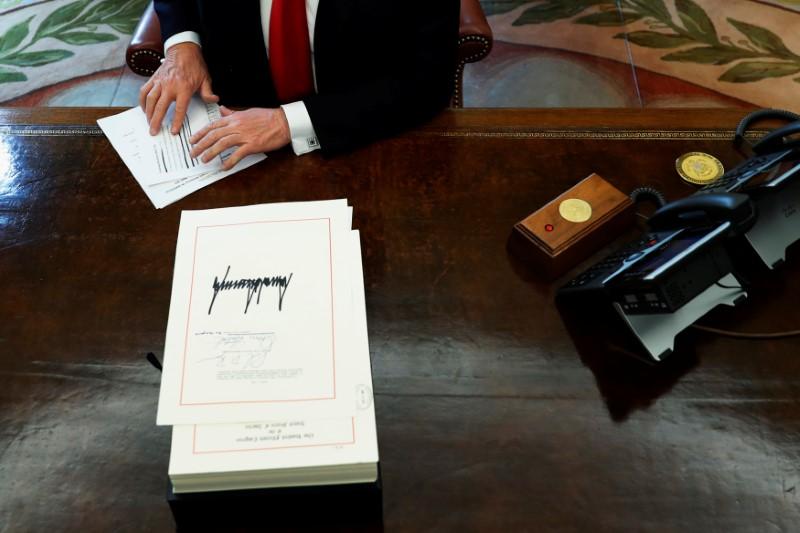 U.S. President Donald Trump sits at his desk as reporters exit after he signed sweeping tax overhaul legislation into law in the Oval Office at the White House in Washington, U.S. December 22, 2017. REUTERS/Jonathan Ernst

Shah, in an interview on Fox Business Network, said details were still being worked out on a potential second tax cut bill that would follow the massive $1.5 trillion legislation that took effect in January.

That tax package, the largest such overhaul since the 1980s, reduced the tax burden for most individuals starting this year but set them to expire after 2025.

Republicans, who control both chambers of Congress, passed the sweeping overhaul in late December, handing Trump his first major legislative win ahead of the November midterm elections. Democrats decried it as a giveaway to the wealthy that will widen the income gap between rich and poor, while adding to the nation’s $20 trillion national debt.

Still, any follow-on proposal is likely to take a while, with Congress pressed to pass a government budget bill before funding runs out March 23 and lawmakers eager to hit the campaign trail ahead of the Nov. 6 vote.

“We don’t have specifics regarding an actual proposal or a timeline just yet,” Shah said, adding that the White House would wait for the arrival of Larry Kudlow, incoming director of the White House national economic council.