NEW DELHI (Reuters) – A day after U.S. retail giant Walmart (WMT.N) struck its largest deal with a big ticket investment in Indian online marketplace Flipkart, a right-wing Hindu group that fears small traders will suffer staged a protest in New Delhi calling for the deal to be scrapped.

Walmart said on Wednesday it would pay some $16 billion for a roughly 77 percent stake in the Indian e-commerce firm, stepping up competition with rival Amazon.com (AMZN.O) in a major growth market.

While Thursday’s protest was small and unlikely to affect the deal, such sentiments pose a challenge for Indian Prime Minister Narendra Modi and his Hindu nationalist Bharatiya Janata Party (BJP) as it prepares to fight an election next year.

For Modi, appeasing small traders and farmers, who are part of the BJP’s core constituency, is as important as upholding India’s image as a place that welcomes foreign investment.

Officials have been advised not to comment on the Walmart-Flipkart deal, a senior government official said. The ruling party has previously opposed foreign direct investment in the multi-brand retail sector.

“Politically, the government may find it difficult to digest the deal,” the official said.

The Communist Party of India (Marxist) also taunted the Modi government, noting the BJP had decried such investments when it was in the opposition and accusing it of betraying promises. 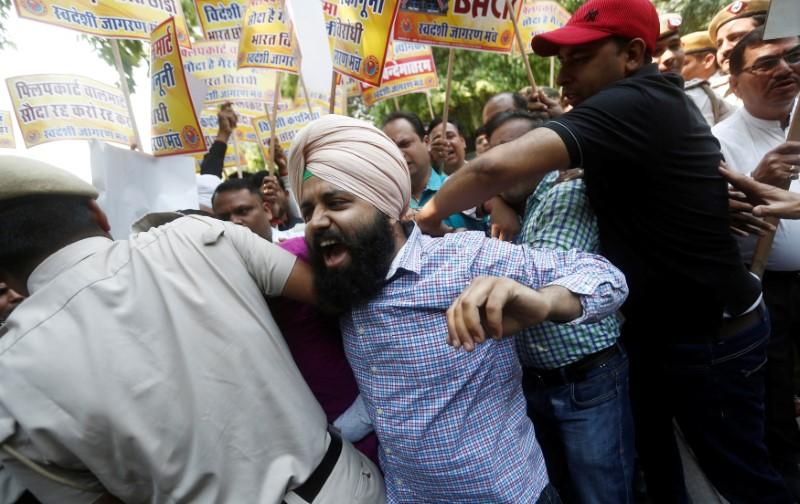 Officials in the Prime Minister’s office did not respond to calls by Reuters for comment.

According to the deal, Walmart’s investment is in Flipkart’s online marketplace platform, where foreign investment is allowed. The U.S. company cannot open physical stores in India, according to rules governing the multi-brand retail sector.

However, Walmart’s CEO Doug McMillon told media in New Delhi on Thursday that it was open to the idea of setting up stores via a franchise model in the future. It already operates wholesale stores in the country.

“We can be very flexible. I think as a company not just in India, but around the world, the concept of franchising isn’t out of bounds,” said McMillon, adding Walmart was not yet ready to make any such announcements.

That could fan fears of some trader and farmer groups, who contend the U.S. company is using the deal as a back-door entry into India’s bricks and mortar retail market, and that it could squeeze out small corner shops that dominate Indian retail.

Some 80 people gathered outside a Delhi hotel holding placards reading “Walmart Go Back!” and shouting slogans asking people to ditch imported products for Indian-made goods. Inside the hotel, McMillon was talking to a dozen journalists about the deal.

“Whoever is protesting also has a story to tell. If you look at our history as a country, there was a history of colonialism. And there is always a fear that you start with trade and then it becomes control,” said Devangshu Dutta, head of retail consultancy firm Third Eyesight.

The protesters were from the Swadeshi Jagran Manch (SJM), a nationalist group linked to Rashtriya Swayamsevak Sangh (RSS), the ideological parent of Modi’s party. The group has said the deal is against “national interests” and will hurt Modi’s “Make in India” drive.

It has also written to Modi asking the government to intervene.

Separately, a traders’ union, the Confederation of All India Traders (CAIT) said that it may consider taking legal action against the two companies or lodging a complaint with the country’s competition watchdog, depending on how the deal was structured.

Traders say they are most concerned about predatory pricing and steep discounting by e-commerce firms with deep pockets thanks to foreign funding that could edge out smaller rivals.

“Already offline trade is deeply hurt by e-commerce as there is no policy or regulatory mechanism to govern those companies,” said Praveen Khandelwal, secretary general of CAIT. “It is a free-for-all game and ultimately it is the offline trade which is feeling the pinch.”

Additional reporting by Adnan Abidi and Euan Rocha in New Delhi and Sankalp Phartiyal in Mumbai; Editing by Alex Richardson