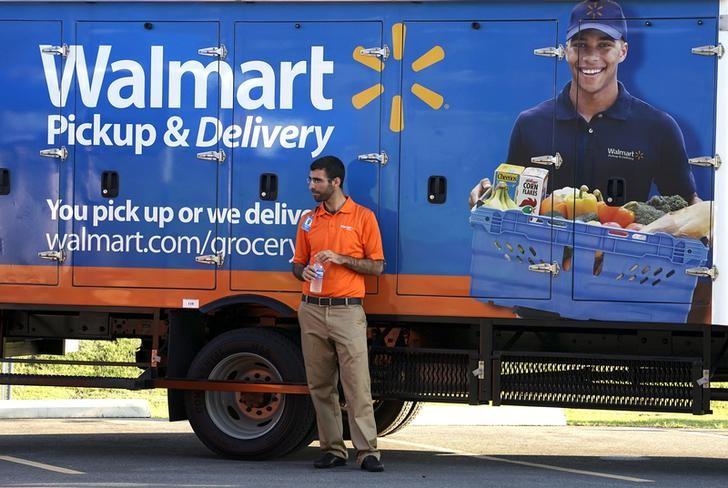 NEW YORK (Reuters) – Walmart Inc (WMT.N) will expand its grocery home delivery services to more than 100 metro areas this year from an existing six cities as the retailer steps up a fight against rival Amazon.com Inc (AMZN.O).

A Wal-Mart Pickup-Grocery employee waits next to a truck at a test store in Bentonville, Arkansas June 4, 2015. REUTERS/Rick Wilking

Walmart said on Wednesday the service would be rolled out to more than 40 percent of U.S. households by the end of the year. Deliveries will cost $9.95 with a minimum $30 order and companies like Uber Technologies Inc [UBER.UL] will provide transport. Other delivery companies will be added later this year.

“We will be pretty aggressive with it,” said Tom Ward, vice president of digital operations on a call with reporters.

The move will complement Walmart’s rollout of curbside grocery pickup, which is currently available in 1,200 stores and will be added to a 1,000 more stores this year. It also allows Walmart to compete with Amazon’s two-hour Prime Now service for shoppers of its loyalty program.

The expanded service allows the Bentonville, Arkansas based retailer to get its store shoppers to transact with the company online, where they spend twice as much. It also comes at a time of intense competition within the grocery space and follows Amazon’s purchase of Whole Foods last year.

Amazon has also expanded food delivery options from Whole Foods in six metro areas over the past month. Walmart’s other brick-and-mortar rivals like Kroger Co (KR.N) and Target (TGT.N) have invested in similar services.

Online revenue growth slowed at Walmart in the most recent quarter, causing some analysts to question its strategy to compete with Amazon. Company officials said Walmart was still on track to increase its e-commerce sales by 40 percent this year.