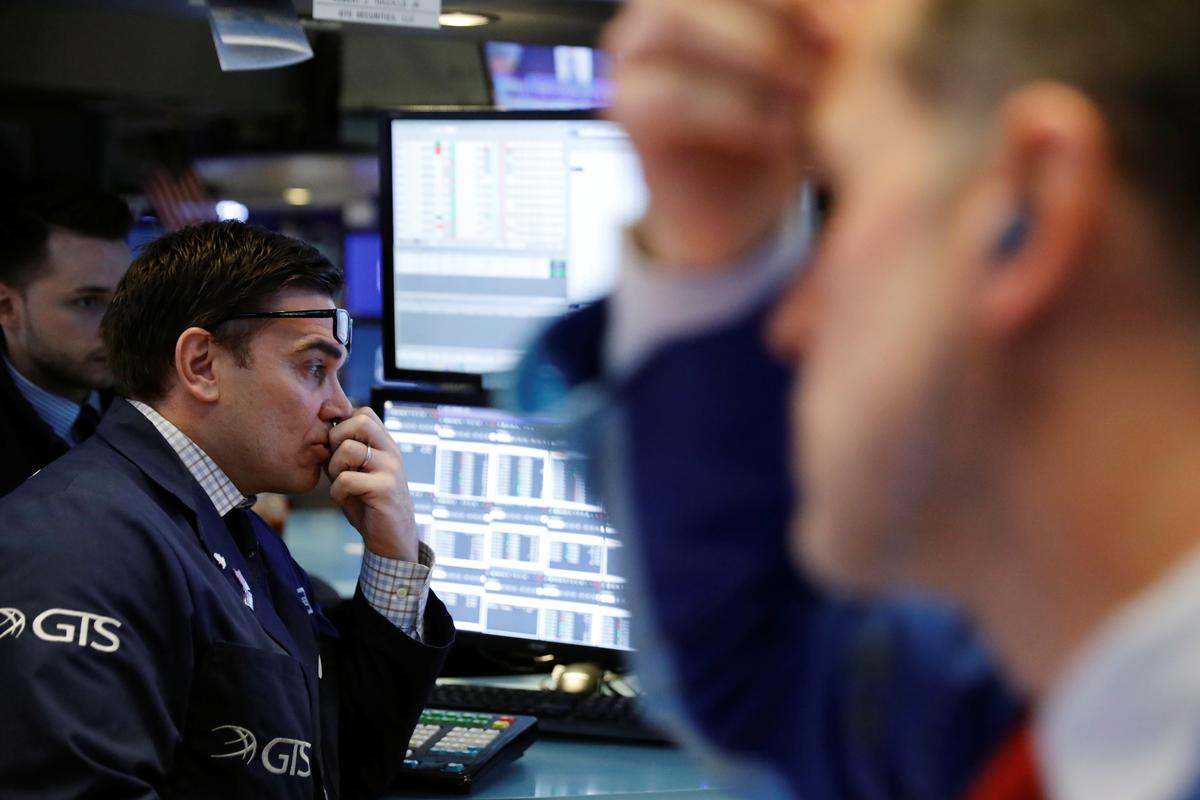 SAN FRANCISCO (Reuters) – Outsized returns delivered by Amazon.com (AMZN.O), Netflix (NFLX.O) and other heavyweight technology stocks have made them heroes on Wall Street, but some strategists warn that investors’ reliance on them exacerbates the risk of a steep downturn.

Traders work on the floor of the New York Stock Exchange shortly after the opening bell in New York, U.S., March 1, 2018. REUTERS/Lucas Jackson

Amazon’s 35 percent surge in 2018 has pushed its market capitalization up to $770 billion, equivalent to 3 percent of the S&P 500 and close behind Apple’s nearly 4 percent share of the index.

Apple (AAPL.O), Facebook (FB.O), Amazon, Netflix and Google-parent Alphabet (GOOGL.O) have grown their collective market value by more than 40 percent in the past year to $3 trillion, and they now account for a quarter of the Nasdaq Composite Index .IXIC.

(For a graphic on how FANG + Apple now accounts for a quarter of the Nasdaq click reut.rs/2FEUeSf)

Technology stocks have been widely viewed in recent months as a “crowded trade,” a situation where most investors have the same opinion, increasing the potential for a volatile selloff if sentiment changes.

“It’s a big momentum trade, investors don’t care if they’re paying 15 or 20 or even 50 times earnings,” said Mike O’Rourke, Chief Market Strategist at JonesTrading. “The problem is, once those names start giving up those gains, then the market starts to have problems.”

Investors have been attracted to those stocks for good reason: Amazon’s revenue ballooned 31 percent to $178 billion last year, while Netflix is expected by analysts on average to more than double its net income to $1.2 billion in 2018.

An expected interest rate hike by the U.S. Federal Reserve on Wednesday may not have a strong effect on technology companies, which generally rely less than other kinds of companies on debt.

The S&P 500 information technology index .SPLRCT dipped by an average of 0.3 percent in the five-session period following the Fed’s four most recent rate hikes, in line with S&P 500, according to Thomson Reuters data.

Investors nervous about how much longer a nine-year bull market can last have favored big tech names as among the most reliable on the stock market because their business models are often viewed as disruptive and less susceptible to economic downturns, at least over the long run.

“If you ask anyone right now, if it’s a business owner they’ll say they’re afraid of Amazon. If they’re an investor, they’ll tell you Amazon is going up forever,” said Andrew Bodner, president of Double Diamond Investment Group in Parsippany, New Jersey.

“Overall, it creates more volatility for the market because everyone owns Amazon, and if Amazon goes down you’ll see that reflected,” Bodner said.

Investors’ increased reliance on passively managed index funds has also contributed to the rally in technology shares because the companies’ inclusion in the S&P 500 and other indexes means money will be poured into them even if they have expensive earnings multiples, O’Rourke said.

Momentum for some major technology stocks is already showing signs of moderation. Facebook has fallen 5 percent after hitting a record high at the start of February, with some investors worried that people are spending less time on the social media platform.

Posing a potential threat to the rally, the S&P 500 technology index is trading at a relatively expensive 18.8 times expected earnings, 12 percent above its 15-year average, according to Thomson Reuters Datastream.

While S&P 500 information technology earnings per share are expected to grow by a healthy 17.5 percent this year, that’s less than last year’s 20.8 percent surge and lower than the 19.5 percent earnings expansion expected for the entire S&P 500, according to Thomson Reuters I/B/E/S. Technology companies may be benefiting more modestly than others from corporate tax cuts enacted this year, according to CFRA investment strategist Lindsey Bell.

Even as the S&P 500 wavered over worries that President Donald Trump might spark a trade war, the Nasdaq on Monday closed at a record high, more than bouncing back from a deep selloff across Wall Street only a month ago.

“People are going with what works, and if tech was working before the shakeout in February, then they’re going to stay in it,” said Joe Saluzzi, co-manager of trading at Themis Trading in Chatham, New Jersey.