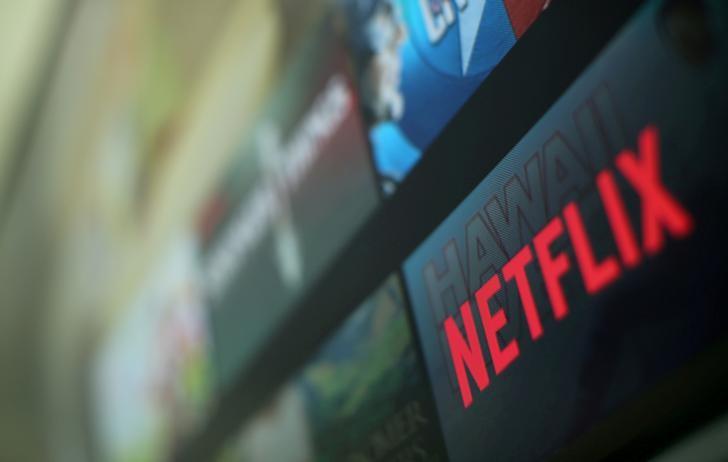 (Reuters) – Netflix Inc’s (NFLX.O) 65 percent jump so far in 2018 has been so fast that Wall Street analysts earlier this week were as much as $60 behind the curve on a stock most say is a buy.

The Netflix logo is pictured on a television in this illustration photograph taken in Encinitas, California, U.S., on January 18, 2017. REUTERS/Mike Blake/Files

The online video streamer’s shares have remained well above analysts’ average 12-month target for much of this year, and the gap between the actual share price and the mean target hit a two-year high earlier this week, as the graphics below show.

Like the other FAANG technology stocks, Netflix shares have soared over the past few years, driven by subscriber growth.

While the mean 12-month price target that brokerages have on the shares of Amazon.com Inc (AMZN.O), Facebook Inc (FB.O), Google-owner Alphabet (GOOGL.O) and Apple Inc (AAPL.O) are a little above their actual share price, in contrast the mean target for Netflix is well below its current share price.

That suggests either that shares in the video streaming pioneer are spectacularly overbought, or Wall Street’s biggest names have a lot of work to do.

Three brokerages scrambled to raise their price targets this week, with Pivotal Research raising its target by $100 to $400, while UBS raised its target by $50 to $345.

One of the top-rated analysts for the stock, Stifel’s Scott Devitt, cut Netflix from “buy” to “hold” on Thursday while raising his target to $325 from a previous $283.

“We are attracted to Netflix’s business and competitive

position but believe share price may have sprinted ahead of fundamentals in the short-term,” Devitt said.

Netflix’s shares have an intrinsic valuation of $54.95, according to Thomson Reuters data. The stock closed on Thursday at $317, nearly six times that number.