MAIQUETIA, Venezuela (Reuters) – Venezuela’s domestic airline industry is struggling to maintain operations due to hyperinflation and shortages of spare parts, according to an industry association, making it increasingly hard to obtain tickets and causing chronic flight delays.

That comes atop a steady withdrawal since 2016 of international airlines, many of which left Venezuela after years investing in what was once one of Latin America’s richest countries.

He added that airlines have cut services because they cannot obtain dollars through the country’s currency control system.

“We don’t have replacement parts because the government is not able to provide the hard currency we need,” said Alvarez, a former airline executive.

“If I don’t have dollars, I can’t offer better service.”

Avior and Laser did not respond to requests for comment. Reuters was unable to obtain comment from Conviasa.

The Information Ministry did not respond to a request for comment.

Ticket prices are fixed by the government in the local bolivar currency while replacement parts must be purchased abroad in dollars. With the bolivar depreciating rapidly, airlines are left unable to afford the parts needed to keep up maintenance, Alvarez said.

For domestic flights, airlines now typically sell only one-way tickets. When people want to return home from a trip, they usually have to line up at the airport on the day they hope to travel.

Ismelida Fernandez said she flew to Caracas from Margarita Island with her sister to get treatment for a brain tumor and had to wait 24 hours to get a return ticket.

“My sister was crying all night from the pain in her head,” said Fernandez, at the Maiquetia airport outside Caracas last week. She said she was still on a waiting list to fly home, adding, “It makes me feel completely helpless.”

President Nicolas Maduro blames the country’s crisis on an “economic war” that he says is orchestrated by political adversaries with the help of Washington.

Critics of the leftist president say the problems are the result of the government’s currency and price controls as well as declining production of oil, which provides almost all of the OPEC nation’s hard currency.

Airlines are not allowed to sell tickets for domestic flights above the prices set by the government. Flights generally cost about half the price of a taxi ride to the airport.

But getting hold of tickets usually requires buying them from intermediaries for more than double their list price.

“Regulations make domestic flights unprofitable,” said Nicola Furnari of travel and tourism industry association Avavit. “The problem is that the real prices are well above what the average Venezuelan can afford.”

But Ceveta’s Alvarez said even with hard currency income, domestic airlines struggle to buy the parts they need because they cannot get credit.

At the Maiquetia airport, groups of people routinely wait for two or three days, sitting on their suitcases or on the ground, in hopes of getting on a flight.

“It’s terrible, terrible,” said Carlos Araujo, 33, who said he had waited 24 hours to buy a ticket to visit his grandmother in hospital. 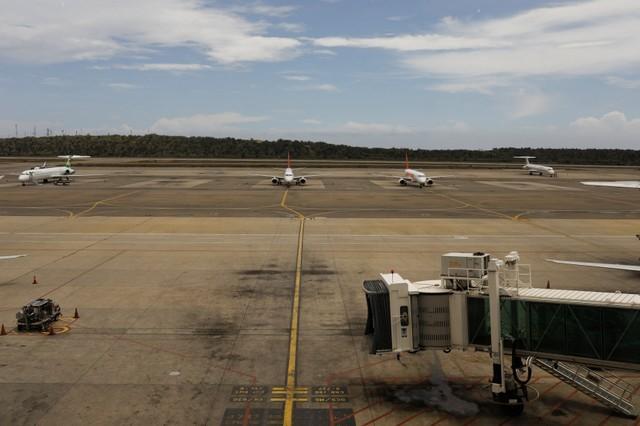