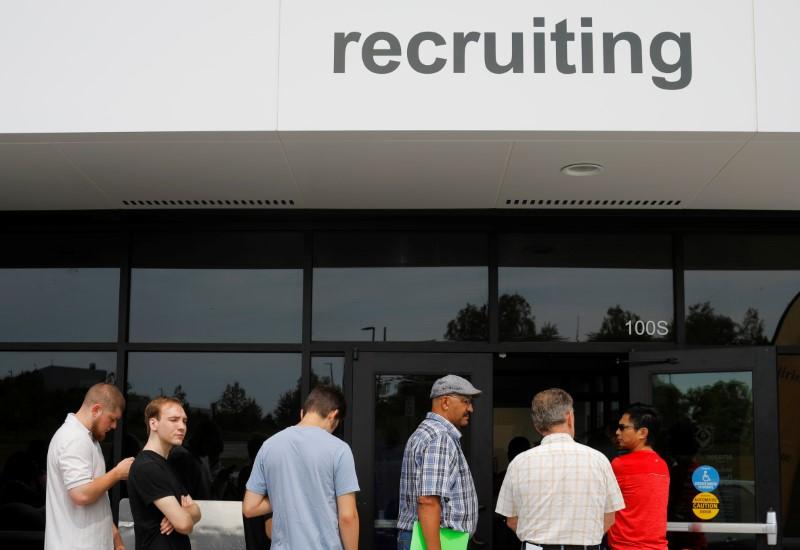 WASHINGTON (Reuters) – The number of Americans filing for unemployment benefits unexpectedly rose last week, but the increase was marginal, suggesting strong job growth in March that should underpin consumer spending.

FILE PHOTO – Job seekers line up to apply during “Amazon Jobs Day,” a job fair being held at 10 fulfillment centers across the United States aimed at filling more than 50,000 jobs, at the Amazon.com Fulfillment Center in Fall River, Massachusetts, U.S., August 2, 2017. REUTERS/Brian Snyder

Initial claims for state unemployment benefits increased 3,000 to a seasonally adjusted 229,000 for the week ended March 17, the Labor Department said on Thursday. Data for the prior week was unrevised. Claims dropped to 210,000 during the week ended Feb. 24, which was the lowest level since December 1969.

Economists polled by Reuters had forecast claims dipping to 225,000 in the latest week. Claims have now been below the 300,000 threshold, which is associated with a strong labor market, for 159 straight weeks. That is the longest such stretch since 1970, when the labor market was much smaller.

The labor market is considered to be near or at full employment. The jobless rate is at a 17-year low of 4.1 percent, not too far from the Federal Reserve’s forecast of 3.8 percent by the end of this year.

The U.S. central bank raised interest rates on Wednesday and forecast at least two more hikes for 2018, in a vote of confidence in the economy. The Fed said it expected that “labor market conditions will remain strong.”

The Labor Department said claims for Maine and Colorado were estimated last week. It also said claims-taking procedures in Puerto Rico and the Virgin Islands had still not returned to normal after the territories were devastated by Hurricanes Irma and Maria last year.

The four-week moving average of initial claims, viewed as a better measure of labor market trends as it irons out week-to-week volatility, rose 2,250 to 223,750 last week. The claims data covered the survey period for March non-farm payrolls.

The four-week average of claims fell 1,750 between the February and March survey periods, suggesting another month of solid job gains. The economy created 313,000 jobs in February.

Economists are optimistic that tightening labor market conditions will start boosting wage growth in the second half of this year. That should help to support consumer spending, which slowed at the start of the year.

The claims report also showed the number of people receiving benefits after an initial week of aid declined 57,000 to 1.83 million in the week ended March 10.

The four-week moving average of the so-called continuing claims dropped 11,750 to 1.88 million.