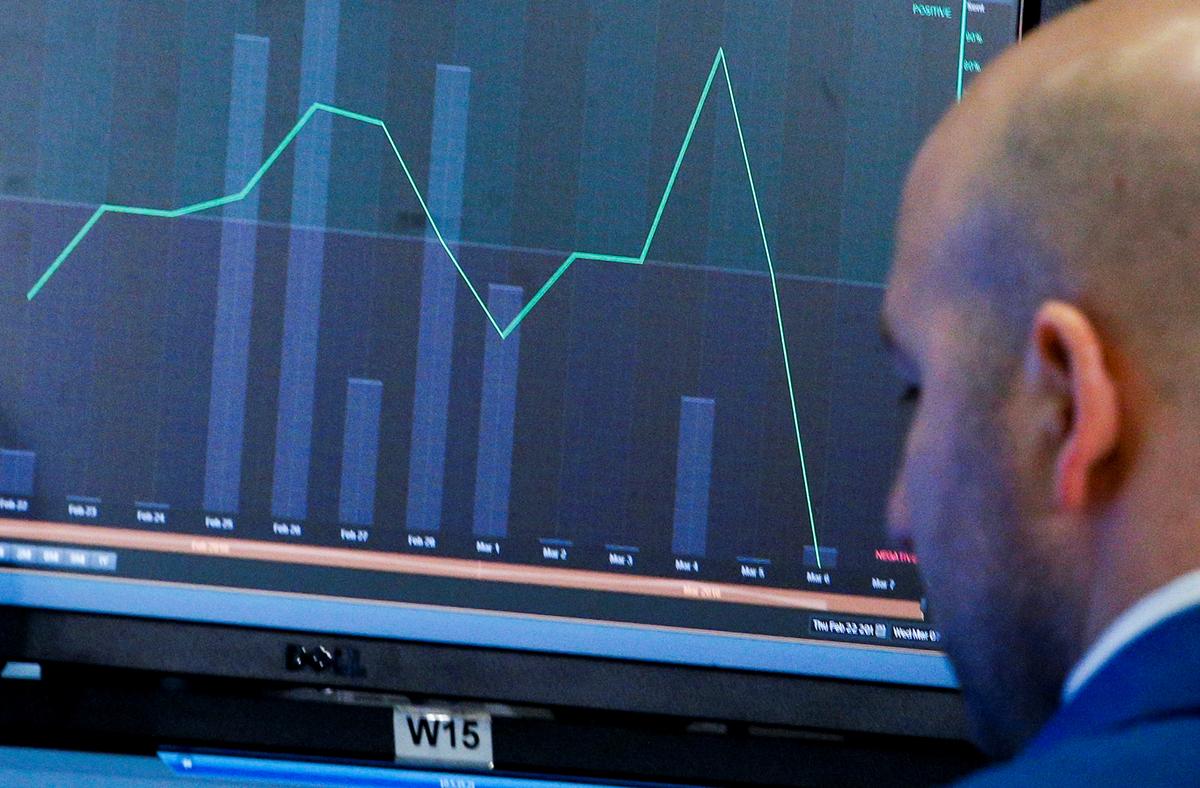 NEW YORK (Reuters) – Cracks have been surfacing in the junk bond market.

FILE PHOTO – A specialist trader works at his post on the floor of the New York Stock Exchange, (NYSE) in New York, U.S., March 7, 2018. REUTERS/Brendan McDermid

Returns on leading high-yield indexes are down and cash outflows are rising, as are short interest bets against the asset class. In addition, investor protections have shown signs of improvement, suggesting junk bond issuers are being forced to offer better terms to attract interest.

“Valuations are, in aggregate, stretched,” Greg Peters, senior portfolio manager at PGIM Fixed Income, which has $709 billion in assets, said on Monday. “We have definitely taken down our overall risk profile.”

Bargaining power has long been in the hands of junk-bond issuers, which have been one of the biggest beneficiaries of ultra-low rates set by the Federal Reserve.

Junk bonds are non-investment grade securities, rated Ba or below by Moody’s Investor Service. The lower the rating, the greater the default risk. Some investors like them because in today’s market there are not a lot of options for finding yield.

Since 2011, investor protections, called covenants, have been deteriorating, according to the Moody’s Covenant Quality Index (CQI). And yet, investors’ insatiable appetite for yield has led them to high-yield bonds, where the average spread of those bonds collapsed to a new low of 331 basis points over U.S. Treasuries in late January, according to ICE Bank of America Merrill Lynch data. That collapse was bad for junk bond investors because the yield on bonds is now much lower, but it did provide a short-term benefit for those who were already holding junk because prices rose.

The situation on investor protections has been changing, however.

The yield on the ICE BAML index that tracks U.S. junk bonds rose 28 basis points in February to its highest level since December 2016. It now stands at 3.53 percent.

Research done by Martin Fridson, chief investment officer at Lehmann Livian Fridson Advisors, shows a strong correlation between the yield on the ICE BAML index and better covenant scores. “The index’s yield rose in February, so that implies some hope for improvement in covenant strength,” said Fridson.

Covenants on bond issuances typically limit the amount of debt a company can take on, which reduces the risk of default and limits the losses of investors in the event of a default.

But investors were starved for yield in the low-rate environment after the financial crisis of 2008-09, which so increased demand for high-yield products that issuers could afford to offer increasingly worse deals.

Though January’s score was worse than December’s, and remained in dire territory for the ninth straight month, there are several reasons why covenant quality nevertheless seems to be improving.

The highest-rated junk bonds – double-B rated – typically have the worst covenant quality as they are less likely to default – but the score for those bonds improved in January. Furthermore, those higher-rated bonds made up over half of all junk offerings in January, versus about a quarter in December, lowering the monthly score.

Finally, the percentage of lowest-rated bonds – those ranked from single-B to triple-C rated and which are most likely to default – with weak covenants continued to decline in January.

The spread to Treasuries from bonds rated single-B currently stands at 72 basis points over the benchmark yield. The spread for triple-C rated bonds and below is 495 basis points.

As the Fed has begun to withdraw liquidity, distressed companies become more likely to default. Offering better terms may signal an acknowledgement of that possibility.

Covenants are not the only indication junk bonds are in for a rocky road. Nervous investors yanked $525 million out of high-yield bond funds the week of Feb. 26, the eighth straight week of withdrawals, according to Lipper.

In 2018 alone, they have pulled $6.15 billion from the two most popular funds, the iShares iBoxx and SPDR Bloomberg Barclays U.S. high-yield products.

Short positions against the three largest junk bond ETFs rose to an all-time high of $7 billion in the last week of February, according to IHS Markit.

Still, the U.S. economy will have to soften before junk bonds deteriorate significantly. “The junk rally may be over, but it’s not clear how quickly spreads (between the yield on junk and on Treasury bonds) will widen,” said Fridson.

It may be sooner rather than later, if the rise of covenant-lite bonds, which have no investors protections at all, are an indicator of approaching recession.

Before the 2008 crisis, covenant-lite issuances peaked.

They now make up 34 percent of speculative-grade bonds, versus 11 percent in 2011, when Moody’s first began recording the data.

If, during the next recession, those over-leveraged junk-rated companies are allowed to fail, investor protections could make a comeback. But if the Fed adopts its 2008 strategy of flooding the market with liquidity, investors will suffer.