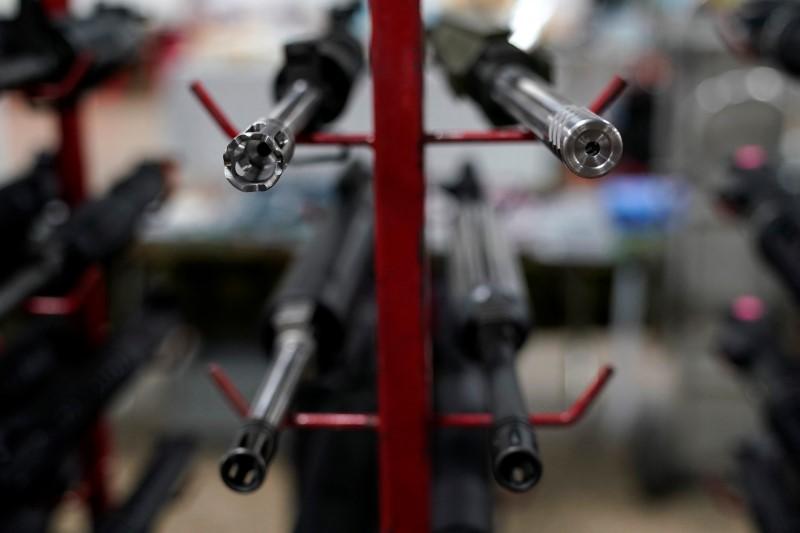 NEW YORK (Reuters) – In the three weeks since America’s deadliest high school took the lives of 17 students and teachers, companies such as Delta Air Lines Inc and Dick’s Sporting Goods Inc have cut ties with gun-rights groups or restricted sales of weapons.

The barrels of AR-15 rifles are displayed for sale at the Guntoberfest gun show in Oaks, Pennsylvania, U.S., October 6, 2017. REUTERS/Joshua Roberts

National outrage over the Feb. 14 massacre in Parkland, Florida, and protests by social media-savvy student activists and survivors of the mass shooting, sparked hope that a tipping point had been reached in America’s long-running debate over gun safety.

But investors trying to send an anti-gun message are discovering challenges, as a number of U.S. mutual fund companies and public pension plans show little desire to move away from their passive investments in popular index funds that carry firearms-related stocks, analysts and plan administrators told Reuters.

“At the end of the day investors are going to have a limited influence because there’s only so much companies will do to change their business model,” said Todd Rosenbluth, director of mutual fund research at New York based CFRA.

More than $11.7 trillion in assets is invested in funds that track passive indexes, according to S&P Capital, leaving gunmaker stocks a staple in many American’s retirement funds.

Among funds that focus on small companies, meanwhile, $2 out of every $3 invested has exposure to gun stocks, according to fund-tracker Morningstar.

BlackRock, the world’s largest fund manager with more than $6 trillion in assets, said it planned to grill gunmakers and retailers on how well they monitor firearm sales and use, oversight that gun safety advocates welcomed. BlackRock said on Friday that it was exploring new index-based portfolios that would exclude gunmakers and retailers.

Yet Rosenbluth said investors have been slow to walk away from funds that include gunmakers.

“People are going into indexes because they want broad, well-diversified products that are representative of the marketplace,” he said.

They are buying shares of retailers that have announced restrictions on gun purchases, such as Wal-Mart Inc, and plan to vote on future shareholder resolutions that shape what type of weapons a company stocks.

The ability to help shape a company’s strategy “all depends on whether you are an owner. If you omit that, then you forgo your ability to influence,” she said.

“It’s our money and I think we should be part of the conversation about where the money goes,” Broward Teachers Union President Anna Fusco told Reuters. “We definitely don’t want to breed and grow the gun problem that’s happening with these assault rifles.”

In New Jersey, lawmakers introduced legislation to block public pension fund investments in any gunmaker. And the State of Michigan Retirement Systems (SMRS) dropped $2 million of chemical and ammunition maker Olin Corp shares from its $70 billion portfolio, Ron Leix, spokesman with the Michigan Department of Treasury, said in an email.

“The amount was very insignificant and we wanted to focus on meaningful investments that benefit the members of the SMRS,” Leix said.

Most U.S. funds with holdings in gun companies have shown little immediate indication they would change their investment models to exclude firearms companies, however.

Officials with Florida’s State Board of Administration, which manages the state’s $160 billion retirement fund for teachers and other public employees, said its equity holdings were invested in broad indexes, making it expensive to single out gun stocks for divestment.

In Washington, the Republican-controlled Congress has effectively blocked meaningful gun legislation, although 66 percent of U.S. voters support stricter gun laws, according to a Quinnipiac University poll released Feb. 20. The powerful National Rifle Association (NRA) group has long lobbied for no restrictions to the constitutional right to bear arms.

Gun rights advocates doubt the renewed push for gun control after the Parkland shooting will have substantial impact on the firearms industry. Background checks for firearm purchases, an indicator of sales, rose in February to approximately 2.3 million, a 14.9 percent jump from the month before, according to the FBI.

“People have been riding the demise of the firearms industry for many years, and the firearms industry is doing quite well,” said Lawrence Keane, senior vice president for government and public affairs for the ‎National Shooting Sports Foundation, a trade group representing gun and ammunition companies. “We’ve seen this before.”