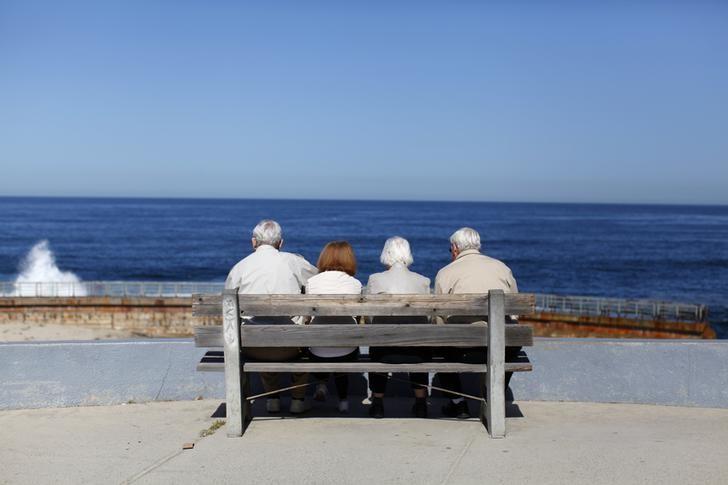 FILE PHOTO – A pair of elderly couples view the ocean and waves along the beach in La Jolla, California March 8, 2012. REUTERS/Mike Blake

Assets in collective investment trusts, or CITs, run by T. Rowe Price Group Inc soared 54 percent last year to $88.9 billion. And assets in 16 CITs managed by Fidelity Investments rose 31 percent to $85.6 billion, according to a Reuters analysis of U.S. Department of Labor reports.

The trend reflects a broader shift of money from more expensive funds run by stock-pickers to cheaper options that passively track indexes. Actively managed funds suffered $207.5 billion in net withdrawals across the United States last year, according to Morningstar Inc.

“What we have seen is a migration from higher cost mutual fund shares to what we call the i-class, and then to collective investment trusts,” Scott David, head of T. Rowe’s individual and retirement plan services, said during the company’s investor day last month.

T. Rowe clients made net withdrawals of nearly $6 billion from the Baltimore-based company’s actively managed funds last year, while Fidelity saw $47 billion in outflows from those funds. The firms are No. 4 and No. 2, respectively, in terms of U.S. actively managed mutual fund assets.

CITs have been around for nearly a century, but have only grown meaningfully in recent years. They cost less because they are not regulated by the U.S. Securities and Exchange Commission, and therefore do not have to provide prospectuses or install independent boards of directors, removing layers of expense.

CITs are expected to become even more popular as investors continue to embrace cheaper retirement options.

The move, expected this year, would save nearly 20,000 participants currently invested in Contrafund about $550,000 a year in combined expenses, or nearly $30 per participant. The expense ratio would drop as much as 17 percent, according to retirement plan officials.

Launched just four years ago, The Contrafund CIT currently has $22 billion in assets, doubling in the span of two years, U.S. Department of Labor reports show. Its investors are a who’s who of blue-chip company retirement plans, including Apple Inc, General Motors and Microsoft Corp.

Overall, assets in CITs could top $3 trillion this year, outpacing the growth of the overall retirement market, according to ALPS, a subsidiary of software and research firm DST Systems Inc.

Although CIT regulation operates through a patchwork of oversight from the Labor Department, the Internal Revenue Service, state banking divisions and the Office of the Comptroller of the Currency, legal experts say investment trusts do not pose major risks to investors.

“There’s no independent board, but the mindset of the asset managers is to treat clients the same, regardless of regulatory regime,” said Scott Webster, a partner at law firm Goodwin Procter LLP who has dealt with CIT matters for more than 20 years.