NUSA DUA, Indonesia (Reuters) – The United States sought to make currency a central part of any solution to a bruising trade fight with China, keeping the pressure on Beijing to speed up economic reforms at a gathering of world policy makers who pledged to do more to safeguard global growth.

“China will continue to let the market play a decisive role in the formation of the RMB exchange rate,” Yi said in the statement “We will not engage in competitive devaluation, and will not use the exchange rate as a tool to deal with trade frictions.”

A communique issued by the IMF’s member countries on Saturday – which followed fresh tumult in financial markets – also sought to soothe nervous investors with a pledge to step up their dialogue on trade issues.

U.S. Treasury Secretary Steven Mnuchin said on Saturday that Chinese officials told him that further yuan depreciation was not in China’s interests. He told Reuters in an interview on Friday that currency issues needed to be part of U.S.-China trade talks.

“We want to make sure that (yuan) depreciation is not being used for competitive purposes in trade,” Mnuchin told reporters on Saturday.

The yuan [CNY=CFXS] has fallen more than 8 percent against the dollar since the end of April to about 6.91 on Friday, close to the psychologically important 7.0 level not seen in a decade.

In the communique from the International Monetary and Financial Committee, the Fund’s member countries also agreed to debate ways to improve the World Trade Organization so it can better address trade disputes.

“We acknowledge that free, fair, and mutually beneficial goods and services trade and investment are key engines for growth and job creation,” the IMFC said in the statement.

“We will refrain from competitive devaluations and will not target our exchange rates for competitive purposes,” it added.

On Thursday, IMF Managing Director Christine Lagarde urged members to “de-escalate” trade tensions and work on fixing global trade rules. She also warned against adding currency to the trade conflict, saying this would hurt global growth as well as “innocent bystander” nations, including emerging markets that supply commodities to China. She urged.

Some of these countries, including Indonesia, the host of the IMF and World Bank meetings, are already struggling to contain capital outflows prompted by higher U.S. interests rates.

Fears that rates could spike sharply higher – and the international trade tensions – touched off a searing sell-off in global stock markets over the past week.

European Central Bank Governor Mario Draghi warned on Saturday that a “snap back” in rates and a sharp repricing of asset prices were the biggest risks to the economic outlook.

Federal Reserve Vice Chair Randal Quarles said the U.S. central bank considers the effect of its actions on emerging markets, but getting domestic monetary policy right was the Fed’s priority. 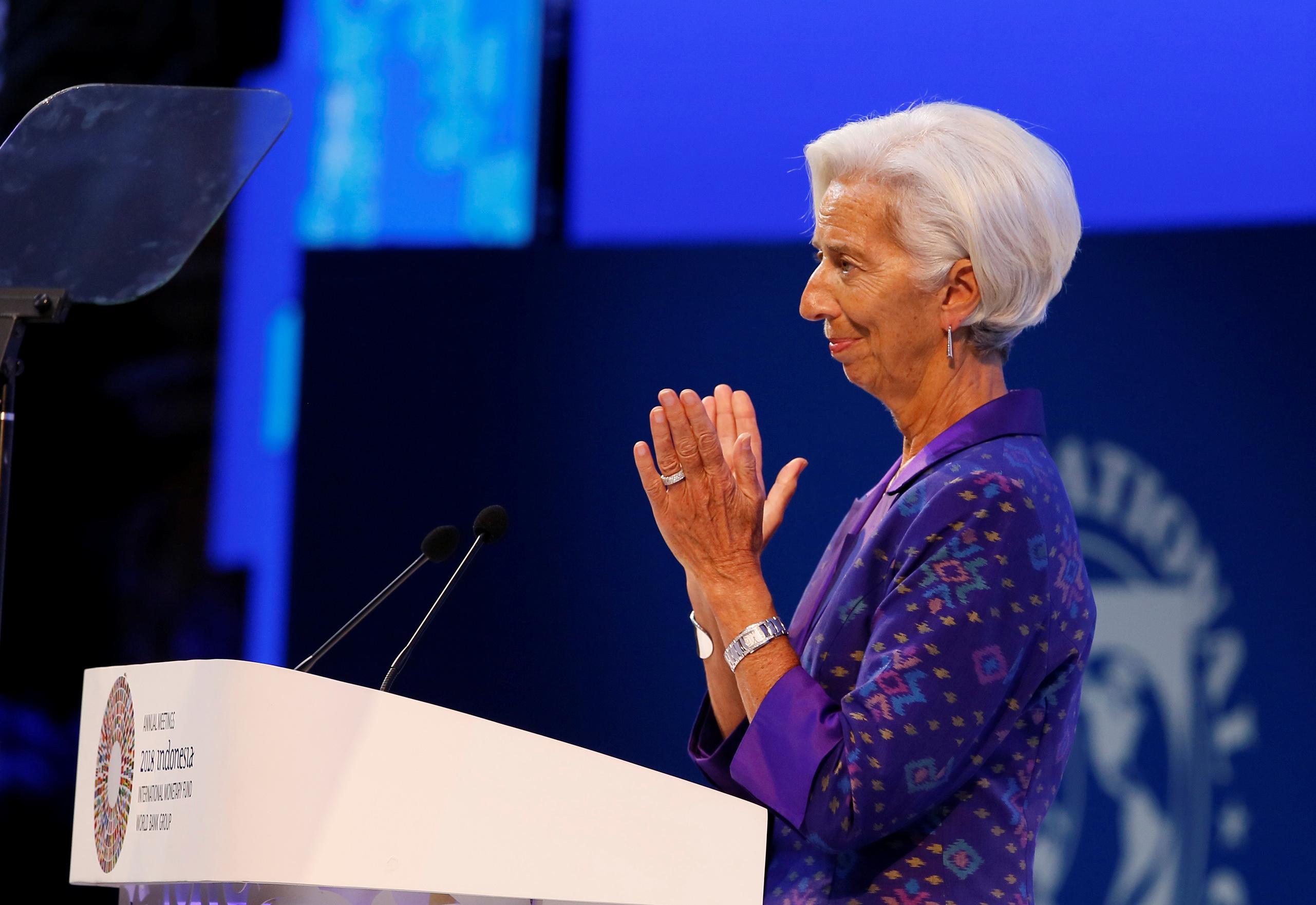 “It’s not going to be in the interest of anyone in the world … for us to get behind the curve in the U.S. by moderating what we think is the right course of domestic policy,” Quarles told a finance conference in Bali.

Blaming the Sino-U.S. trade dispute and tighter financial conditions in emerging markets, the IMF this week cut global growth forecasts for 2018 and 2019.

“The recovery is increasingly uneven, and some previously identified risks have partially materialized,” the IMFC communique said, referring to threatened tariffs and outflow pressures.

The United States and China have slapped tit-for-tat tariffs on hundreds of billions of dollars of each other’s goods over the past few months, sparked by U.S. President Donald Trump’s demands for sweeping changes to China’s intellectual property, industrial subsidy and trade policies.

Trump has frequently accused China of cheapening its currency to gain a trade advantage, claims Beijing has consistently rejected. The U.S. Treasury is due to release a key report on currency manipulation next week.

Despite reassurances from China’s central bank on currency policy, some analysts say yuan weakness will persist, as there is no clear path towards resolving the U.S.-China trade dispute and higher tariff rates loom in January.

“Clients in China remain unwilling to call a bottom in the yuan,” NatWest Markets head of foreign exchange strategy Mansoor Mohi-uddin said in a research note. “This in turn makes us cautious about calling for a peak in the dollar globally.”

But Bank of Japan Governor Haruhiko Kuroda said the Fed’s rate hikes were “basically good” for the world economy, though he was more cautious about escalating trade tensions due to their “rather unusual” scale.