WASHINGTON (Reuters) – U.S. and Canadian negotiators pushed ahead in grinding talks to rescue the North American Free Trade Agreement on Thursday, but a few stubborn issues stood in the way of a deal, including dairy quotas, protection for Canadian media companies, and how to resolve future trade disputes.

A U.S. source familiar with the discussions in Washington said it was still unclear whether the two sides could bridge the gaps or whether President Donald Trump will opt for a Mexico-only bilateral trade deal.

“We’re down to three issues: Chapter 19, the cultural issues and dairy. We’ve created leverage and driven Canada to the table,” the source said. “Part of our problem is that Canada has been backsliding on its commitments (on dairy).”

Trump has set a deadline for a deal this week, prompting aides to U.S. Trade Representative Robert Lighthizer and Canadian Foreign Minister Chrystia Freeland to work well into the evening on Thursday to find ways to move forward.

Bloomberg News cited a Canadian government official as saying that a deal was not expected to be reached this week.

“We are making good progress,” Freeland told reporters following a short meeting with Lighthizer at the USTR offices on Thursday evening.

She repeated her earlier statements that the day’s discussions were “constructive and productive” amid an atmosphere of “goodwill on both sides.”

She declined to discuss specific issues under negotiation but said talks would resume on Friday.

The Republican chairman of the U.S. House of Representatives Ways and Means Committee, Kevin Brady, a powerful voice in Congress on trade, told reporters that differences remained between the two sides over Canada’s dairy quota regime, a trade dispute resolution settlement procedure and “other longstanding issues.”

The Trump administration charges that Canada discriminates against U.S. dairy exports. It also wants to end the Chapter 19 arbitration panels for resolving disputes over anti-dumping tariffs, something Canada has used to defend its lumber exports to the United States, despite U.S. charges that Canadian lumber is unfairly subsidized.

“They are continuing to push toward a conclusion of that agreement. A lot depends on the seriousness of Canada in resolving these final disputes,” Brady told reporters after speaking with Lighthizer earlier on Thursday. “My sense is that everyone is at the table with the intention of working these last, always difficult issues out.”

The third unresolved issue is Canada’s insistence that previous NAFTA cultural exemptions protecting its publishing and media companies from being acquired by American companies be preserved. Prime Minister Justin Trudeau this week said this was important to Canada’s national sovereignty and identity.

Lighthizer has referred to the exemptions as “cultural protectionism” as Canadian companies are free to buy U.S. media outlets.

Trump has threatened to push ahead with a bilateral deal with Mexico, effectively killing the three-country NAFTA pact, which covers $1.2 trillion in trade.

FILE PHOTO: The flags of Canada, Mexico and the U.S. are seen on a lectern before a joint news conference on the closing of the seventh round of NAFTA talks in Mexico City, Mexico, March 5, 2018. REUTERS/Edgard Garrido/File Photo

The United States and Mexico reached an agreement on overhauling NAFTA at the beginning of last week, turning up the pressure on Canada to agree to new terms.

Trump said on Wednesday that he expected it to be clear whether there would be a deal to include Canada in a few days.

Canada also wants a permanent exemption from Trump’s steel and aluminum tariffs, and for Washington to eliminate the threat of U.S. auto tariffs.

But Freeland said the “Section 232” national security tariffs on metals were not part of the current NAFTA talks.

“Canada’s position on the 232 tariffs is unchanged. These tariffs are unjustified and illegal,” she said on Thursday.

Trump has claimed that the 1994 NAFTA pact has caused the loss of hundreds of thousands of U.S. jobs, something that most economists dispute.

Data released on Wednesday showed the U.S. trade deficit hit a five-month high of $50 billion. The shortfall with Canada shot up 57.6 percent.

Trump has notified Congress he intends to sign the trade deal reached last week with Mexico by the end of November, and officials said the text would be published by around Oct. 1. 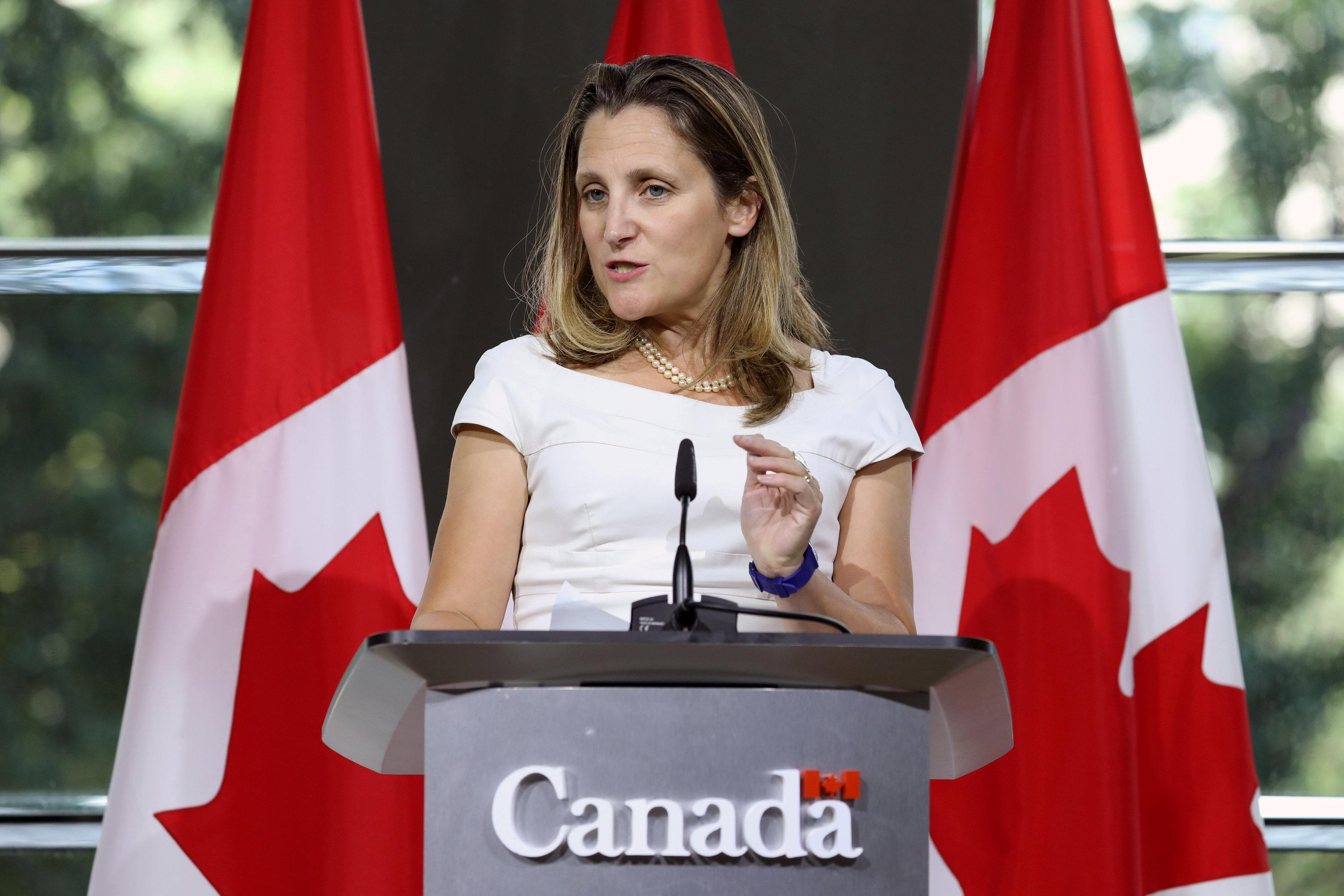 Negotiators have blown through several deadlines since the talks started in August 2017. As the process grinds on, some in Washington insist Trump cannot pull out of NAFTA without the approval of Congress.