The spat drew in Germany and France, who sharply criticized Trump’s decision to abruptly withdraw his support for a Group of Seven communique hammered out at a Canadian summit on Saturday, accusing him of destroying trust and acting inconsistently.

Freeland reiterated Canada will retaliate to U.S. tariffs in a measured and reciprocal way, adding Canada will always be willing to talk.

Trump arrived in Singapore on Sunday for the summit that could lay the groundwork for ending a nuclear stand-off between the old foes.

“(Trudeau) really kind of stabbed us in the back,” Kudlow, the director of the National Economic Council who had accompanied Trump to Canada, said on CNN’s “State of the Union.”

Trade adviser Peter Navarro told “Fox News Sunday” that “there is a special place in hell for any leader that engages in bad faith diplomacy” with Trump.

Trudeau, in Quebec City for bilateral meetings with non-G7 leaders after the summit, did not comment as he arrived.

Trudeau got direct personal support from some European leaders.

British Prime Minister Theresa May “is fully supportive” of Trudeau and his leadership, a senior UK government source said, while European Council President Donald Tusk tweeted: “There is a special place in heaven for @JustinTrudeau.”

Freeland, asked about support from allies, said: “The position of our European allies, including Japan, is the same as ours. We coordinated very closely with the European Union, with Mexico, on our list of retaliatory measures and actions.”

Europe will implement counter-measures against U.S. tariffs on steel and aluminum just like Canada, German Chancellor Angela Merkel said, voicing regret about Trump’s decision to withdraw support for the communique.

Trudeau’s office said he had not said anything in his closing G7 news conference he has not said to Trump before.

The majority of Canadian exports go to the United States, making Canada uniquely vulnerable to a U.S. trade war.

Canadian officials, including Trudeau, have fanned across America as part of a months-long charm offensive to appeal to pro-trade Republicans at every level. But even those vested in Canadian trade are not expected to come to Trudeau’s defense as long as the U.S. economy is roaring.

“I think the pushback by Congress is going to come up incredibly short,” Chris Barron, a pro-Trump Republican strategist, said of Republican efforts to rein in Trump.

Trump’s backing out of the joint communique torpedoed what appeared to be a fragile consensus on a trade dispute between Washington and its top allies.

“The G7 was a forum for friends – democracies with the same value system – to discuss issues of common interest. Now there is a question mark over that. But it did not start with this G7, but with the election of Donald Trump,” said a European official.

Trump also said he might double down on import tariffs by hitting the sensitive auto industry, throwing the G7’s efforts to show a united front into disarray.

“In a matter of seconds, you can destroy trust with 280 Twitter characters,” German Foreign Minister Heiko Maas said when asked about Trump’s U-turn.

France is also standing by the G7 communique, a French presidency official said.

Trump has infuriated the European Union, Canada and Mexico by imposing tariffs on steel and aluminum imports.

“This is of great concern to the G7. I do not know where we go from here. It is impossible to predict what Trump will do next,” said a senior G7 official on the summit outcome.

“The world as we know it, namely the U.S.-led rules-based multilateralism, is now in serious danger of unraveling, as illustrated at the G7 meeting,” said Erik Nielsen, chief economist at Unicredit Bank.

South African President Cyril Ramaphosa, who met with Trudeau on Sunday, said it was time for G20 nations to play a role and to “also bring about some good sense to all the key players.”

“The G20 helpfully has more countries that have a stake in the economy of the world, including the G7,” he told Reuters. 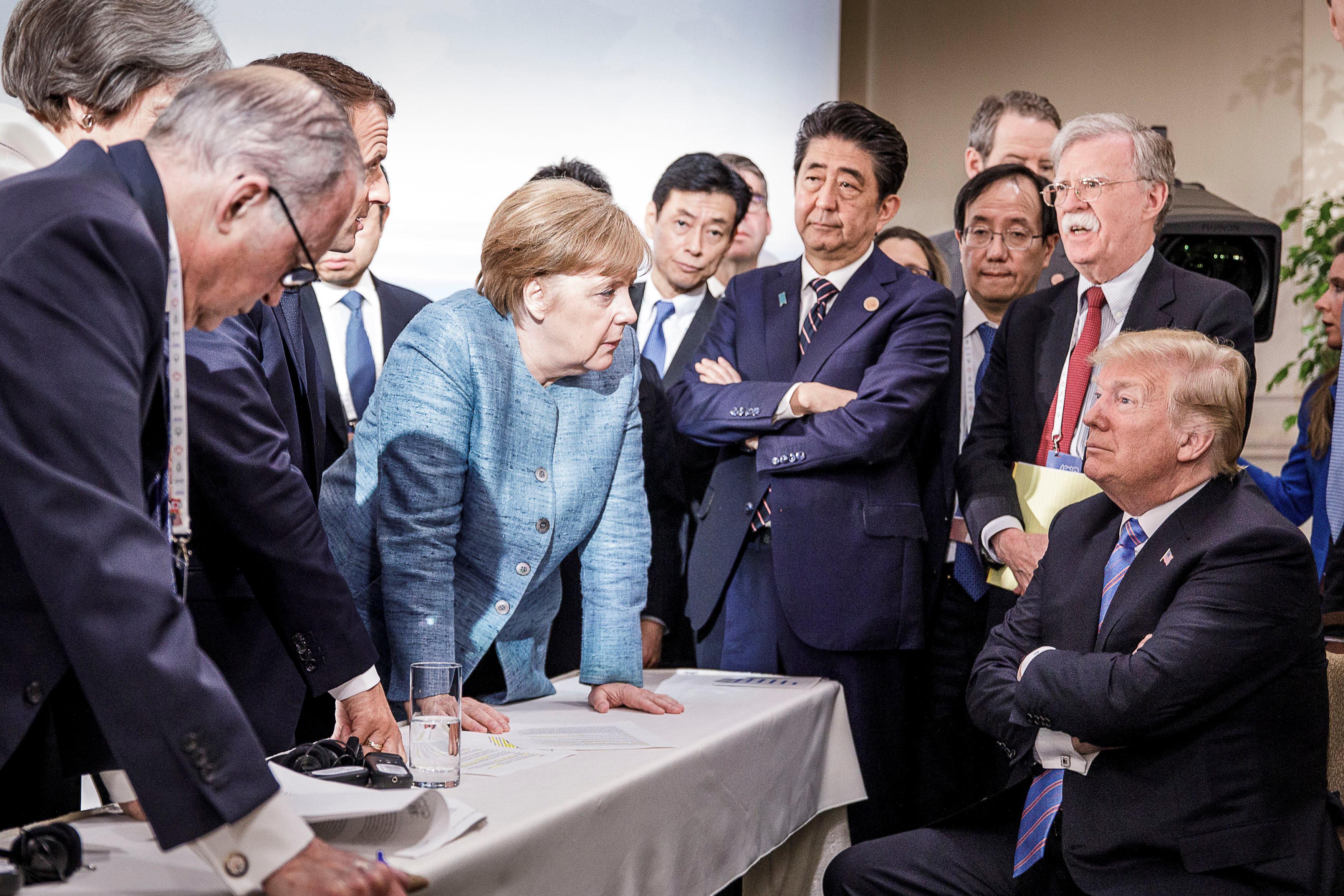 Canada’s Freeland, who met with U.S. Trade Representative Robert Lighthizer on Friday, said she would speak to him later on Sunday, adding that she believes a deal to renew the North American Free Trade Agreement is still possible.