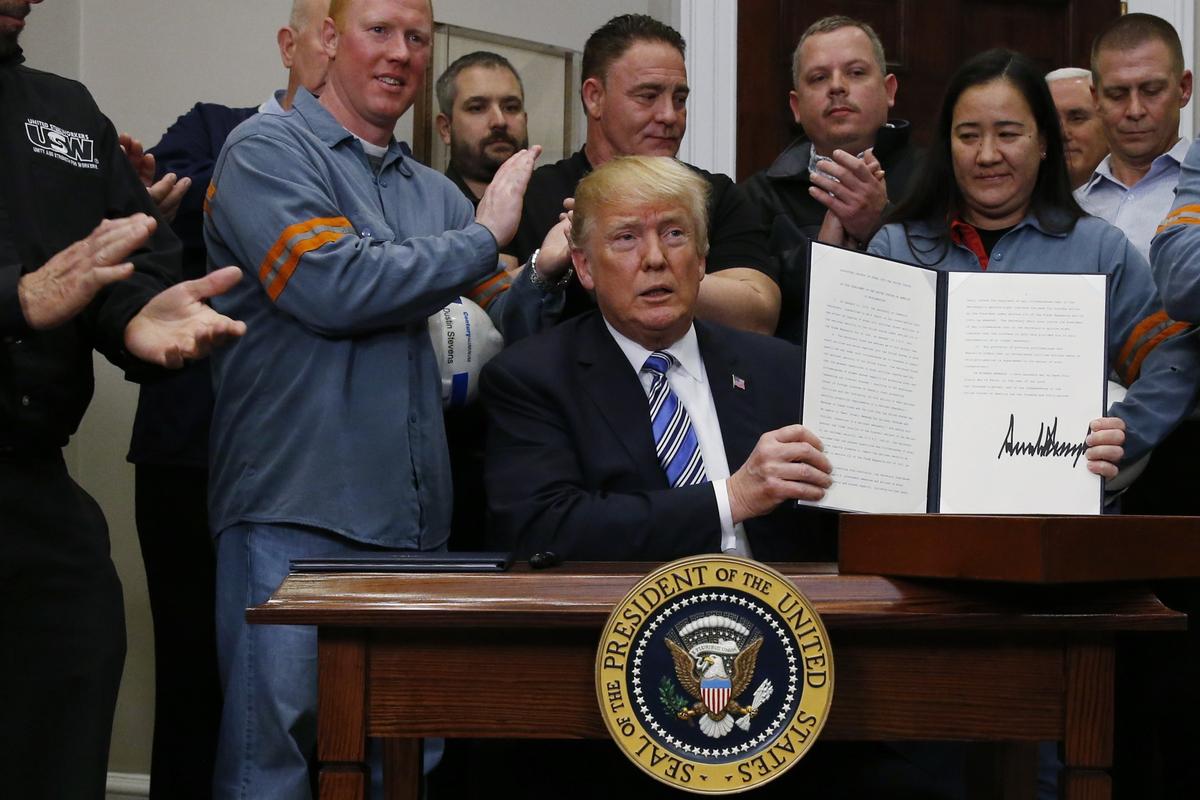 BRUSSELS/SHANGHAI/TOKYO (Reuters) – From Japan and South Korea to Australia and Europe, officials lined up on Friday to seek exemptions from President Donald Trump’s tariffs on U.S. steel and aluminum imports, while Chinese producers called on Beijing to retaliate in kind.

Tokyo and Brussels rejected any suggestion that their exports to the United States threatened its national security – Trump’s justification for imposing the tariffs despite warnings at home and abroad that they could provoke a global trade war.

Trump signed an order for the 25 percent tariffs on steel imports and 10 percent for aluminum at the White House on Thursday to counter cheap imports, especially from China, which he described as “an assault on our country”.

However, he said “real friends” of the United States could win waivers from the measures, which come into force after 15 days. In the event he exempted Canada and Mexico, fellow members of the North American Free Trade Agreement (NAFTA) which he is trying to renegotiate.

Brazil, which after Canada is the biggest steel supplier to the U.S. market, said it wanted to join the list. “We will work to exclude Brazil from this measure,” Acting Trade Minister Marcos Jorge told Reuters after meeting U.S. Commerce Secretary Wilbur Ross. Argentina made a similar case.

With Japan a major trade partner and international investor, Suga said that, on the contrary, they contributed greatly to employment and industry in the United States. Japan’s steel industry body also expressed concern.

The European Union, the world’s biggest trade bloc, chimed in. “Europe is certainly not a threat to American internal security so we expect to be excluded,” European trade Commissioner Cecilia Malmstrom said in Brussels.

Malmstrom told reporters the EU was ready to complain to the World Trade Organization, and retaliate within 90 days. She will meet U.S. Trade Representative Robert Lighthizer and Japanese Trade Minister Hiroshige Seko in Brussels on Saturday when she will ask whether the EU is to be included in the tariffs.

Other officials at the EU, by far the biggest trading partner of the United States by value, have warned it could take counter-measures including European tariffs on U.S. oranges, tobacco and bourbon.

Some products under consideration are largely produced in constituencies controlled by Trump’s Republican Party. Brussels has reminded Trump that tit-for-tat trade measures deepened the Great Depression in the 1930s and in the 2000s cost thousands of U.S. jobs when Washington imposed tariffs on European steel.

U.S. President Donald Trump holds up a proclamation during a White House ceremony to establish tariffs on imports of steel and aluminum at the White House in Washington, U.S., March 8, 2018. REUTERS/Leah Millis

European industry associations called on Malmstrom to react to the tariffs. “The loss of exports to the U.S., combined with an expected massive import surge in the EU, could cost tens of thousands of jobs in the EU steel industry and related sectors,” said Axel Eggert, head of steel association EUROFER.

In Sydney, Prime Minister Malcolm Turnbull cited Washington’s strong relationship with Australia, adding: “There is no case for imposing tariffs on Australian steel.”

Trade tensions between Washington and Beijing have risen since Trump took office last year. China accounts for only a small fraction of U.S. steel imports, but its rapid rise to produce half the world’s steel has helped create a global glut that has driven down prices.

Beijing vowed to “firmly defend its legitimate rights and interests”. The tariffs would “seriously impact the normal order of international trade,” the Ministry of Commerce said.

China’s steel and metals associations urged the government to retaliate, citing imports from the United States ranging from stainless steel to coal, agricultural products and electronics. It was the most explicit threat yet from the country in the escalating trade row.

The dispute has fueled concerns that soybeans, the United States’ most valuable export to China, might be caught up in the row after Beijing launched a probe into imports of U.S. sorghum, a grain used in animal feed and liquor.

Within minutes of Trump’s announcement, U.S. Republican Senator Jeff Flake, a critic of the president, said he would introduce a bill to nullify the tariffs. But that would probably require Congress to muster an extremely difficult two-thirds majority to override a Trump veto.

Some Democrats praised the move. Senator Joe Manchin of West Virginia said it was “past time to defend our interests, our security and our workers in the global economy”.

South Korea, the third largest steel exporter to the United States and a strategic ally on the Korean peninsula, called for calm. “We should prevent a trade war situation from excessive protectionism, in which the entire world harms each other,” Trade Minister Paik Un-gyu told a meeting with steelmakers.

(GRAPHIC: How would Trump’s tariff affect the cost of the Boeing 737? – tmsnrt.rs/2oPA3Xf)