ISTANBUL (Reuters) – Turkey’s battered lira weakened 3 percent on Friday after a Turkish court rejected an American pastor’s appeal for release, drawing a stiff rebuke from President Donald Trump, who said the United States would not take the detention “sitting down”.

The case of Andrew Brunson, an evangelical Christian missionary from North Carolina who has lived in Turkey for two decades, has become a flashpoint between Washington and Ankara and accelerated a widening currency crisis.

The lira TRYTOM=D3 has lost nearly 40 percent of its value against the dollar this year as investors fret about President Tayyip Erdogan’s influence over monetary policy.

Heavy selling in recent weeks has spread to other emerging market currencies and global stocks and deepened concerns about the economy, particularly Turkey’s dependence on energy imports and whether foreign-currency debt poses a risk to banks.

“They should have given him back a long time ago, and Turkey has in my opinion acted very, very badly,” Trump told reporters at the White House, referring to Brunson. “So, we haven’t seen the last of that. We are not going to take it sitting down. They can’t take our people.”

Trump’s comments came after a court in Izmir province rejected an appeal to release Brunson from house arrest, saying evidence was still being collected and the pastor posed a flight risk, according to a copy of the court ruling seen by Reuters.

Brunson is being held on terrorism charges, which he denies. Trump, who counts evangelical Christians among his core supporters, has increasingly championed the pastor’s case.

It was not immediately clear what additional measures, if any, Trump could be considering. U.S. Treasury Secretary Steven Mnuchin told Trump on Thursday that more sanctions were ready if Brunson were not freed.

The United States and Turkey have imposed tit-for-tat tariffs in an escalating attempt by Trump to induce Erdogan into giving up the pastor. Erdogan has cast the tariffs, and the lira’s sell-off, as an “economic war” against Turkey.

The lira last traded at 6.0100 to the dollar at 2159 GMT, 3 percent weaker after tumbling as much as 7 percent earlier. Turkey’s dollar bonds fell, while the cost of insuring exposure to Turkish debt rose.

As the row deepens, Turkey has sought to improve strained ties with European allies. In a telephone call on Friday, Finance Minister Berat Albayrak and his French counterpart Bruno Le Maire discussed U.S. sanctions against Turkey and cooperation between their countries, Albayrak’s ministry said.

“Diplomatic negotiations hit speed-bumps and that’s not unusual in these kinds of situations,” said Jay Sekulow, a personal attorney for Trump who is also representing Brunson’s family. “We remain hopeful there will be a prompt resolution. Having said that, we fully support the president’s approach.”

Whatever action the United States takes looks likely to cause more pain for Turkish assets.

“There has been no improvement in relations with the U.S. and additional sanctions may be on the horizon,” said William Jackson of Capital Economics in a note to clients, adding that the lira could see a downward trend in 2019 and beyond.

Turkey’s banking watchdog has taken steps to stabilize the currency, limiting futures transactions for offshore investors and lowering limits on swap transactions. On Friday, it further broadened those caps.

But some economists have called for more decisive moves.

Turkey and its firms face repayments of nearly $3.8 billion on foreign currency bonds in October, Societe Generale has calculated. It estimates Turkey’s short-term external debt at $180 billion and total external debt at $460 billion – the highest in emerging markets.

Companies that for years have borrowed abroad at low interest rates have seen their cost of servicing foreign debt rise by a quarter in lira terms in two months.

After each downgrading Turkey by one notch, S&P said it expected a recession next year while Moody’s said a weakening of Turkey’s public institutions had made policymaking less predictable.

Fitch Ratings had earlier said the absence of an orthodox monetary policy response to the lira’s fall, and the rhetoric of Turkish authorities, had “increased the difficulty of restoring economic stability and sustainability”.

Albayrak, Erdogan’s son-in-law, told investors on Thursday that Turkey would emerge stronger from the currency crisis, insisting its banks were healthy and signaling it could ride out the dispute with Washington.

Economists gave Albayrak’s presentation a qualified welcome and the lira initially found some support, helped by Qatar’s pledge to invest $15 billion in Turkey.

Deep concerns remain about the potential for damage to the economy, however. Turkey is dependent on imports, priced in hard currency, for almost all of its energy needs. 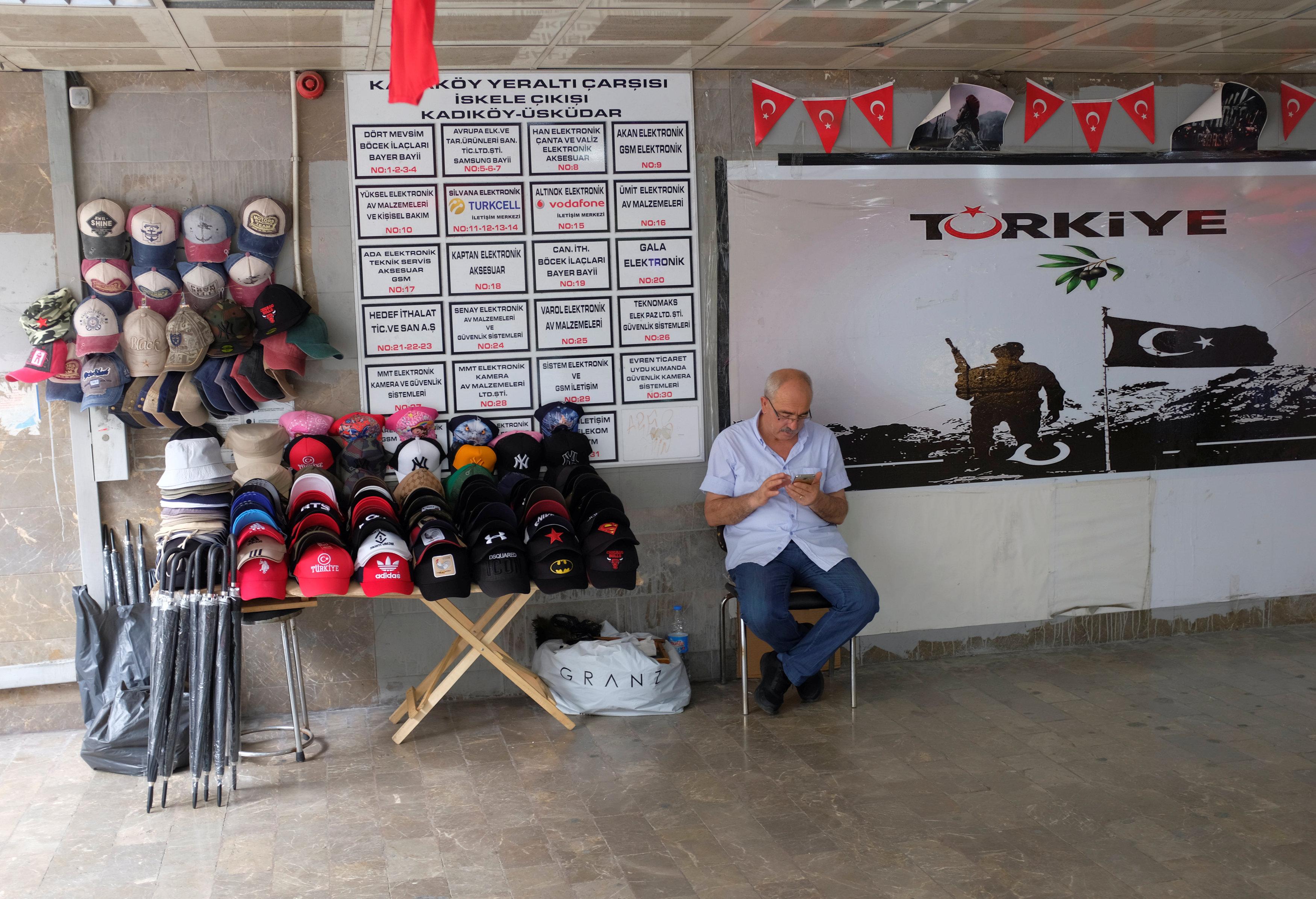 Erdogan has remained defiant, urging Turks to sell their gold and dollars for lira. But foreign currency deposits held by local investors rose to $159.9 billion in the week to Aug. 10, from $158.6 billion a week earlier, central bank data showed.

Turkish markets will be closed from midday on Monday for the rest of the week for the Muslim Eid al-Adha festival.