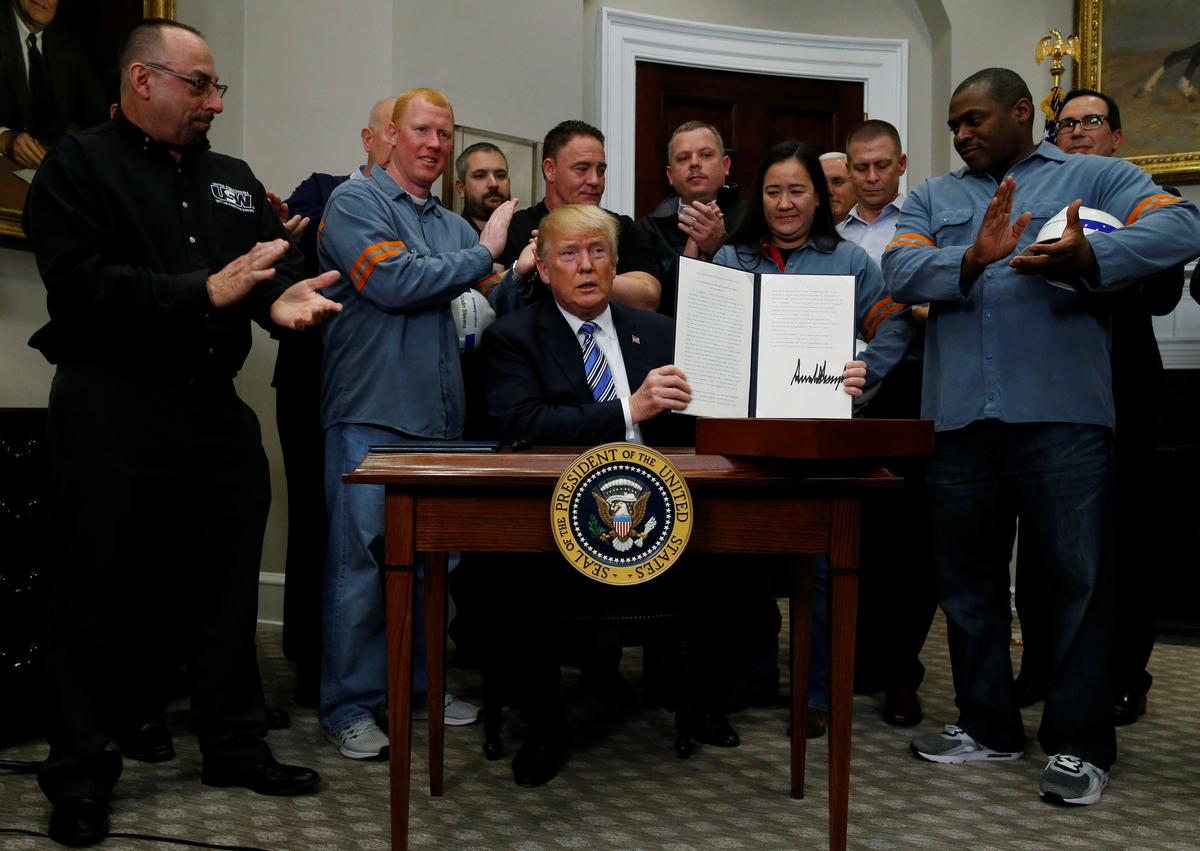 U.S. President Donald Trump is after signing a proclamation to establish tariffs on imports of steel and aluminum at the White House in Washington, U.S., March 8, 2018. REUTERS/Leah Millis

The following sets out how Washington might try to justify the tariffs at the World Trade Organization, which is supposed to police agreed free trade rules, and how the WTO might address the issue.

NO WORD TO THE WTO

The tariffs announced by Trump, which have not been officially notified to the World Trade Organization, put a tax on steel and aluminum coming into the United States from all over the world.

Even though the United States has declined to declare the tariffs at the WTO, they can still come under its jurisdiction if countries affected raise complaints.

Although Trump has said some countries such as Canada and Mexico will get exemptions, the tariffs threaten to leave the rest of the world facing oversupply of steel and aluminum.

Trump has justified the tariffs by invoking a “national security” clause under Section 232 of the 1962 U.S. Trade Expansion Act, the first time it has been used since the WTO was created in 1995.

The WTO’s General Agreement on Tariffs and Trade does allow an exemption from its rules for national security reasons.

However, national security has never been used as a defense in a WTO dispute, although it is expected to arise in a current row between Qatar and the United Arab Emirates.

Trade lawyers talk about national security as the “nuclear option” or a “systemic risk” — because if it becomes normal practice, WTO discipline will break down and no country will be bound by the international trade rules.

CAN YOU BEAT “NATIONAL SECURITY”?

In a WTO meeting on the Qatar case last year, a U.S. diplomat said that if national security was invoked, the WTO dispute settlement process was effectively over, and the parties should settle the issue elsewhere, or use the “good offices” of the WTO director general or another third party to help resolve it.

That appears to be how Washington expects to deal with any WTO challenge to its tariffs, but lawyers see gaps in the U.S. case, partly because of Trump’s seemingly arbitrary exemptions.

In addition, while the administration has said it needs domestic supply for tanks and warships, much of the taxed steel and aluminum has no military purpose. The U.S. Department of Defense itself advocated only specifically targeted steel tariffs, and delaying aluminum duties altogether.

Cato Institute trade policy analyst Simon Lester found the original 1947 GATT drafting transcript in which the United States warned against trade policies “which really have a commercial purpose … under the guise of security”.

WHAT KIND OF TARIFFS ARE THEY?

Many trade experts say the U.S. tariffs appear to fall into the category of “safeguards” – a kind of emergency protection that is allowed if a sudden, unforeseen and damaging import surge threatens seriously to damage a particular industry.

Whether or not they are safeguards is not up to Trump. WTO judges have previously ruled that the country imposing a particular trade policy cannot decide which area of the WTO rules the policy should be governed by. It depends on the “content and substance” of the policy itself.

WHY DOES IT MATTER?

If they are safeguards, Trump’s tariffs may not be covered by the national security exemption, which applies to the WTO’s GATT rules but not explicitly its safeguards agreement.

Luckily for Trump, the checks and balances on safeguard tariffs are weak, allowing a country to demand compensation only after three years. However, that three-year wait only applies if the tariffs meet the standards of the WTO safeguard agreement – and Trump’s critics say his tariffs do not.

If they are right, a country unfairly affected by the tariffs can retaliate immediately, imposing trade sanctions to balance out the damage done by the safeguards. And there is no provision for “national security” claims to stop them.

However, retaliatory measures could quickly turn into a tit-for-tat trade battle, undermining the rules-based system that has governed global trade for almost a quarter of a century.