SEDALIA, Missouri (Reuters) – Nucor Corp, America’s largest steelmaker, planned a new plant in Sedalia, Missouri, long before U.S. President Donald Trump imposed tariffs to protect the industry – and it does not need them to make money.

Although the firm helped lead the lobbying push for tariffs on imports, executives say they invested in Sedalia and two other sites to capitalize on an already profitable strategy that doesn’t depend on government help.

While Trump has played up the narrative of downtrodden steel workers losing jobs to unscrupulous foreign competitors, most of the benefit from his 25 percent tariffs are flowing to the already strong bottom lines of Nucor and other modernized and globally competitive U.S. steel firms, according to interviews with industry executives, experts and a Reuters review of company earnings.

Even if tariffs prompt such firms to expand, they are not likely to add large numbers of factory jobs because they have stayed competitive by slashing the amount of labor required to make steel.

(For a graphic on steel industry efficiency and job loss, see: tmsnrt.rs/2PLloLb )

The Commerce Department said in a statement to Reuters that tariffs will help the Sedalia plant and 12 other steel projects create about 3,405 jobs. That’s a 2.4 percent gain industrywide, according to the American Iron and Steel Institute.

About 1,400 of those jobs at six projects, including the three Nucor sites, were planned before tariffs or do not rely on them, according to some of the firms and a Reuters review of company documents. In addition, two other projects by Republic Steel, which would create 690 jobs by restarting previously idled operations, are not certain to go forward, the company said.

A Commerce Department spokesman did not comment on whether all the projects on the administration’s list depended on tariffs but pointed out that steel imports have declined recently and domestic production has increased. The department said broad tariffs on imports were needed because of rampant “chicanery” by foreign producers who evaded existing countervailing and anti-dumping duties, which are applied narrowly to specific products.

Trump’s tariffs may prove pivotal in extending the life of older, less efficient plants such as U.S. Steel’s Granite City plant near St. Louis, where the president held an event in July to tout tariffs. The company credits tariffs for its decision to add 800 jobs by restarting two blast furnaces it had idled in 2015. A total of 1,500 workers will now work in a factory where sparks fly and molten steel is still poured from giant ladles in a labor-intensive, multi-step process.

At Nucor’s plant in Sedalia, by contrast, 225 people will make steel with a high-tech furnace that shoots electricity through scrap metal to melt it into new products. That technology is now used to produce nearly 70 percent of U.S. steel – with a third less labor and energy, according to Charles Bradford, president of Bradford Research Inc.

Nucor CEO John Ferriola testified in Washington last year that tariffs would encourage steel-sector investment, but he emphasized in a statement to Reuters that the company’s own capital projects are “designed to be competitive even without tariffs.”

Although Nucor’s expansions don’t depend on protectionist policy, a company spokesperson said, tariffs make such investments easier by limiting the dumping of artificially low-priced steel on the U.S. market.

Nucor announced last month that it had nearly tripled its third-quarter profits, to $676.66 million, compared to a year ago. Earnings for steel companies in the S&P’s steel index soared more than 75 percent in the first half of 2018 and are expected to jump 166 percent in the second half, according to I/B/E/S data from Refinitiv.

Nucor has led the way in slashing labor costs with modern factories, a trend driving industry job loss as the hours of labor needed to produce a ton of steel has been cut from nearly 10 to two since 1980, according to the American Iron and Steel Institute.

Nucor selected Sedalia because of its location on a main rail line, near ample scrap metal sources and major construction markets needing the plant’s steel rebar.

Although the plant will create few jobs compared to steel factories of the past, the positions – with salaries averaging $65,000 – are highly coveted in Sedalia, where home values average $86,000 and 15 percent of adults have a college degree, according to U.S. census data.

The desirability of the jobs underscores a political dynamic often lost in the debate over Trump’s trade policy. In places like Sedalia, where 70 percent of residents of the surrounding county voted for Trump, steel jobs are prized over other blue-collar work.

Sedalia assigned a team of 10 people to court Nucor for a year, and the state provided tax incentives that could total nearly $27.3 million over 15 years. Local economic development director Jessica Craig called the jobs “transformative.”

Nucor gets a warm reception in Washington, too, where it’s the biggest spender on lobbying among steel firms, laying out $1.25 million so far this year, down from a peak of $2.71 million in 2015, according to Nucor disclosures compiled by the Center for Responsive Politics.

Nucor’s political spending, which also includes millions of dollars in donations to political candidates, started under former CEO Dan DiMicco, who started in 2000 and stepped down in 2012. DiMicco went on to advise Trump on manufacturing during the presidential transition and is now a member of his Advisory Committee for Trade Policy Negotiations, a key venue for business leaders to influence U.S. trade negotiators.

Nucor also gave $1 million to a San Diego nonprofit in 2011, which was used by Peter Navarro – now a top Trump trade adviser – to make a film called “Death by China.” At one point, the film depicts a knife emblazoned with “made in China” plunging into an American flag as a voice-over intones: “China is the only major nation in the world that is preparing to kill Americans.”

“My customers came to me and said, ‘China is killing us’,” he said in an interview, “so this turned into something much larger than the steel industry … You may have to put tariffs on every product from China to change their behavior.”

As they raise alarms about unfair competition, however, Nucor executives take pride in the company’s performance despite such headwinds. Nucor has been profitable since 1968 in every year but one – 2009, amid a global financial crisis.

Nucor has also sought to block other companies’ efforts to win exemptions from the tariffs through a Commerce Department process that awards them in cases where, for instance, a company can’t find the type of steel it needs domestically. Nucor said it filed objections to about 10 percent of the more than 42,000 steel exemption requests received as of October 22.

They included those from companies such as NLMK Pennsylvania LLC, which sought exemptions for imported slabs it uses to make steel coils.

“They don’t even make the kind of slabs we use,” CEO Bob Miller said of Nucor, who he believes wants to compete with him in selling coils. “It’s totally anti-competitive.”

The tariffs are boosting capacity of the slabs NLMK needs, Nucor said in a statement, so there should be “plenty of slabs available domestically.”

Tariff critics argue that rising profits for the steel industry come at the expense of its customers and their workers. Higher prices mean steel users – companies making everything from tractors to skyscrapers – could cut 16 jobs for every one added in steel manufacturing, according to the Trade Partnership Worldwide LLC, a pro-trade economic forecasting and consulting firm in Washington.

“What you see six months into the steel tariffs is that the manufacturing economy is strong,” says Scott Paul, president of the Alliance for American Manufacturing.

Steel consumers say their cutbacks will come over time, as higher steel prices erode their competitiveness. 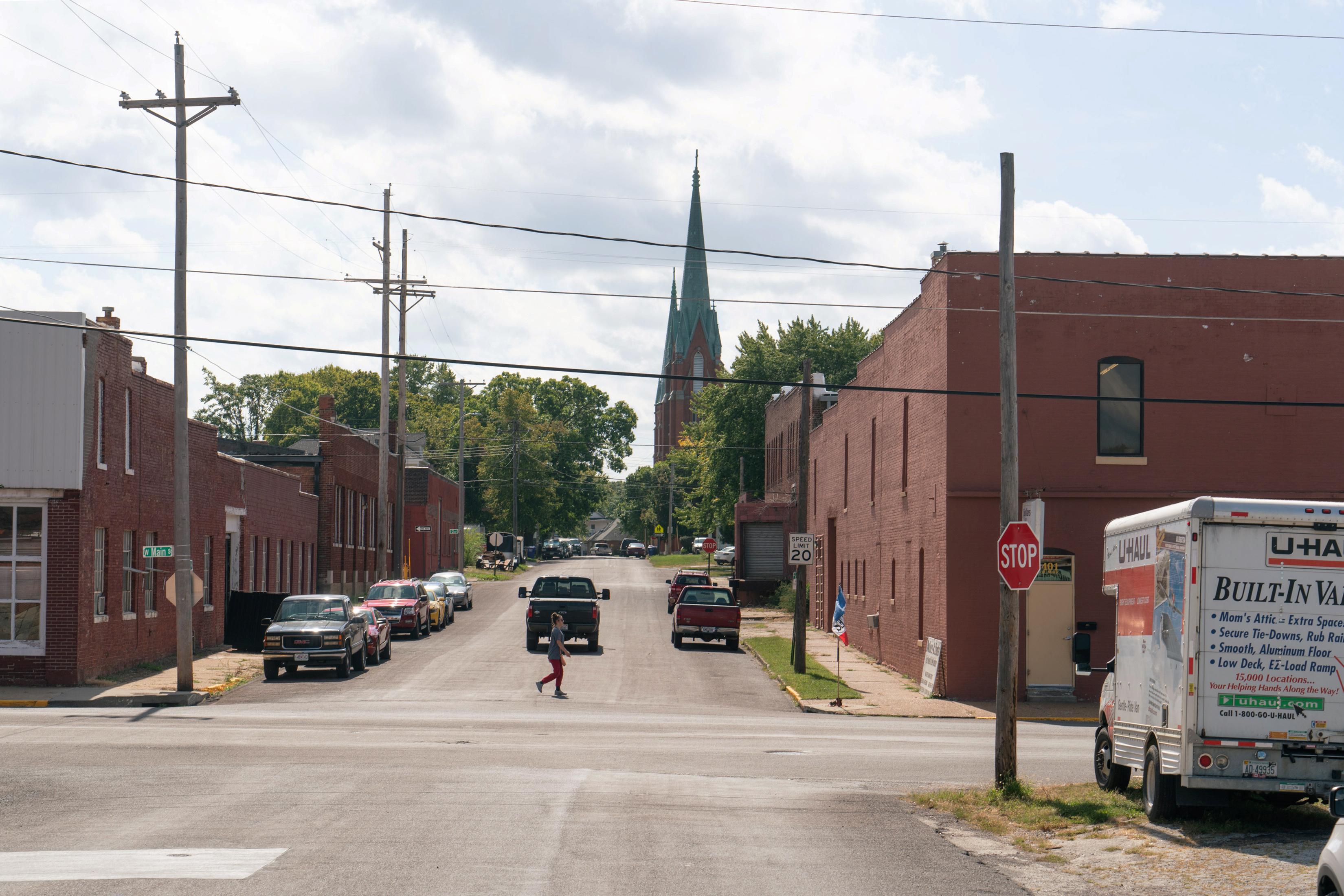 The impact reaches far beyond auto factories to anyone who uses steel. Joe Pecoraro, a project executive at Skender Construction, a Chicago builder, said the tariffs caused him to delay two projects that would have produced at least 130 construction jobs.

“The cost of everything made of steel,” he said, “has gone through the roof this year.”