LA MALBAIE, Quebec (Reuters) – U.S. President Donald Trump on Saturday threw the G7’s efforts to show a united front into disarray after he became angry with Canadian Prime Minister Justin Trudeau, and said he might double down on import tariffs by hitting the sensitive auto industry.

Trump’s bombshell announcement that he was backing out of the Group of Seven communique, made after he left the summit in Canada early, torpedoed what appeared to be a fragile consensus on the trade dispute between Washington and its top allies.

“PM Justin Trudeau of Canada acted so meek and mild during our @G7 meetings only to give a news conference after I left saying that, ‘US Tariffs were kind of insulting’ and he ‘will not be pushed around.’ Very dishonest & weak. Our Tariffs are in response to his of 270% on dairy!” the U.S. president tweeted.

In his press conference, Trudeau had spoken of retaliatory measures that Canada would take next month in response to Trump’s decision to slap tariffs on steel and aluminum imports from Canada, Mexico and the European Union.

“Canadians, we’re polite, we’re reasonable but we also will not be pushed around,” Trudeau, the host of the two-day summit in La Malbaie, Quebec, told reporters.

Reacting to Trump’s tweets, Trudeau’s office said: “We are focused on everything we accomplished here at the summit. The Prime Minister said nothing he hasn’t said before – both in public, and in private conversations with the President.”

In Paris, a French presidency official said France and Europe stood by the G7 communique and anyone departing from the commitments made at the summit would be showing their “incoherence and inconsistency”.

“International cooperation cannot depend on being angry and on sound bites. Let’s be serious,” the official, speaking on condition of anonymity, told Reuters.

Trump’s salvo capped a dizzying two days of controversies that began with his suggestion Russia be readmitted to the G7, then what a French official described as a “rant” full of “recriminations” against U.S. trading partners, followed by Trump’s denial of any contention with leaders at the summit and his description of their relationship as a “10.”

By ordering his representatives to back out of the communique, Trump appeared to be asserting his oft-stated aim of upsetting the status quo whether by pulling out of the global climate accord or the international nuclear deal with Iran or threats to scrap the North American Free Trade Agreement.

The communique, which appeared to have papered over the cracks that have surfaced in the G7, said the leaders of the United States, Canada, Britain, France, Italy, Germany and Japan agreed on the need for “free, fair, and mutually beneficial trade” and the importance of fighting protectionism.

Trump’s reversal, announced while he was en route to Singapore for a meeting with North Korean leader Kim Jong Un, sent his G7 partners scrambling.

Trump’s counterparts in the G7 had sought this week to find some semblance of consensus with Washington on trade and the other key issues that have formed the basis of the 42-year-old grouping of industrialized nations.

French President Emmanuel Macron had labeled the summit a success before Trump’s Twitter posts, saying there was relief within the G7 that an escalation of the trade dispute had been avoided.

“The nature of the debate we had was rather appeasement and it stopped the escalation in terms of behavior,” Macron, who had exchanged terse Twitter messages with Trump in the run-up to the summit, told reporters.

“It allowed a dialogue, where for weeks there were uncoordinated unilateral actions and non-cooperation.”

Trump says his tariffs are meant to protect U.S. industry and workers from unfair international competition as part of his “America First” agenda.

The prospect that he could be moving toward an even greater protectionist trade policy is likely to chill financial markets worried about tit-for-tit escalation that could lead to a full-blown global trade war.

Trump has announced tariffs of up to $150 billion on Chinese goods over U.S. complaints of Beijing’s trade practices and its alleged theft of U.S. technology. China has vowed to retaliate in equal measure.

Canada, Mexico and the EU also are moving ahead with their own levies on U.S. goods.

But tariffs on U.S. imports of cars and auto parts would devastate the Canadian auto industry, which is highly integrated with the U.S. sector. They could also damage Japan and Germany.

The Trump administration announced two weeks ago that it would investigate whether auto imports hurt U.S. national security, the first step toward tariffs similar to the ones he imposed on steel and aluminum imports last week.

Earlier on Saturday, Trump told reporters it would be “very easy” to make the case for tariffs on auto imports using the rationale that they threaten national security. 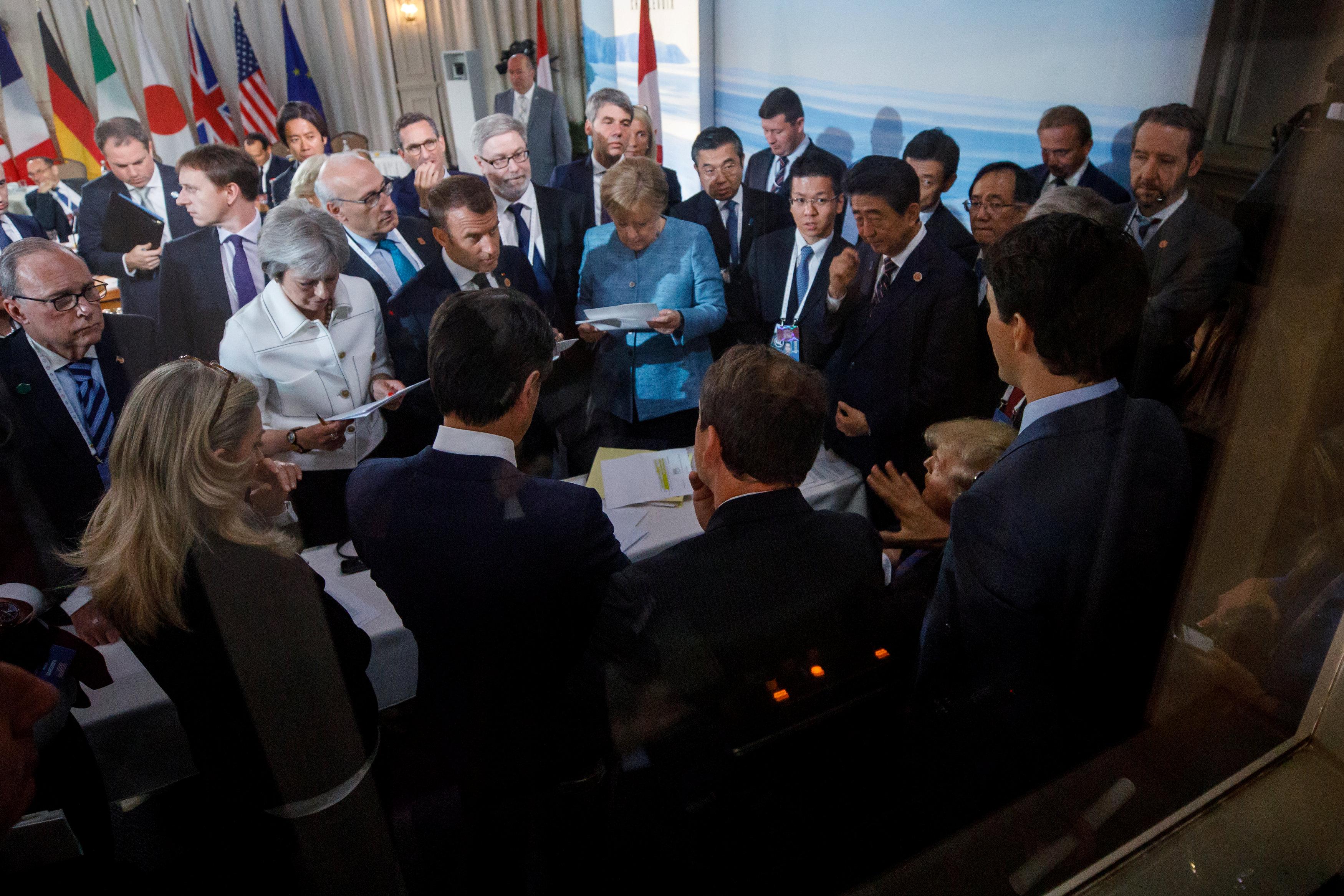 Such a move could make it nearly impossible to renegotiate the terms of the 1994 NAFTA pact between the United States, Canada and Mexico.

On Saturday, Trump repeated his desire to have a sunset clause in an updated NAFTA deal, a demand Trudeau rejected again.