LA MALBAIE, Quebec (Reuters) – U.S. President Donald Trump on Saturday accused other countries of “robbing” the United States on trade and threatened to stop doing business with them altogether as he pushed his “America First” agenda at a Group of Seven nations summit.

Trump, who angered Washington’s top allies last week when he imposed tariffs on steel and aluminum imports from Canada, the European Union and Mexico, issued a broad indictment of global trade, with swipes at the G7 and India.

“We’re like the piggy bank that everybody is robbing,” he said at a press conference before making an early exit from the two-day summit in La Malbaie, Quebec, where he met with leaders of Canada, Britain, France, Italy, Germany and Japan.

“This isn’t just G7. I mean, we have India, where some of the tariffs are 100 percent … And we charge nothing,” he said. “And it’s going to stop. Or we’ll stop trading with them.”

Trump, who repeated that his tariffs are meant to protect U.S. industry and workers from unfair international competition, said he had suggested to the other G7 leaders that all trade barriers, including tariffs and subsidies, be eliminated.

He also denied the summit had been contentious, a remark that contradicted what one G7 official described as an “extraordinary” exchange on Friday in which Trump repeated a list of trade grievances, mainly concerning the EU and Canada.

The White House did not immediately respond to requests for comment on the official’s remarks about Trump.

Trump’s counterparts in the G7 have been scrambling this week to try to find some semblance of consensus with Washington on trade and the other key issues that have formed the basis of the 42-year-old organization.

German Chancellor Angela Merkel said there was broad agreement among G7 leaders that tariffs and other trade barriers should be reduced, though she acknowledged that differences with the United States remained.

“These are jointly shared principles, although the pitfalls lie in the details,” she said in a press conference, adding that she expected a joint G7 statement on trade would be issued at the end of the summit.

French President Emmanuel Macron said the agreement would be a good first step and represented the G7 nations’ desire to stabilize the situation.

“Nevertheless, I do not consider that with a declaration all is obtained and it is obvious that we will have in the coming weeks, the next months, to continue to work,” Macron told reporters.

Canada and the EU have denounced the U.S. tariffs as illegal and unjustified and Ottawa has proposed levies on a range of U.S. goods next month while the EU has pledged its own retaliatory measures.

The spat has financial markets worried about tit-for-tit escalation that could lead to a full-blown global trade war.

Investors are also concerned about the future of the North American Free Trade Agreement, which Trump has threatened to terminate. Canada and Mexico, the other members of the 1994 pact, have been frustrated by the slow pace of talks to renegotiate NAFTA.

On Saturday, Trump repeated his desire to have a sunset clause in an updated NAFTA deal, a demand that Canadian Prime Minister Justin Trudeau has rejected.

The U.S. president left before the end of the summit and will fly to Singapore for a meeting with North Korean leader Kim Jong Un, which he described as a “mission of peace.”

Apart from trade, there also was disagreement at the summit over the G7’s position on climate change and Trump’s suggestion that Russia be re-admitted to the group. 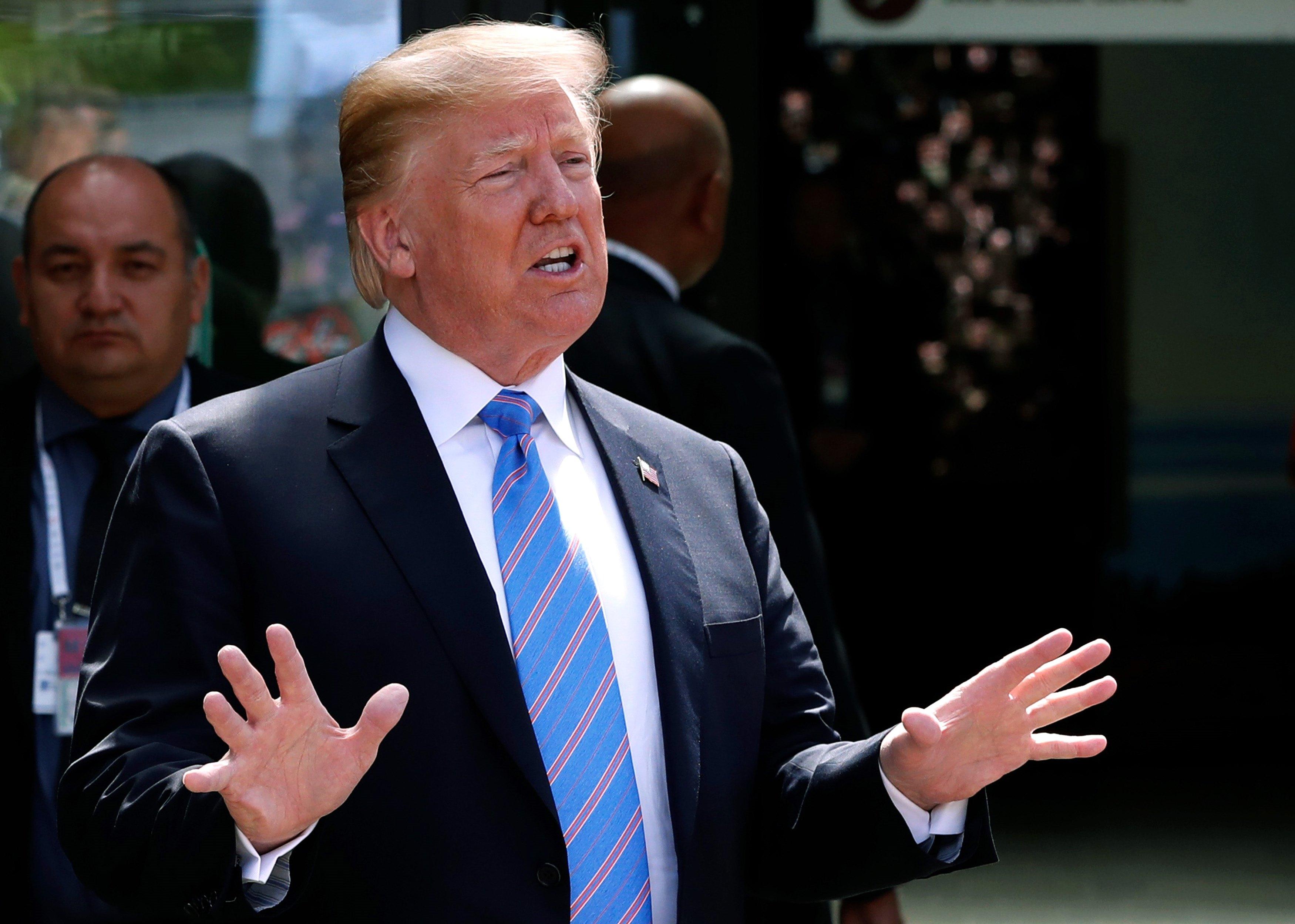 Russia was suspended in 2014 because of its annexation of Crimea from Ukraine. Merkel said on Saturday there must first be progress on a Ukraine peace plan before there is any talk about readmitting Moscow.