The lengthy list of demands was presented to Beijing prior to the start of talks Thursday and Friday between top-level Trump administration officials and their Chinese counterparts to try to sort out disputes that have threatened a damaging trade war between the world’s two largest economies.

The talks ended with China’s Xinhua news agency describing them as “constructive, candid and efficient” but with disagreements that remain “relatively big.”

The U.S. side has yet to give its account of the talks, and there was no sign that President Donald Trump would back off on his threat to impose tariffs on up to $150 billion in Chinese goods over allegations of intellectual property theft.

Speaking with reporters in Washington on Friday, Trump said he was determined to bring fairness to the U.S.-China trading relationship.

“We’re going to have some incredible trade deals announced,” Trump said, adding he had “great respect” for China’s President Xi Jinping. “That’s why we’re being so nice, because we have a great relationship.”

China during the meetings asked that the United States ease crushing sanctions on Chinese telecom equipment maker ZTE Corp, people with knowledge of the matter said.

The U.S. team demanded that China lower tariffs to levels no higher than those imposed by the United States, the people familiar with the demands said. The delegation also asked China to halt subsidies for advanced technology linked to its “Made in China 2025,” the sources said.

Chinese officials believed the U.S. proposal was “unfair,” the Wall Street Journal reported, quoting people with knowledge of the negotiations.

“I think the U.S. is asking for the impossible. Reducing the deficit by $200 billion by 2020 is quite an unrealistic demand, but it may also be a negotiation tactic to start high first,” said Tommy Xie, economist at OCBC Bank in Singapore.

In a proposal submitted by the Chinese side, Beijing offered to increase U.S. imports and lower tariffs on some goods, including cars, according to the sources.

But China requested that the United States treat Chinese investment equally under national security reviews, stop issuing any new restrictions on investments, and halt a proposal to implement 25 percent tariffs under its “Section 301” probe.

China also offered to reconsider anti-dumping duties on U.S. sorghum, according to the proposal.

Xinhua’s statement said there had been exchanges of opinion on intellectual property protections, expanding U.S. exports and bilateral services trade. It gave no indication of what actions might be taken but said the two sides committed to resolve their trade disputes through dialogue.

The state news agency said U.S. negotiators agreed to bring up the ZTE sanctions with Trump after new representations from the Chinese side. ZTE was hit last month with a seven-year ban on American companies selling components and software to it after the U.S. Commerce Department found ZTE failed to comply with an agreement to settle breached U.S. sanctions on Iran.

“My impression was that (the talks) didn’t go well given the rhetoric,” said Kevin Lai, senior economist at Daiwa Capital markets in Hong Kong. “I think the divide is still very big.”

In an editorial on its website, widely read Chinese state-run tabloid the Global Times cited people close to the talks as saying the Chinese “hit back hard” at U.S. criticism, letting them know that China won’t give in.

The United States has proposed tariffs on $50 billion of Chinese goods under its “Section 301” intellectual property probe. Those could go into effect in June following the completion of a 60-day consultation period, but activation plans have been kept vague.

China has said its own retaliatory tariffs on U.S. goods, including soybeans and aircraft, will go into effect if the U.S. duties are imposed.

Trump on Thursday praised his relationship with Chinese President Xi as the U.S delegation began their talks, which were held at a state guest house in the western part of the Chinese capital.

U.S. complaints about Chinese intellectual property abuses are at the core of the current dispute. The Trump administration says U.S. companies lose hundreds of billions of dollars annually to China’s theft of trade secrets.

Some economists noted that the deficit with China was the natural result of the large amount of manufacturing assembly of U.S. products, such as iPhones, that takes place in China. 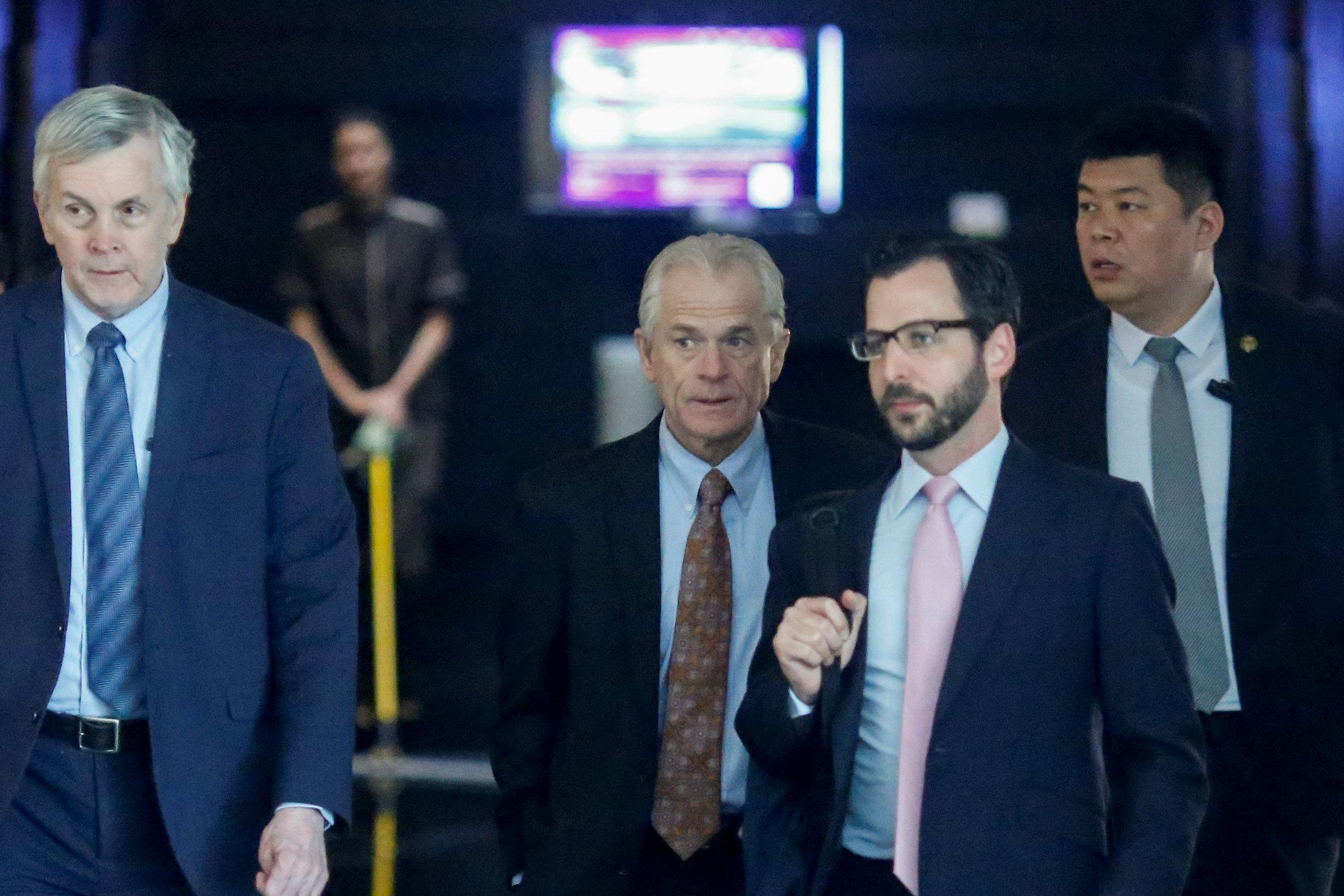 “As long as China remains the assembly hub of the world, it’s always going to have a large trade surplus with developed consumer countries like the U.S. and the E.U. and that’s not necessarily a problem,” said Julian Evans-Pritchard, senior China economist at Capital Economics.