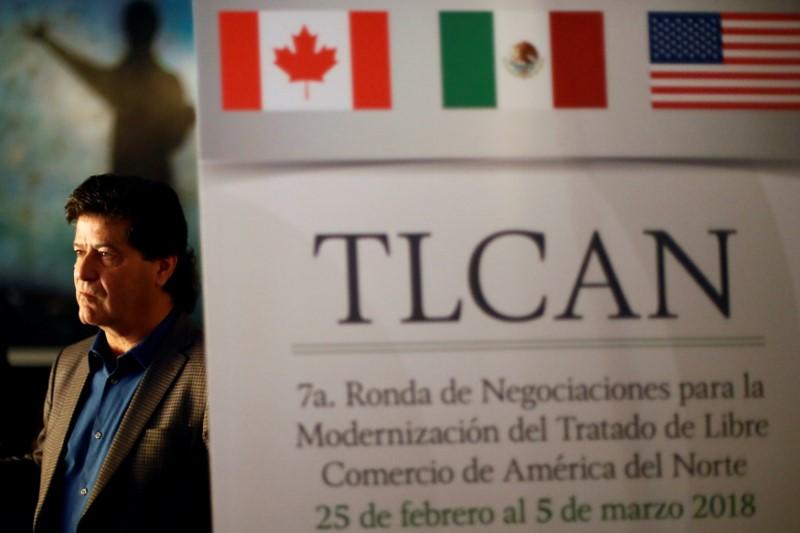 Jerry Dias, head of Canada’s private sector union Unifor, is pictured in the hotel where the seventh round of NAFTA talks takes place, in Mexico City, Mexico, March 2, 2018. REUTERS/Edgard Garrido

Trump said on Thursday that a plan for protectionist tariffs of 25 percent on steel imports and 10 percent on aluminum goods would be announced next week, following up on Twitter on Friday by calling trade wars“good, and easy to win.”

Trump’s statements have blunted efforts to renegotiate the 1990s-era North American Free Trade Agreement, which had already been disrupted by the early departure of a U.S. official handling one of the most divisive subjects, content rules for autos.

Asked how NAFTA negotiators could be working in good faith to update the deal while Trump talked approvingly about trade wars, a well-placed Canadian source replied:“That’s a very good question. I don’t think there’s an answer yet.”

“The Canadian team is absolutely furious,” Dias told Reuters, saying Canada should walk away from the talks if it did not receive an exemption. He likened the Trump administration to a schoolyard bully.

“Ultimately Canada’s going to have to start fighting fire with fire,” he told reporters.

One Mexican official familiar with the process gave a terse appraisal of how Trump’s announcement went down at the talks.

Trade officials have become used to tensions sparked by Trump, and Mexico’s chief NAFTA negotiator Kenneth Smith said the talks had not been affected by the steel announcement.

However, he said Mexico and Canada should be exempted from the measures as NAFTA allies of the United States.

It remains unclear whether the metals tariffs would apply to the United States’ partners under NAFTA, which together account for more than $1 trillion worth of annual trilateral trade.

Canada, the biggest foreign supplier of steel and aluminum to the United States, is looking at ways to impose immediate sanctions on the United States if necessary, said the Canadian source.

Mexican officials said the government would likely wait for clarity on the matter before responding, but one said earlier this week that Mexico would hit back if subject to U.S. tariffs.

Officials say a handful of less contentious NAFTA chapters could still be concluded during the latest round of talks, and three people at the talks said the technical teams remained focused on their tasks, despite the uncertainty the steel tariff plan had caused.

Negotiators from the three countries have been meeting for six months and made few concrete announcements.

Expectations of progress at the seventh round in Mexico City had already been tempered by the conviction that major problem areas were unlikely to be removed without the mediation of senior political figures.

The risk of a tariff war between the NAFTA partners threw up new roadblocks.

Mexican steel industry association Canacero said it expected the government to take“immediate reciprocal actions” if the United States slapped the tariffs on Mexico, and agricultural lobbyists at the NAFTA talks also condemned the tariff plan.

Trump has repeatedly threatened to pull out of NAFTA if the deal is not recast to his liking, arguing that it has caused an exodus of U.S. manufacturing jobs to lower-cost Mexico.