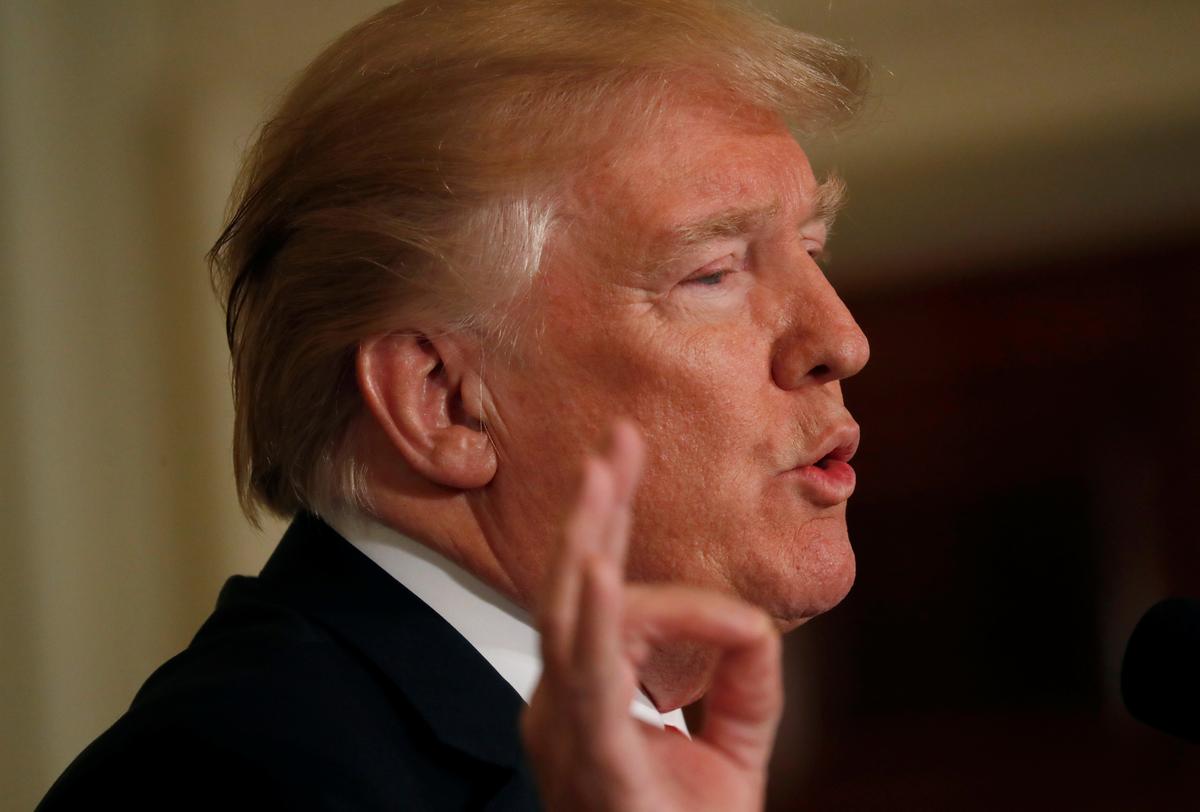 WASHINGTON/SANTIAGO (Reuters) – President Donald Trump pressed ahead with the imposition of 25 percent tariffs on steel imports and 10 percent for aluminum on Thursday but exempted Canada and Mexico, backtracking from earlier pledges of tariffs on all countries.

Describing the dumping of steel and aluminum in the United States as “an assault on our country,” Trump told a news conference that the best outcome would for companies to move here and insisted that domestic production was needed for national security reasons.

“If you don’t want to pay tax, bring your plant to the USA,” he said.

Details of the plan came from a briefing by administration officials ahead of Trump’s speech. Other countries can apply for exemptions, according to the administration, although details of when they would be granted were thin.

Trump has offered relief from steel and aluminum tariffs to countries that “treat us fairly on trade,” a gesture aimed at putting pressure on Canada and Mexico to give ground in separate talks on the North American Free Trade Agreement (NAFTA), which appear to have stalled.

Trump has also demanded concessions from the European Union, complaining that it treated American cars unfairly and has threatened to hike tariffs on auto imports from Europe.

U.S. stocks extended gains ahead of the announcement, as the Associated Press reported key details. The benchmark Standard & Poor’s 500 index was last up 0.3 percent, but the S&P composite 1500 steel index was down 2.7 percent.

U.S. Treasury bonds yields rose slightly, with the yield on the benchmark 10-year Treasury note at 2.86 percent. The Canadian dollar and Mexican peso gained against the U.S. dollar.

Mexico rejected any linkage to NAFTA in robust terms on Thursday. Mexican Economy Minister Ildefonso Guajardo told Reuters, “Under no circumstance will we be subject to any type of pressure.”

Canadian Trade Minister Francois-Phillippe Champagne told Reuters his country would not accept any duties or quotas from the United States.

Trump’s unexpected announcement of the tariffs last week roiled stock markets as it raised the prospect of an escalating global trade war. He appeared to have conceded some ground after a campaign by legislators from his own Republican party, industry groups and U.S. allies abroad.

The president said he was pleased with progress in the NAFTA talks, although he repeated that he would be willing to terminate the agreement. The talks were launched after Trump took office last year saying that if the pact was not negotiated to better serve American interests, Washington would leave.

Many observers take a dimmer view of the six-month-old talks, saying little progress has been made and the negotiations are stalled over issues such as autos. Car manufacturing’s contribution to the U.S., Mexican and Canadian economies far outweighs that of steel and aluminum production.

Several major trading partners have said they will respond to the tariffs with direct action.

“If Donald Trump puts in place the measures this evening, we have a whole arsenal at our disposal with which to respond,” European Financial Affairs Commissioner Pierre Moscovici said.

Even as Trump threatened tariffs and prodded his NAFTA partners, 11 nations gathered in Chile to sign a landmark Asia-Pacific trade pact, one that Trump withdrew from on his first day in office.

Both Guajardo and Champagne were speaking to Reuters on the sidelines of the signing ceremony in Santiago.

Trump, who won the White House after a career in real estate and reality TV, has long touted an economic nationalism, promising to bring back jobs to the United States and save the country from trade deals he views as unfair. That has put him at odds with many in his Republican Party.

Beijing, which until now had kept largely silent on the issue, sharpened its rhetoric significantly. One lever that China has is U.S. agricultural exports and it has said in the past that it could target soybeans.

“Especially given today’s globalization, choosing a trade war is a mistaken prescription. The outcome will only be harmful,” Foreign Minister Wang Yi said on the sidelines of an annual meeting of China’s parliament. “China would have to make a justified and necessary response.”

China had a record $375.2 billion goods surplus with the United States last year.

Trade tensions between the world’s two largest economies have risen since Trump took office, and although China accounts for only a small fraction of U.S. steel imports, its massive industrial expansion has helped create a global glut of steel that has driven down prices.

Most economists and trade specialists say they doubt the steel and aluminum tariffs alone would trigger a global trade war, but point to the risk of further U.S. measures against China as a major tipping point. Trump has also threatened to impose hefty tariffs on European car exports if the EU does take retaliatory measures.