CHICAGO (Reuters) – Before the U.S.-China trade war, American pig processors exported nine out of every 10 pigs’ feet and heads they shipped overseas to China and Hong Kong – for prices higher than they would fetch anywhere else.

Those parts and others that most Americans won’t eat – hearts, tongues, stomachs, entrails – have a special place in Chinese culinary culture and, consequently, in the profit margins of U.S. pork exporters.

“You often hear that the products are what keep the plants running,” said Erin Borror, economist for U.S. Meat Export Federation, a trade group.

That’s forcing U.S. processors to sell an increasing amount of such parts for pennies to be rendered into food for pets and livestock.

U.S. shipments of byproducts affected by the duties fell by about a third in April and May combined, after China imposed the first 25 percent tariff on American pork in April, according to the latest data from the U.S. Department of Agriculture.

On July 6, Beijing implemented an additional 25 percent duty as the world’s two largest economies slapped tariffs on $34 billion worth of each others’ goods.

The USDA declined to comment on the drop in offal exports.

Exporting pig offal to China has been a money-maker because consumers there enjoy its strong flavor. Stewed pigs’ feet with white beans, for instance, is a famous dish from Sichuan province, one of the country’s culinary capitals.

At least one product exported to China has almost zero value anywhere else: hind pigs’ feet. Rear feet are nearly impossible to sell elsewhere because they have holes in them from where hogs are hung upside down in packing houses, which turns off consumers in other countries, said Dermot Hayes, an agricultural economist at Iowa State University.

“They go from zero value outside of China to a significant value when the Chinese market is fully open,” Hayes said.

An expansion of its domestic hog industry had already made buyers less dependent on American pork before the trade tensions. 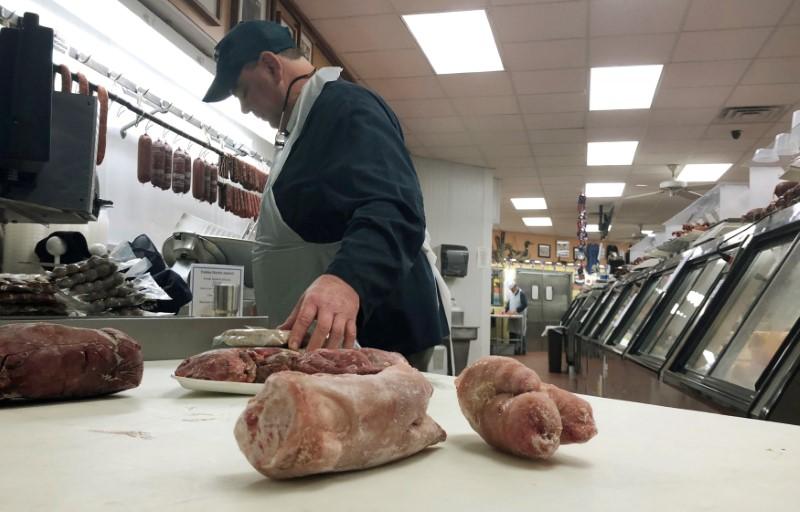 Chinese buyers could also import more from Europe, where hog prices have been trading at their lowest levels in at least two years, analysts said.

“The Chinese aren’t going to get hurt by this,” said Ken Maschhoff, chairman of The Maschhoffs, the largest family-owned U.S. pork producer. “Chile or Europe or somebody else is going to say, ‘Well, we’ve got a bunch of stomachs or livers or feet that we’re not using…’”

The slowdown hurts major processors in the United States, such as WH Group Ltd’s (0288.HK) Smithfield Foods Inc; Seaboard Foods, a division of Seaboard Corp (SEB.A); and the JBS USA unit of Brazil’s JBS SA (JBSS3.SA). Such companies benefited from record total U.S. offal sales of more than $1.1 billion in 2017.

Smithfield, the biggest U.S. pork processor and exporter to China, declined to comment. The company, owned by China-based WH Group, sells offal, jowls and lard, according to its website.

Meat processor Tyson Foods Inc (TSN.N) also declined to comment. Seaboard and JBS did not respond to requests for comment.

Margins for U.S. pork processors are under pressure due to the impact of the trade fight and last month slipped to their lowest level in three years.

WH Group’s stock price has tumbled 28 percent so far this year. Tyson shares are down 19 percent and Seaboard shares have dropped 13 percent.

The average value of U.S. offal exports to China was about 76 cents per pound in 2017, according to the U.S. Meat Export Federation.

If packers do not sell them elsewhere for human consumption, the byproducts will be rendered in the United States for about 18 cents per pound – a decrease equating to a loss of $1.55 per hog for the volume exported to China, the federation said.

Overall, it estimated lower offal prices could translate into losses of $860 million for the U.S. pork industry over the next year. Processors will try to pass on losses to farmers by paying less for live hogs, Hayes said.

“It is the pork farmer who suffers,” he said.

Lower demand also has processors rendering more offal into animal feed, according to the federation. Prices in that segment could come under pressure, however, as more processors try to grab market share.

“Everybody who can sell the stuff,” he said about offal, “they’re pretty much selling everything they can.”

Pet food makers could use more offal in their products in response to an increase of supply, said Dana Brooks, president of the Pet Food Institute, an industry group that represents the pet units of companies including Nestle SA (NESN.S), which sells Purina, and Mars Inc, which sells the Pedigree and Whiskas brands.

“The parts that we don’t eat here in America for pork often have nutritional value to our pets,” Brooks said.

Additional reporting by Theopolis Waters in Chicago and Dominique Patton in Beijing; Editing by Brian Thevenot