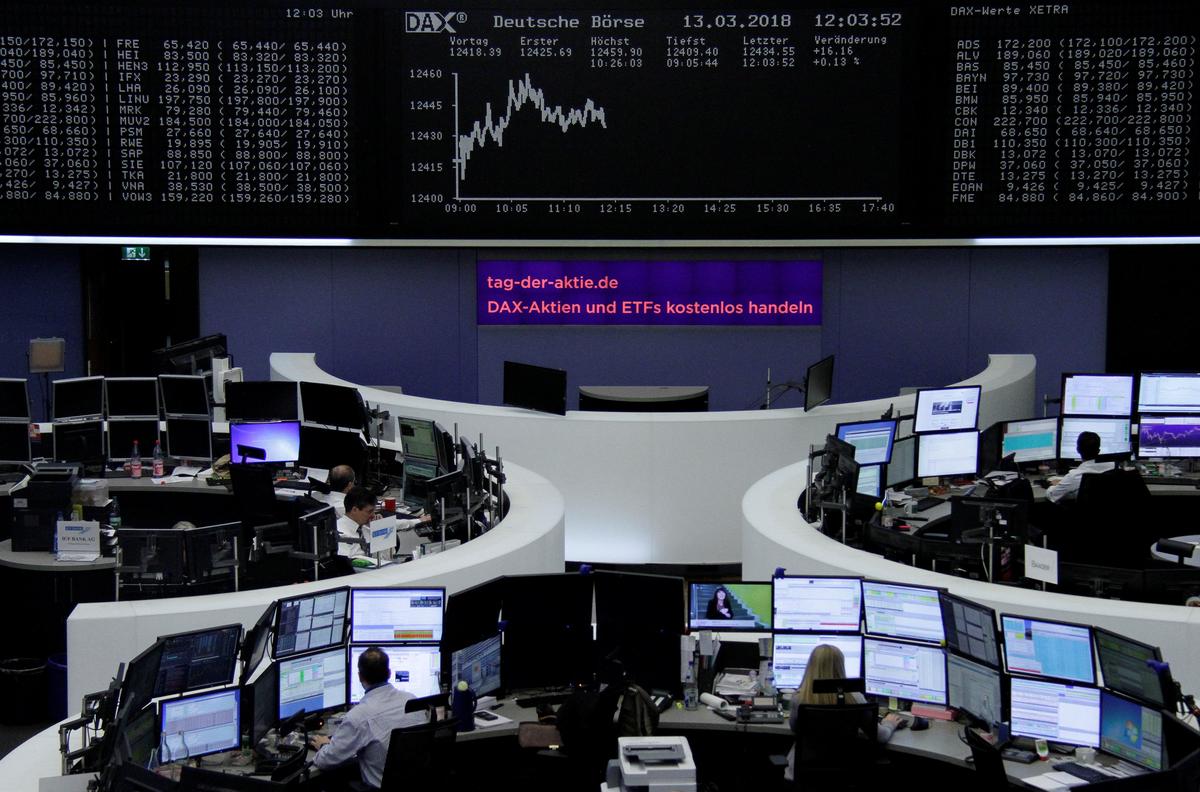 LONDON (Reuters) – Shares were under pressure for a second day on Wednesday and the dollar held near one-week lows after a threat by U.S. President Donald Trump to slap $60 billion in tariffs on Chinese imports rekindled investors’ concerns about the economic growth outlook.

The German share price index, DAX board, is seen at the stock exchange in Frankfurt, Germany, March 13, 2018. REUTERS/Staff/Remote

But markets struggled to overcome fears of a trade war and U.S. political uncertainty after Trump abruptly sacked Secretary of State Rex Tillerson.

The moves accelerated after news of the planned tariffs, which reportedly target Chinese tech, electronics and telecoms.

“…The fear is the United States and China could hurt each other quite badly in a trade war.”

The negative momentum faded somewhat in Europe, with a pan-European equity index up 0.3 percent after it fell 1 percent on Tuesday .

The index was boosted by a 1 percent jump in resources stocks which benefited from the Chinese data .SXPP as well as a 3-billion-euro share buyback at German sportswear firm Adidas (ADSGn.DE).

That left MSCI’s all-country equity index down only marginally .MIWD00000PUS, its second day in the red and off one-month highs hit before news broke of Tillerson’s sacking.

His departure brings to 35 the number of senior Trump administration officials who have left, Citi estimates.

The dollar has been another casualty, though it swung 0.15 percent higher after three days of losses. U.S. Treasury yields traded just off one-week lows touched earlier in the session .DXY US10YT=RR.

FILE PHOTO – A man walks past an electronic stock quotation board outside a brokerage in Tokyo, Japan, February 9, 2018. REUTERS/Toru Hanai

That news helped Brent oil futures up almost half a percent LCOc1 after two days of declines while copper futures jumped almost one percent.

Morgan Stanley analysts said the data suggested “that some tariff-related losses within its export business may be absorbed by strength elsewhere.”

The data highlighted the relatively robust position of China’s and also the world’s economy. The latter is slated to grow this year by 3.9 percent, according to the International Monetary Fund’s forecast in January.

While a U.S. rate rise next week is already priced in, Tuesday’s data showing annual U.S. core inflation steady at 1.8 percent did not persuade markets the Federal Reserve would raise rates more than three times this year.

That, along with the trade war fears, is keeping the dollar from strengthening much against a basket of currencies .DXY. It failed to make headway against the yen, against which it had briefly hit three-week highs around 107 yen. JPY=

“The developments support our outlook or a weaker U.S. dollar this year,” MUFG analyst Lee Hardman said, referring to events within the Trump administration and the trade fears.

Central banks in Japan and the euro zone, meanwhile, also stuck with their dovish message.

The former said most of its policymakers believed it should “persistently” pursue powerful monetary easing.

The euro slipped 0.2 percent against the dollar, inching off an overnight one-month high EUR= after European Central Bank President Mario Draghi said the ECB needed more evidence that inflation was rising toward target.

He warned of risks from “possible spillovers of the new trade measures announced by the U.S. administration.”