(This October 4 story corrects paragraph 17 to show Toyota has partnership, not investment, in Didi Chuxing.)

By Naomi Tajitsu and Sam Nussey

Japan’s biggest automaker and its most influential tech firm will jointly develop a platform to operate self-driving vehicles which can be used as mobile shops, hospitals and other services as they envision a future in which fewer people drive their own vehicles.

The tie-up shows that even big, well-funded firms want to share costs and expertise in pursuing promising but risky automotive technologies that have yet to gain widespread consumer acceptance.

The joint venture will start small with initial capital of 2 billion yen ($17.5 million). SoftBank will own just over half of the business, which will initially focus on Japan and eventually go global.

“SoftBank alone and automakers alone can’t do everything,” said Junichi Miyakawa, chief technology officer at SoftBank Corp who will be CEO of the new company. “We want to work to help people with limited access to transportation.”

The partnership will see Toyota and SoftBank work together to develop the automaker’s multi-purpose mobility service based on its “e-Palette” concept announced earlier this year, in which Toyota plans to produce the hardware and software for convoys of shuttle bus-sized, self-driving multi-purpose vehicles used, for instance, as pay-per-use mobile restaurants and hotels.

The joint company will be called MONET, short for mobility network, and will roll out an autonomous driving service using e-Palette by the second half of the 2020s, the companies said.

SoftBank will provide technology to collect and analyze transportation data to ensure cars are efficiently dispatched when and where they’re needed, they said.

“Toyota is hoping to increase its revenues by combining its own data with the data and expertise which SoftBank has culled from its mobile phone operations,” said Koji Endo, senior analyst at SBI Securities. 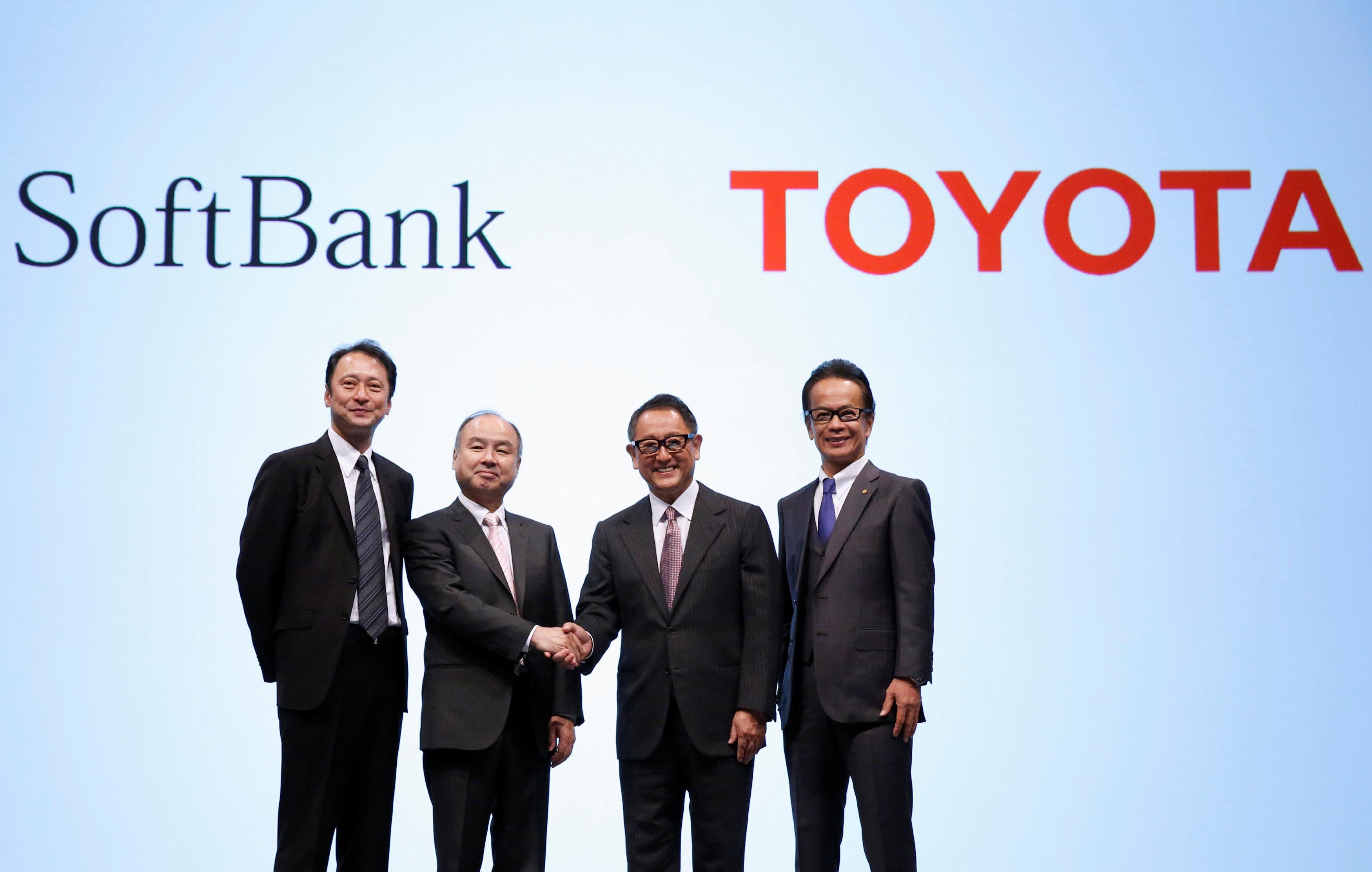 “The new company will enable SoftBank to widen its partner network, and it could be hoping to take a lead in developing platforms (for new transport services).”

A slew of automotive technology-related deals and discussions have already resulted in myriad pairings between global automakers, ride-hailing companies and major tech firms.

Honda Motor (7267.T) said on Wednesday it would invest $2.75 billion and take a 5.7 percent stake in General Motors Co’s (GM.N) Cruise self-driving vehicle unit, in which SoftBank is also an investor.

On the same day, Daimler AG (DAIGn.DE) and Renault SA (RENA.PA) said they may expand their cooperation to batteries, self-driving vehicles and mobility services.

The partnership between the two Japanese companies reflects SoftBank’s growing influence in the emerging fields of AI and autonomous driving, which has been accelerated by its investments via the almost $100 billion Vision Fund.

It is also a vote of confidence from SoftBank CEO Masayoshi Son, who has been critical of Japan for lagging overseas rivals, in Toyota’s vision for the future of cars.

“He has an image of the future,” Son told a media briefing, referring to Toyota President Akio Toyoda. “Automobiles are becoming a cluster of semiconductors, not screws, bolts and nuts.”

While both firms have been independently developing technologies for self-driving vehicles and car sharing, and each have investments in ride-hailing firms Uber Technologies [UBER.UL] and Grab, this is first time they have come together. SoftBank is also an investor in Didi Chuxing, while Toyota has a partnership with the Chinese ride-sharing company.

Toyota Executive Vice-president Shigeki Tomoyama said the partnership came after SoftBank’s widespread presence in the ride-hailing industry became apparent – it holds major stakes in the ride-hailing firms it had invested in and played a consolidating role in that industry.

Toyoda joked about rumors that the two companies did not get along, and recalled rejecting a business proposition from Son 20 years ago, when SoftBank had yet to make its name as one of the world’s largest technology investors.

“We are trying to take traditional car making into new fields,” he told reporters. “We realized that SoftBank shares the same vision when it comes to the future of cars, so it’s time that we partner together.”