With a strategy of loading up its revamped Ram 1500 full-size trucks with new features – ranging from 12-inch touch screens on the dashboard to large battery packs and electric motors to help adjust speed and gears and conserve fuel – the automaker is banking on a sustained surge in demand.

So Chief Executive Mike Manley is now reconsidering a decision announced in January to stop building Ram heavy-duty pickups at a plant in Saltillo, Mexico. That plant, and another in Warren, Michigan, between them would produce other Ram models and free up manufacturing capacity to make even more new trucks to eat into sales of Ford Motor Co’s F-Series or General Motors Co’s Chevrolet Silverado, and its higher-end GMC Sierra.

“We need to get ourselves into second” place, Manley told Reuters exclusively in his first interview since taking over the No. 7 global automaker after Sergio Marchionne died suddenly. “Frankly, I don’t care which of the two I take share from.”

Click tmsnrt.rs/2Pw99lX for a graphic on Detroit’s domination of U.S. pickup-truck sales.

When U.S. President Donald Trump was threatening action that would have imposed a 25 percent tariff on Mexican-made pickup trucks earlier this year, Fiat Chrysler said Saltillo would be “repurposed to produce future commercial vehicles.”

In 2017, Marchionne had raised the possibility his company could move heavy-duty pickup production out of Saltillo, saying U.S. tax and trade policy would influence the decision.

Now, the United States, Mexico and Canada have a tentative trade agreement that imposes no ceiling on shipments of pickups to the United States from Mexico, provided they meet thresholds for the share of parts produced within the region.

“With a combination of Warren and Mexico building what we call the classic truck, we have enough production to increase output next year if it’s required,” Manley said.

“In my opinion it will be required. We are gaining share. Obviously I am looking for that to continue, but it’s an incredibly competitive segment,” he added.

The Ram and Jeep brands underpin the automaker’s North American business – which accounted for nearly 85 percent of Fiat Chrysler’s second-quarter pre-tax profit – and offset the struggles of its legacy Fiat business in Europe and operations in China.

Ford’s F-Series trucks have led the segment for four decades. In 2017, Ford had a 35.6 percent share of U.S. retail truck sales, followed closely by GM at 34.2 percent and FCA with 22.3 percent.

Pickup trucks are the single biggest contributor to the Detroit Big Three automakers’ profits, so there is plenty at stake as they fight for market share.

In the battle for pickup customers, GM launched a new version of its Silverado truck designed with a focus on slashing weight and trimming production costs to compete with market leader Ford.

Fiat Chrysler, which reports third-quarter results on Tuesday, took a different tack with the new Ram. The automaker stuffed more features into the vehicle – including an optional 12-inch touch screen and partial electrification that saves fuel and helps with acceleration and cruise control – on a bet that customers would pay more in return.

Hayden Elder, owner of Elder Chrysler Dodge Jeep Ram in Athens, Texas, said three times in under a month he has had families trade in nearly-new large SUVs made by FCA’s rivals for a new Ram 1500.

“This new Ram is the biggest leap I’ve ever seen from one version to another,” Elder said. About 70 percent of the 800 vehicles he sells annually are trucks.

“HAVEN’T FOUND THE CEILING YET”

Phil Jansen, Fiat Chrysler’s head of product development, said when his team began redesigning the Ram 1500, they decided a lighter, all-aluminum body – which Ford uses for its trucks – was too expensive. GM executives reached the same conclusion.

But Fiat Chrysler took a chance that GM did not, and added a large battery pack and electric motor that assist with acceleration and shifting, plus deliver a smooth start-stop function that idles the engine when stopped in traffic, boosting fuel economy.

“It can save about this much fuel at an average stop,” said FCA electrification manager Brian Spohn, holding up a small tumbler of water.

The decision to offer a larger dashboard screen than its rivals have came late in the design process. Initially, the big screen was offered in the top three of the truck’s six versions. Fiat Chrysler has since decided to offer it on an additional version.

Demand is so high, the company has pushed the screen’s supplier for as many screens as it can provide, according to a source familiar with production plans.

“We haven’t found the ceiling yet” for what U.S. customers are willing to pay for additional features, said Jim Morrison, head of the Ram brand in North America.

Fiat Chrysler had problems earlier this year accelerating production of the new Ram truck on a highly-automated production line installed at a Detroit-area plant that previously made slow-selling sedans. 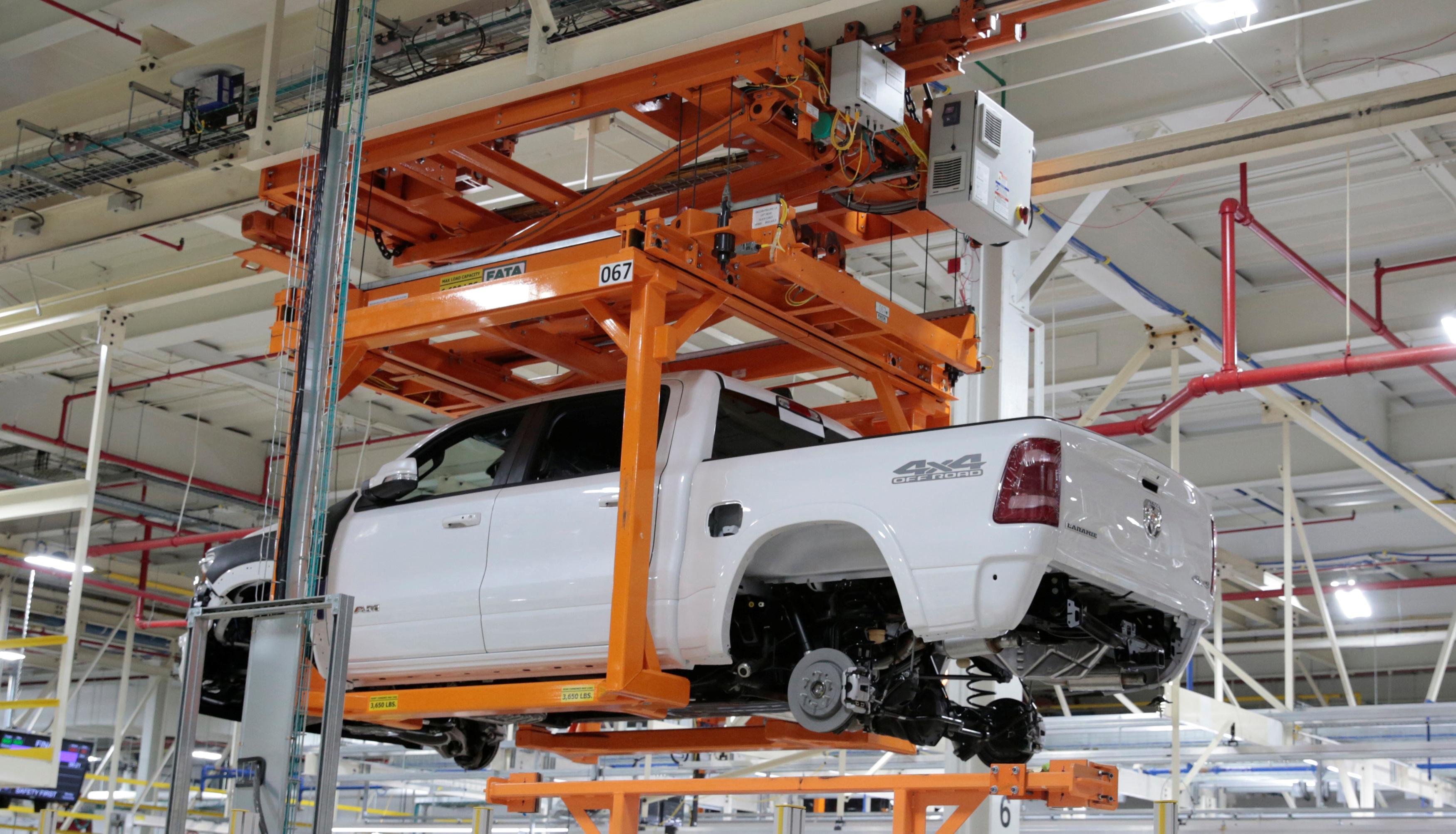 Among the problems: Dropped bolts and other debris would shut down automated vehicles that carried truck frames through part of the assembly process. The solution was to put debris-sweeping skirts on the carriers, FCA executives said on a recent tour of the plant.

Now, the Sterling Heights Assembly Plant is cranking out around 65 trucks an hour, 20 hours a day, six days a week – a pace of about 400,000 vehicles per year.

“It is capable, if we wanted to, to push it up more from there,” Manley told Reuters. “Clearly, having the capacity to fulfill our ambitions is important.”