BEIJING (Reuters) – China warned the United States on Sunday that any agreements reached on trade and business between the two countries will be void if Washington implements tariffs and other trade measures, as the two ended their latest round of talks in Beijing.

A short statement, carried by the official Xinhua news agency, made no mention of any specific new agreements after U.S. Commerce Secretary Wilbur Ross met Chinese Vice Premier Liu He.

It referred instead to a consensus they reached last month in Washington, when China agreed to increase significantly its purchases of U.S. goods and services.

“To implement the consensus reached in Washington, the two sides have had good communication in various areas such as agriculture and energy, and have made positive and concrete progress,” the state news agency said, adding details would be subject to “final confirmation by both parties”.

Xinhua said China’s attitude had been consistent and that it was willing to increase imports from all countries, including the United States.

“Reform and opening up and expanding domestic demand are China’s national strategies. Our established rhythm will not change,” it added.

“The achievements reached by China and the United States should be based on the premise that the two sides should meet each other halfway and not fight a trade war,” Xinhua said.

“If the United States introduces trade sanctions including raising tariffs, all the economic and trade achievements negotiated by the two parties will be void.”

There was no immediate comment or statement from the U.S. delegation or from Ross himself.

At the end of last month’s Washington talks the two countries released a joint statement.

But just when it appeared a trade truce between the two economic heavyweights was on the cards, the White House last week warned it would pursue tariffs on $50 billion worth of Chinese imports, as well as impose restrictions on Chinese investments in the United States and tighter export controls.

State-run Chinese newspaper the Global Times said in an editorial on its website that China needed to prepare for the long haul due to the U.S. propensity for changing its mind and coming up with new demands.

“Tariffs and expanding exports – the United States can’t have both,” it said. “China-U.S. trade negotiations have to dig up the two sides’ greatest number of common interests, and cannot be tilted toward unilateral U.S. interests.”

Xinhua said in a separate commentary that the United States should not test China with any further flip-flops or provocations.

“The Chinese government’s attitude of not wanting but also not fearing a trade war has never changed,” it said.

Ross arrived in Beijing on Saturday for talks after the Trump administration renewed tariff threats against China, and with key U.S. allies in a foul mood toward Washington after they were hit with duties on steel and aluminum.

U.S. Commerce Secretary Wilbur Ross, left, shakes hands with Chinese Vice Premier Liu He as they pose for photographers after their meeting at the Diaoyutai State Guesthouse in Beijing, Sunday, Jun 3, 2018. Andy Wong/Pool via Reuters

Addressing Liu earlier in the day at the start of their formal talks at a government guest house, Ross praised the tone of their interactions.

“Our meetings so far have been friendly and frank, and covered some useful topics about specific export items,” Ross said, in brief comments before reporters.

Liu spoke only to welcome Ross.

Neither man has made any other comments to the media.

Liu, a Harvard-trained economist who is a trusted confidant of Chinese President Xi Jinping, is China’s chief negotiator in the trade dispute.

The purchases are partly aimed at shrinking the $375 billion U.S. goods trade deficit with China.

Mnuchin, speaking at a G7 finance leaders meeting in Canada where he was the target of U.S. allies’ anger over steel and aluminum tariffs, said the China talks would cover other issues, including the Trump administration’s desire to eliminate Chinese joint venture requirements and other policies that effectively force technology transfers.

“I want to be clear, this isn’t just about buying more goods, this is about structural changes,” Mnuchin said.

“But I also fundamentally believe that if there are structural changes that allow our companies to compete fairly, by definition, that will deal with the trade deficit alone.” 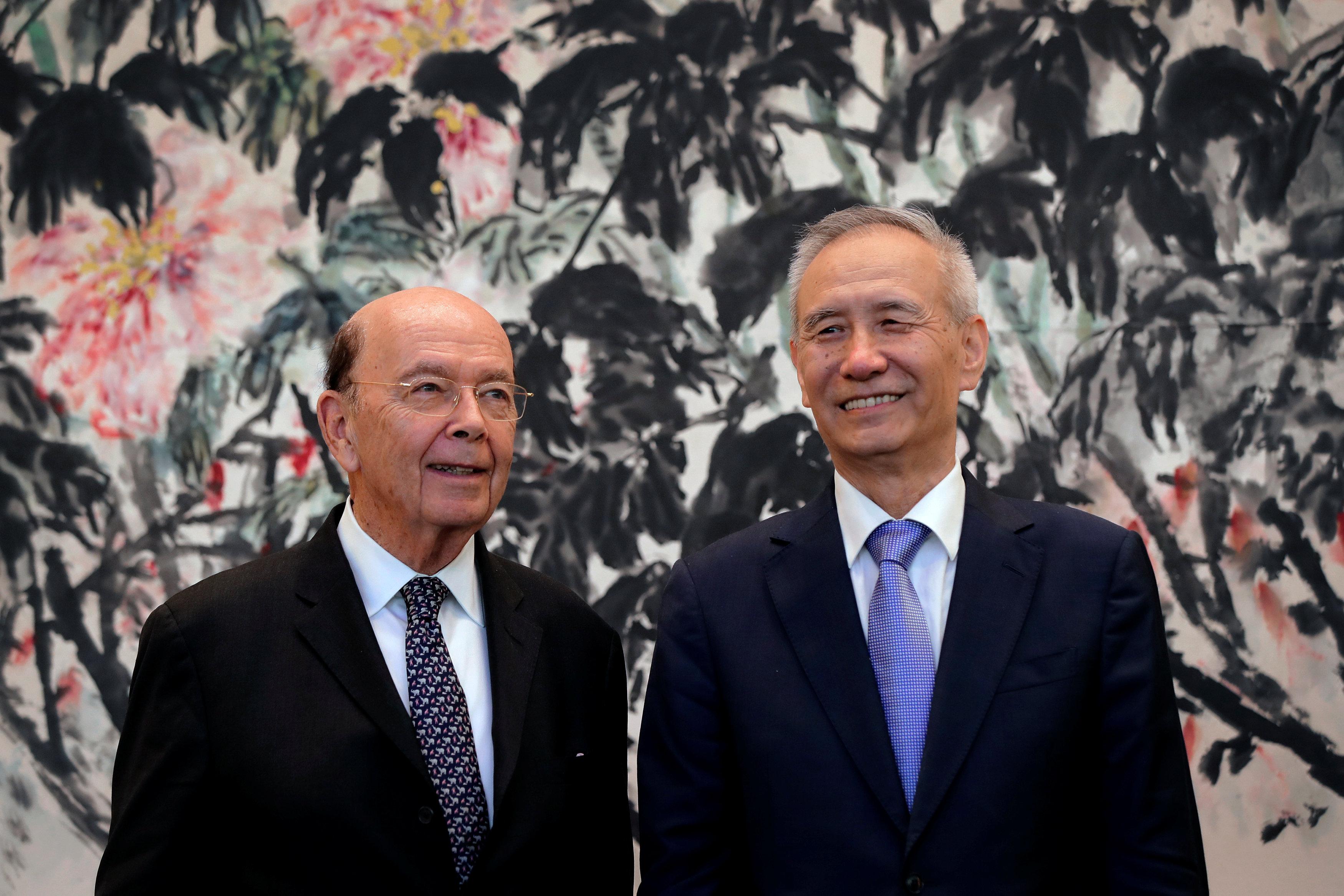 Ross, who was preceded in Beijing last week by more than 50 U.S. officials, had been expected during the two-day visit to try to secure long-term purchases of U.S. farm and energy commodities to help shrink the U.S. trade deficit.

The U.S. team had also wanted to secure greater intellectual property protection and an end to Chinese subsidies that have contributed to overproduction of steel and aluminum.