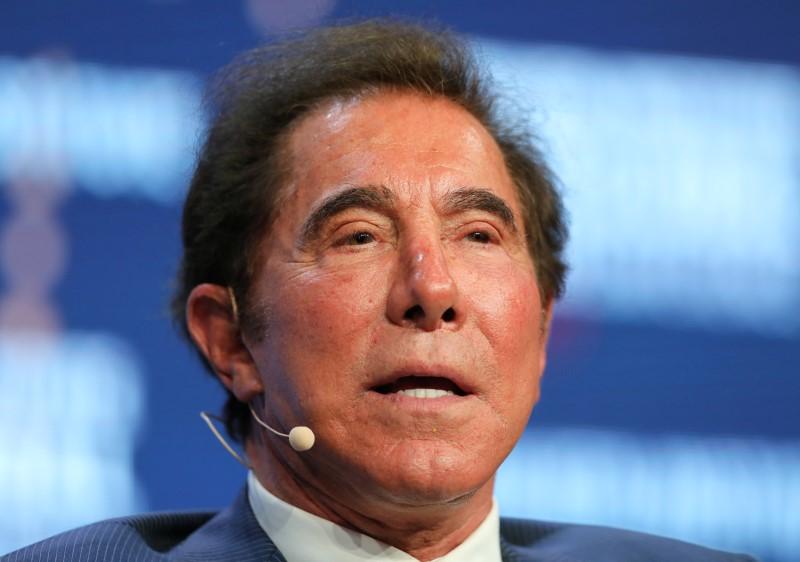 (Reuters) – Steve Wynn, the former chief executive of Wynn Resorts Ltd, has disposed his entire 11.8 percent stake in the firm for $2.1 billion in a dramatic exit of the casino and hotel enterprise he founded over 16 years ago.

In an unexpected separate move, Macau casino operator Galaxy Entertainment said it has agreed to buy 5.3 million primary shares of Wynn Resorts at $175 per share, giving them around a 5 percent stake in the operator which has resorts in Las Vegas and Macau.

Galaxy is one of six licensed operators in the world’s largest gambling hub of Macau and competes with Wynn along with Sands China, MGM China and Melco Resorts.

The casino mogul’s share sale comes a week after Wynn Resorts said Steve and Elaine Wynn, who has a 9.26 percent stake, had scrapped a shareholder agreement that prevented them from selling their stakes.

Steve Wynn resigned as CEO of the Las Vegas-based company last month, following claims he subjected women who worked for him to unwanted advances. He has denied the accusations.

In a joint statement by Galaxy and Wynn on Wednesday, Galaxy Vice Chairman Francis Lui said it was a unique opportunity to “acquire an investment in a globally recognised entertainment corporation with exceptionally high quality assets and a significant development pipeline.”

A Galaxy spokeswoman could not comment further on whether Galaxy would look to increase its holding in the future.

The announcement also follows the settlement two weeks ago of long standing litigation between Wynn Resorts and Universal Entertainment Corporation.

A Thursday filing showed the embattled founder sold 4.1 million shares of Wynn Resorts at $180 per share – effectively exiting his entire 12.1 million shares, or 11.8 percent stake in the firm, for a total of $2.14 billion.

Wynn, who started in Las Vegas casinos in the 1960s, created some of Las Vegas’ most iconic landmarks – the Mirage, Bellagio and Treasure Island.

He was forced to sell his multi-billion dollar operation Mirage Resorts to tycoon Kirk Kerkorian in a hostile takeover in 2000. Kerkorian then created MGM Mirage and Wynn went on to create Wynn Resorts with his ex-wife in 2002.

The 76 year old businessman, whose signature denotes the company’s logo, had built two lavish resorts in the former Portuguese colony of Macau where only six firms have licenses to operate casinos.

Vitaly Umansky, analyst at Sanford C. Bernstein in Hong Kong, said the implications of the Galaxy’s investment goes beyond what looks like a passive move at this stage.

“Wynn and Galaxy may be looking at collaborating on future development opportunities in Asia, with Japan being the critical development initiative.”

Galaxy’s octogenarian founder Lui Che Woo, one of Asia’s wealthiest billionaires, has a net wealth of $22 billion according to Forbes. Lui who started his career in construction has grown his casino company into one of Macau’s biggest operators over the past decade.

“There are other large gaming companies who do not have a presence in Macau, but who desperately want to be in Macau, and we would not be surprised to see them angling for a seat at the acquisition table too,” said Grant Govertsen, analyst at Union Gaming in Macau.

While Galaxy has been primarily focused on Macau with its three casinos, it this week received a license to operate a roughly $500 million resort in Boracay, the Philippines most famous holiday island.

Wynn, which operates a resort on Cotai and Macau’s main peninsula, focuses on premium and VIP customers, while Galaxy targets both the high end segment and the broader mass. Both companies have reported strong earnings growth in the fourth quarter with Galaxy posting a 67 percent surge in 2017 profit.

Shares in Wynn Macau and Galaxy dropped 3.9 percent and 2.9 percent respectively on Friday against the benchmark Hang Seng Index which was down 3.1 percent.

Reporting by Farah Master in Hong Kong and Philip George in Bengaluru; Editing by Shri Navaratnam