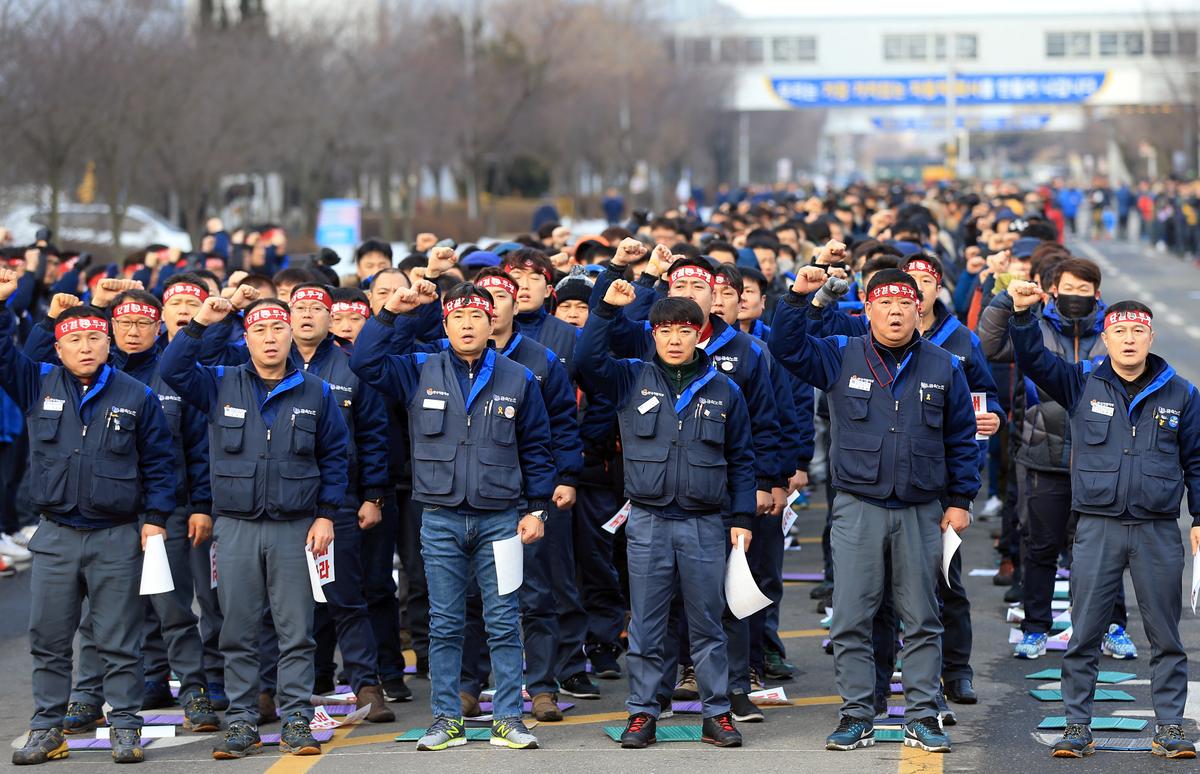 GUNSAN/SEOUL (Reuters) – General Motors’ (GM) workers at a South Korean plant staged a protest on Wednesday against its planned closure, calling the move by the U.S. automaker a “death sentence”, and threatening a strike.

GM’s South Korean unit launched a voluntary redundancy scheme for its 16,000-strong workers in the Asian nation after announcing on Tuesday it will shutter the plant in Gunsan by May and decide within weeks on the fate of the remaining three plants in the country.

Unionized workers at the Gunsan plant, which employs 2,000 people, wore red headbands saying “Solidarity, Fight” and held leaflets demanding the withdrawal of the closure plan. Some had shaved their heads.

“Let’s protect our right to live by ourselves,” Kim Jae-hong, the leader of the workers’ union at the Gunsan branch, said amid tears.

GM’s planned revamp of its loss-making South Korea operations is the latest in a series of steps by the automaker to put profitability and innovation ahead of sales and volume. Since 2015 GM has exited unprofitable markets including Europe, Australia, South Africa and Russia.

It is offering South Korean workers three times their annual base salary, money for college tuition and more than $9,000 towards a new car as part of the redundancy package.

A spokesman of GM Korea, the local unit, said the company would continue discussions with the union and seek their understanding over the closure plan.

But workers were far from placated. The union will establish a detailed plan in protest against the shutdown move that could include a possible strike and holding of a sit-in rally at the headquarters of GM Korea, according to the union’s Gunsan branch.

“We can’t accept this. The company informed us about the closure plan, not asking for our opinion. It was already the end of the discussions,” Dang Sung-geun, a senior official at the union of GM Korea, told Reuters by phone.

“This is like a death sentence notice before the Lunar New Year holidays.”

Dang said about 1,200 unionized workers from GM Korea joined the protest at the Gunsan factory, a day before the Asian country begins lunar new year holidays. Gunsan is located in the southwest of the country.

South Korea’s trade ministry said on Wednesday it will take a dispute against the United States to the WTO, involving imposition of high anti-dumping duties on South Korean steel and transformers.

GM executives have complained about South Korea’s relatively high wages and its strike-prone labor union. But Dang of GM Korea’s union blamed the company for reducing output, saying lower wages were not acceptable.

“The South Korean auto industry’s high cost and low productivity has been a deep-rooted issue, which can’t be fixed overnight, but we will try to resolve this issue by building trust with the unions and the companies,” said the official who asked not to identified.