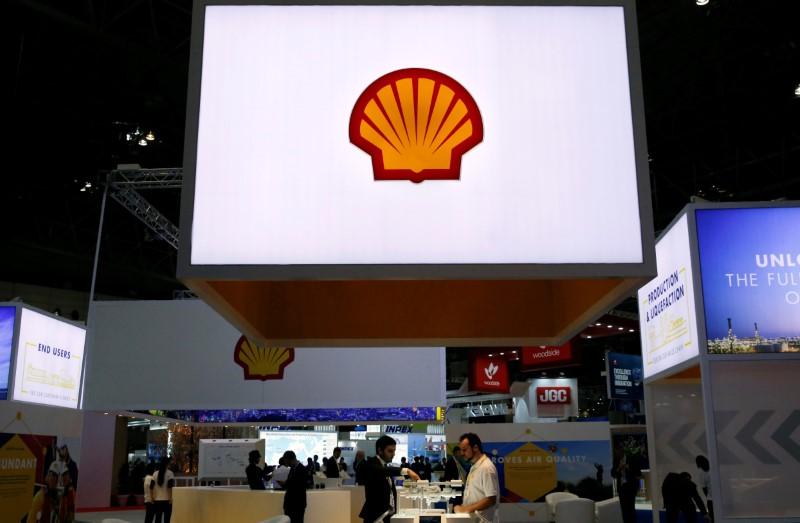 LONDON (Reuters) – Oil giants Royal Dutch Shell and Eni have voluntarily filed to U.S. authorities internal probes into how they acquired a giant field in Nigeria as the companies seek to fight corruption allegations in Europe and Africa.

The filings, to the U.S. Department of Justice (DOJ) and the Securities and Exchange Commission (SEC), do not mean U.S. authorities are investigating Shell or Eni.

But the move shows the companies are trying to preempt questions from the United States as they face one of the oil industry’s biggest-ever graft trials in Italy, to begin in May in Milan, a pending trial in Nigeria and an investigation in the Netherlands.

The case revolves around the purchase of a huge block off oil-rich Nigeria, known as OPL 245, which holds an estimated 9 billion barrels in reserves. [reut.rs/2Fveiph]

Italian prosecutors allege that bribes were paid in an effort to secure rights to the block in 2011. A number of top executives from both companies – including Eni Chief Executive Claudio Descalzi and former Shell Foundation Chairman Malcolm Brinded – will face trial.

Under Italian law a company can be held responsible if it is deemed to have failed to prevent, or attempt to prevent, a crime by an employee that benefited the company.

Both companies’ shares are traded on U.S. stock exchanges, putting their foreign dealings in the scope of U.S. authorities.

Shell and Eni, on behalf of subsidiaries, in 2010 entered deferred prosecution agreements with the DOJ over separate Nigerian corruption allegations.

Those pacts dismissed charges after a certain period in exchange for fines and an agreement to fulfill a number of requirements. They concluded in 2013 and 2012, respectively.

“A company’s disclosure of alleged foreign corruption to both the SEC and the DOJ in the U.S. typically means the company believed U.S. authorities needed to be made aware of this, and both agencies have the authority to prosecute under the (Foreign Corrupt Practices Act, or FCPA),” said Pablo Quiñones, executive director of the New York University School of Law program on corporate compliance and enforcement.

Quiñones previously worked as chief of strategy, policy and training at the DOJ’s criminal fraud section, a role that included helping to develop FCPA enforcement policy.

The SEC and the DOJ declined to comment on the company disclosures or whether they were looking into any allegations surrounding the block.

Eni noted its disclosure in an SEC filing, in which it said“no evidence of wrongdoing on Eni side were detected”. Shell has said publicly that it submitted the investigation to U.S. authorities and to Britain’s Serious Fraud Office.

Shell and Eni deny any wrongdoing. They say their payments for the block, a total of $1.3 billion, were transparent, legal and went directly into an escrow account controlled by the Nigerian government.

The companies and legal experts say the trial will last more than a year, with potential appeals stretching several years beyond that.

“The risk for companies is of a prolonged period of exposure to open court allegations from a state prosecutor of impropriety,” Anthony Goldman of Nigeria-focused PM Consulting said.“That will be painful and damaging.”

The Milan prosecutor charges that roughly $1 billion of the payments were funneled to a Nigerian company called Malabu Oil and Gas, which had a disputed claim on the block, and former oil minister Dan Etete, who British and U.S. courts have said controlled Malabu. Reuters has been unable to reach Etete or Malabu for comment.

The logo of Italian oil and gas group Eni is seen on the facade of its headquarters in Rome, Italy, December 23, 2017. REUTERS/Alessandro Bianchi

Shell has since said it knew some of the money would go to Malabu to settle its claim, though its own due diligence could not confirm who controlled the company. Eni said it never dealt with Etete or knew he controlled the company, but that the government promised to settle all other claims on the block as part of their deal. (reut.rs/2Fr6G3y)

“If the evidence ultimately proves that improper payments were made by Malabu or others to then current government officials in exchange for improper conduct relating to the 2011 settlement of the long standing legal disputes, it is Shell’s position that none of those payments were made with its knowledge, authorisation or on its behalf,” Shell said in a statement.

The proceedings have also brought together investigators in several countries, with authorities in Nigeria and the Netherlands sending information to Milan.

A Dutch anti-fraud team in 2016 raided Shell offices as part of the investigation, and a Dutch law firm has asked prosecutors to consider launching a criminal case in the Netherlands.

“I’m not aware of many cases where this many jurisdictions have been at work for so long helping each other out. The amount of cooperation is very unusual,” said Aaron Sayne of the Natural Resource Governance Institute, a non-profit group that advises countries on how to manage oil, gas and mineral resources.

A case by Nigeria’s financial watchdog, the Economic and Financial Crimes Commission, against defendants including the former attorney general, ex-ministers of justice and oil and various senior managers, current and former, from Shell and Eni, will continue in June.

There has also been at least one effort to take away the asset. Experts say it is worth billions, and Shell has spent millions developing it. Eni intends to make a final investment decision this year on developing the block and said in corporate filings that the asset has a book value of 1.2 billion euros ($1.5 billion).

The Italian court does not have the ability to rescind rights to the block, and Nigerian oil minister Emmanuel Ibe Kachikwu has said the companies should continue to develop it.

But in a lawsuit filed by the Nigerian government against JPMorgan in London for the U.S. bank’s role in transferring money from the deal, it called the agreement that facilitated Shell and Eni’s purchase “unlawful and void”. (reut.rs/2FxBFOR)

A JPMorgan spokeswoman previously said the firm“considers the allegations made in the claim to be unsubstantiated and without merit”.

Additionally, a Nigerian court last year briefly ordered the seizure of the block.

That decision was later overturned, and Shell and Eni say they are not worried about losing the asset. But the ruling and the language in the government’s suit against JPMorgan underscore the risk. [reut.rs/2D88rRe]

“It’s a nice, stable asset that could produce a lot of oil for a long time,” Sayne said.

Reporting by Libby George; Additional reporting by Stephen Jewkes and Emilio Parodi in Milan and Ron Bousso in London; Editing by Dale Hudson