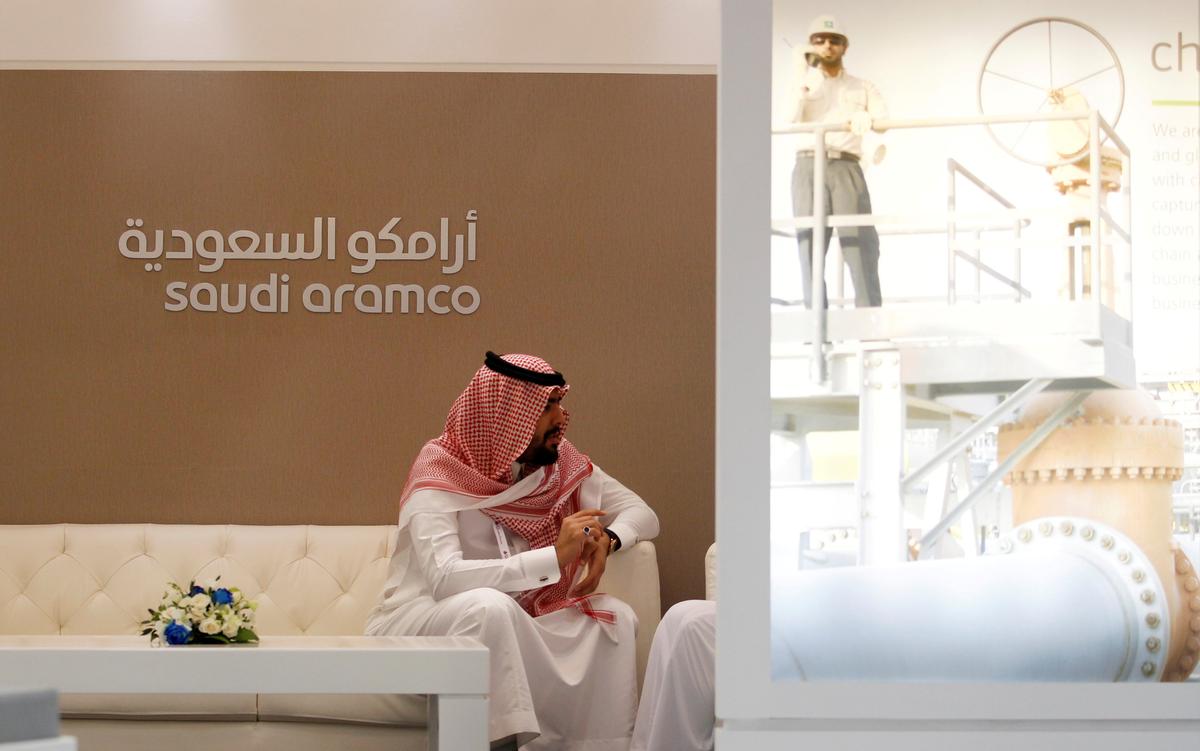 DUBAI/LONDON (Reuters) – Saudi Arabia is increasingly looking to just float oil giant Saudi Aramco locally as plans for an initial public offering (IPO) on an international exchange such as London or New York hang in the balance, sources close to the process said.

FILE PHOTO: A Saudi Aramco employee sits in the area of its stand at the Middle East Petrotech 2016, an exhibition and conference for the refining and petrochemical industries, in Manama, Bahrain, September 27, 2016. REUTERS/Hamad I Mohammed/File Photo

The kingdom is counting on being awarded emerging market status by index complier MSCI in June to help Saudi Aramco attract Western funds, in addition to cornerstone investors from China, Japan and South Korea, the sources said.

“I would guess it is about evens that there will be no international IPO,” said a high-level source familiar with the preparations, saying they were proving to be a disappointment.

Saudi Arabia is planning to list up to 5 percent of Saudi Aramco in an initial public offering that could value it at up to $2 trillion and make it the world’s biggest oil company by market capitalization.

Saudi Energy Minister Khalid al-Falih said last week that Aramco was too important to risk listing in the United States because of litigation concerns, such as existing lawsuits against rival oil companies for their role in climate change.

British officials have been told by Saudi counterparts London has a chance to secure the listing but only in 2019 at the earliest, according to the Financial Times, and sources told Reuters the kingdom was now focusing on a listing on the local exchange, or Tadawul.

“The only thing we know today is that Tadawul will be the key listing location as our national exchange,” Falih told CNN.

“We are waiting for the reforms to be in place and to join MSCI and Aramco listing in Tadawul will be catalytic for that capital market as we bring international capital to the kingdom,” he told the U.S. channel last week.

The initial public offering is the centerpiece of Crown Prince Mohammed bin Salman’s plan to diversify the Saudi economy beyond oil and it would also boost the kingdom’s budget which has been hit by low oil prices.

Initially planned for 2018, preparations have been hit by rows over whether Aramco should list on major Western markets at all. An advisory council to the government asked the securities regulator this year to study the impact of a local listing amid concern a huge IPO could harm the market.

MSCI has proposed giving its existing Saudi Arabia stock index emerging market status rather than standalone status following a series of market reforms by the kingdom such as raising caps on foreign ownership of companies.

MSCI will give its decision in June and, if positive, the reclassification would be in two steps in May and August 2019.

According to an update of the MSCI proposal published in February, Saudi Arabia would have a market capitalization of $124 billion in MSCI’s Emerging Markets Index, giving it an index weight of 2.3 percent, on a par with Thailand.

Based on the assumption that another $100 billion would be added through an Aramco initial public offering, the kingdom’s weighting would rise to about 4 percent, which would be bigger than Russia’s weighting of 3.4 percent, for example.

If MSCI grants Saudi Arabia emerging market status, it could be seen as a reason to push against an international listing, the sources close to the listing process said.

Passive investment funds that replicate MSCI indexes would need to put 4 percent of their funds allocated to emerging market indexes into Saudi shares to match the country weighting.

According to MSCI, $1.7 trillion of assets were benchmarked against MSCI emerging market indexes at the end of June last year, of which about a fifth was from passive investors.

That could mean $13.6 billion could come into Saudi stocks from passive investors and if active investors also increased their Saudi exposure to the weighting following an Aramco IPO the total inflows could be $68 billion.

With the prospect of a listing in London and New York receding, sources familiar with the IPO told Reuters that Hong Kong was now emerging as an increasingly likely compromise because Riyadh wants to help Asian nations that are expected to become cornerstone investors.

While London is preferred over New York, the requirement by both for greater disclosure of sensitive information on Aramco than the Hong Kong exchange is viewed as a drawback by some Saudi officials and advisers, the sources said.

Saudi Aramco said on Monday it was still reviewing its options for the initial public offering.

A final decision will be made by Mohammed bin Salman, who oversees the kingdom’s economic and oil policies.

Sources have told Reuters it requires a bourse at least six month to prepare for a listing so a decision would need to be taken in April for the IPO to go ahead this year.

Tadawul’s chief said in October that his exchange hoped to be the only venue. But with a total capitalization of about $475 billion, it could struggle to absorb Aramco without the participation of foreign funds.

Sources close to the process, however, said even with emerging market status, Aramco would struggle to raise $100 billion locally. Bankers and analysts said an Aramco float risked drowning out other shares listed on Tadawul, given daily turnover now is about $1.6 billion.

“They can do a nominal 2 to 2.5 percent listing,” one of the sources said.