NEW YORK (Reuters) – Unthinkable just two months ago as the world economy shut down in response to the coronavirus pandemic, the U.S. stock benchmark S&P 500 index broke through the psychologically-important 3,000 level on Tuesday, capping a 37% stock rally since its March low.

Flags hang on the outside of the New York Stock Exchange as the building opens for the first time since March while the outbreak of the coronavirus disease (COVID-19) continues in the Manhattan borough of New York, U.S., May 26, 2020. REUTERS/Lucas Jackson

But the market may be priced for an economic recovery that the data so far does not support, and some participants say the rally has gone too far, too fast.

It has been fueled by extraordinary interventions by the Federal Reserve and other central banks, a $2 trillion stimulus passed by Congress, and hopes that the rapid development of a vaccine will mean that the worst of the damage from the global economic freeze has passed.

“People have been locked up and when they see sparkles of hope like vaccines, that drives optimism probably ahead of where it should be and clearly ahead of the economy,” said Richard Steinberg, chief market strategist at the Colony Group.

Analysts cautioned that they do not expect the market to continue its rapid path upward.

“In my personal view, the underlying assumption for this recovery are a bit too optimistic,” he said. “Second- and third- order effects have not been fully priced in at this stage.”

The market spike has come against a devastating economic backdrop. The U.S. economy lost 20.5 million jobs in April, the most since the Great Depression. [nL1N2CP2KQ]

“It is pretty extraordinary,” said Michael Purves, chief executive of Tallbacken Capital Advisors. “It is a ‘V’ market with probably not a ‘V’ economic condition,” he said, referring to the shape of the possible recovery.

“If things go well, we could have a vaccine by the first of the year,” Cardillo said. “It’s a rally of hope.”

It is being partly driven by five giants – Amazon.com Inc (AMZN.O), Microsoft Inc (MSFT.O), Apple Inc (AAPL.O), Facebook Inc (FB.O), and Google-parent Alphabet Inc (GOOGL.O) – make up approximately 20% of the weight of the S&P 500 index, pushing the broad market up as investors herd into companies that have seen increased demand during the economic freeze.

Amazon, for instance, is up nearly 45% since its March low, while Facebook is up 62%.

Some justify the gains by comparing the U.S. economy to China, which is about two months ahead in terms of both the virus outbreak and recovery.

China’s composite purchasing managers index fell by more than half in January, yet by April was above its reading at the beginning of the year. U.S. Composite PMI, meanwhile, began its steep drop in February and posted a nearly 35% gain in May, according to flash figures from Markit.

“Perhaps the revival within the U.S. will not be as quick nor as dramatic as it has reportedly been in China,” said Jim Paulsen, chief investment strategist at the Leuthold Group. “But the economic pattern exhibited by the U.S. economy, thus far, is similar (with a lag) to the experience of China.” 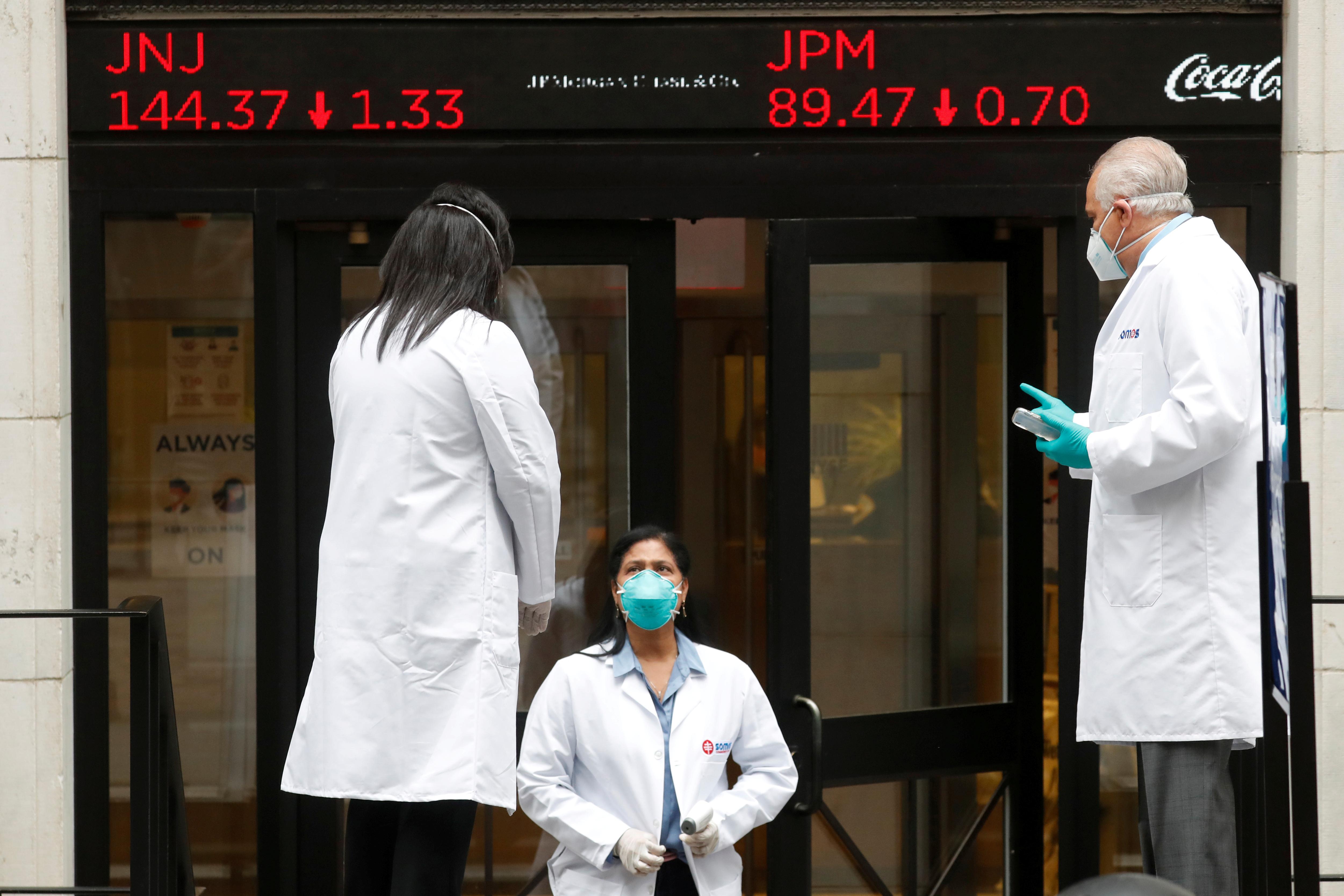 Investors are looking for light at the end of the tunnel.

New York was long the epicenter of the U.S. outbreak but Governor Andrew Cuomo said on Tuesday that Memorial Day, which fell on Monday, would show “we turned the page on COVID-19” and refocused on reopening.

In a sign of survival of the financial heart of the city, the New York Stock Exchange partially reopened its trading floor.