SACRAMENTO (Reuters) – PG&E Corp, owner of the largest U.S. power utility, filed for bankruptcy protection on Tuesday in anticipation of liabilities in excess of $30 billion from the deadliest wildfires in California’s history.

PG&E, which provides electricity and natural gas to 16 million customers in northern and central California and employs 24,000 people, vowed to keep the lights on and continue with critical investments it said were needed in its system’s safety and maintenance.

“The power and gas will stay on … We are not ‘going out of business,’ and there will be no disruption in the services you expect from us,” interim Chief Executive John Simon said in a letter to customers.

PG&E faced no immediate cash crunch. Its decision to file for bankruptcy was driven by its assessment of upcoming legal liabilities. While state investigators cleared PG&E this month of liability in a 2017 wildfire in California’s wine country, the company is expected to be found liable for a fire that killed at least 86 people in northern California in November.

The San Francisco-based company faces lawsuits from owners of homes and businesses that burned during that and other fires. Filing for bankruptcy temporarily shields PG&E from these claims, allowing it to negotiate settlements in bankruptcy court.

“That was PG&E’s choice but it does not change my focus, which remains protecting the best interests of the people of California,” Gavin Newsom, who took office as governor of California earlier this month, said in a statement.

BlueMountain Capital Management LLC, an investment firm that owns about 2 percent of PG&E, called the company’s move “reckless” and detrimental to shareholders. It has vowed to launch a proxy contest next month to replace PG&E’s board directors.

PG&E’s shares jumped on Tuesday as investors speculated over how much equity holders will be able to recover.

PG&E listed assets of $71.39 billion and liabilities of $51.69 billion as of Sept. 30 in the voluntary Chapter 11 document filed in the U.S. Bankruptcy Court for the Northern District of California, indicating that its equity would likely retain at least some of its value.

PG&E’s shares were trading up 15.6 percent at $13.88 in afternoon trading, giving the company a market value of $7.1 billion. Still, the stock remains down close to 80 percent since October, before the latest round of wildfires broke out. PG&E had said earlier this month it was preparing for bankruptcy.

PG&E is seeking court approval for $5.5 billion in debtor-in-possession financing from J.P. Morgan, Bank of America, Barclays, Citi, and other banks, it said. The sum is roughly equal to PG&E’s annual spending.

PG&E also carries a debt load of more than $18 billion. Company advisers expect that it may take two years or more to emerge from bankruptcy.

An arcane California legal rule, known as “inverse condemnation,” exposes California utilities to liabilities from wildfires regardless of their negligence as long as their equipment is involved.

This has raised concerns among some PG&E investors that exiting bankruptcy could take longer if there were more wildfires, a real threat given that climate change has turned the blazes into an annual occurrence.

Investors in other utilities are fretting as well. Shares of Rosemead, California-based Edison International, for example, are down 20 percent since the November wildfires.

Federal energy regulators said on Friday they had joint jurisdiction with a bankruptcy court over requests to cancel or renegotiate power contracts by PG&E.

“We ultimately continue to view power-purchase agreements as being fully honored by PG&E in our base-case scenario where key California Public Utilities Commission, legislative and other stakeholders with strong ties to the state’s environmental goals intervene in the bankruptcy process,” JPMorgan analysts wrote in a research note this week. 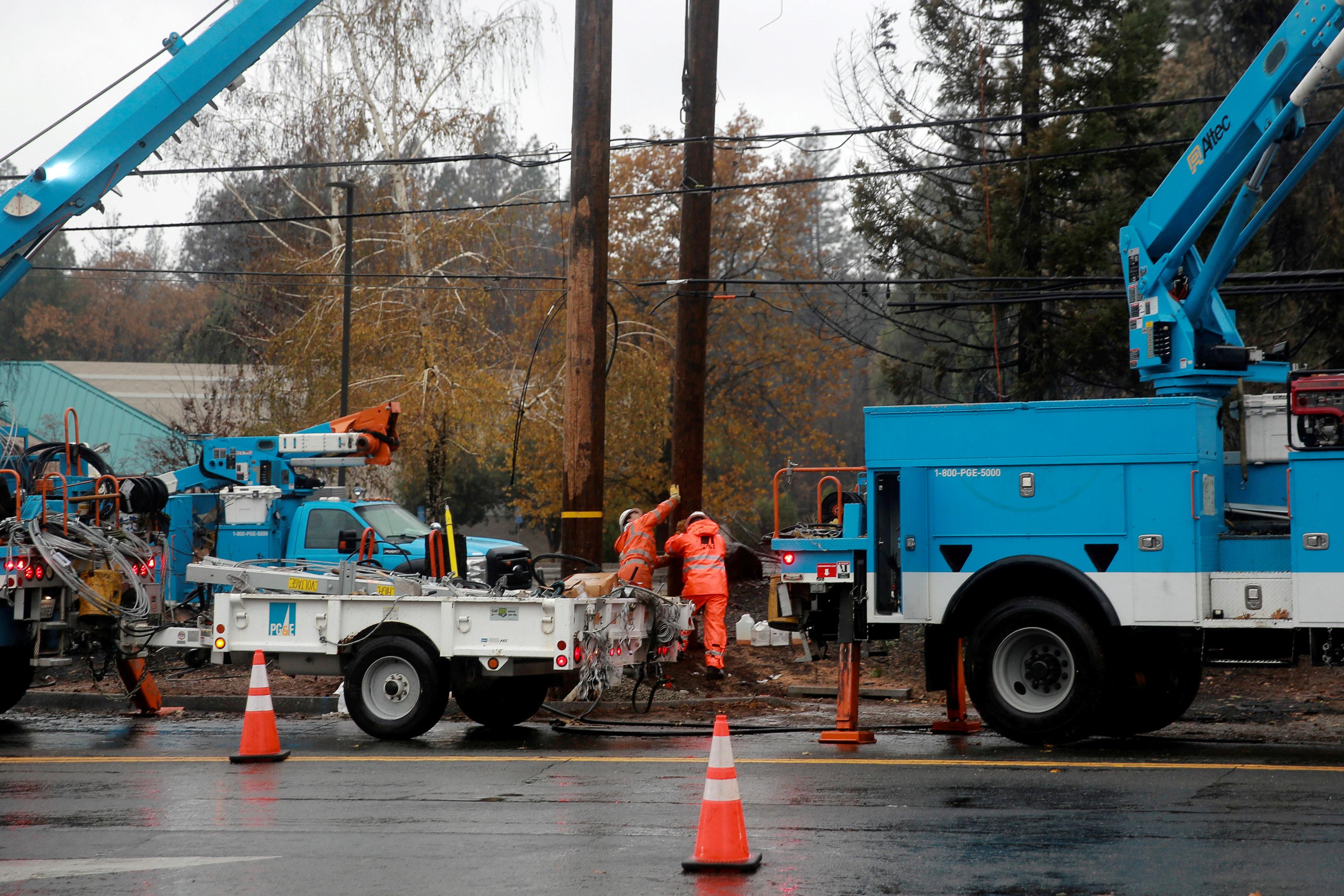 Last year, lawmakers gave PG&E permission to raise rates to cover wildfire losses from 2017. But elected officials have shown little appetite for new rate hikes or other maneuvers to prevent a bankruptcy filing.

This is the second bankruptcy for PG&E in as many decades. Its subsidiary Pacific Gas and Electric Company filed for bankruptcy in 2001, at the height of California’s energy crisis. It exited bankruptcy three years later.

Reporting by Sharon Bernstein in Sacramento; Additional reporting by Subrat Patnaik in Bengaluru and Jim Christie in San Francisco; Editing by Meredith Mazzilli and Nick Zieminski