STOCKHOLM (Reuters) – Step into one of the more than 4,300 H&M (HMb.ST) budget fashion stores around the world and you often know what to expect: clothes racks crammed with tops, trousers and skirts in a spartan and sometimes cluttered environment.

H&M executives say that’s no longer good enough. Sales have stagnated for years, the company’s shares have lost nearly two-thirds of their value since 2015 and more nimble rivals have adapted faster to the rapidly shifting retail landscape.

Now, at a spruced-up pilot store in H&M’s home town of Stockholm, the chain founded in 1947 is testing new concepts that mark a break with its past – and partly echo some tactics already deployed by rivals to attract shoppers.

The H&M store in the upmarket Karlaplan neighborhood of the Swedish capital offers a smaller range of selected clothes, displayed on airy shelves and tables in color-coordinated sections – as well as espressos and invitation-only events.

H&M planned the layout and ranges with affluent local customers in mind, marking a shift from offering relatively standardized ranges across its stores to catering more for local tastes and means.

“It’s an appealing store, visually, and also the range feels appealing to me. I’m more inclined to head here first rather than to the other stores,” said Josefin Klegard, 38, sipping sparkling wine at an event for local loyalty club members with a pop-up beauty parlor and H&M designers talking about trends.

In Karlaplan, there’s a high concentration of clothes from H&M’s more upmarket lines such as “Trend” and “Premium Quality”, which is usually only available online. H&M’s Swedish website sells “Premium Quality” leather coats for 3,499 crowns ($397) while most H&M coats are priced well below 1,000 crowns.

“We have to raise the entire quality level: to have fewer items in, a nicer presentation of the goods,” said Chief Executive Karl-Johan Persson, the grandson of H&M’s founder.

“That is a task, to be able to sell more with less, and to do that in a cost-efficient way,” he told Reuters.

After decades of rapid expansion, H&M had 4,801 stores in 69 countries at the end of May, making it the world’s second biggest fashion retailer after Spain’s Inditex (ITX.MC), which owns the Zara brand. But more than two years of sluggish sales had left H&M with $4.1 billion of unsold stock. 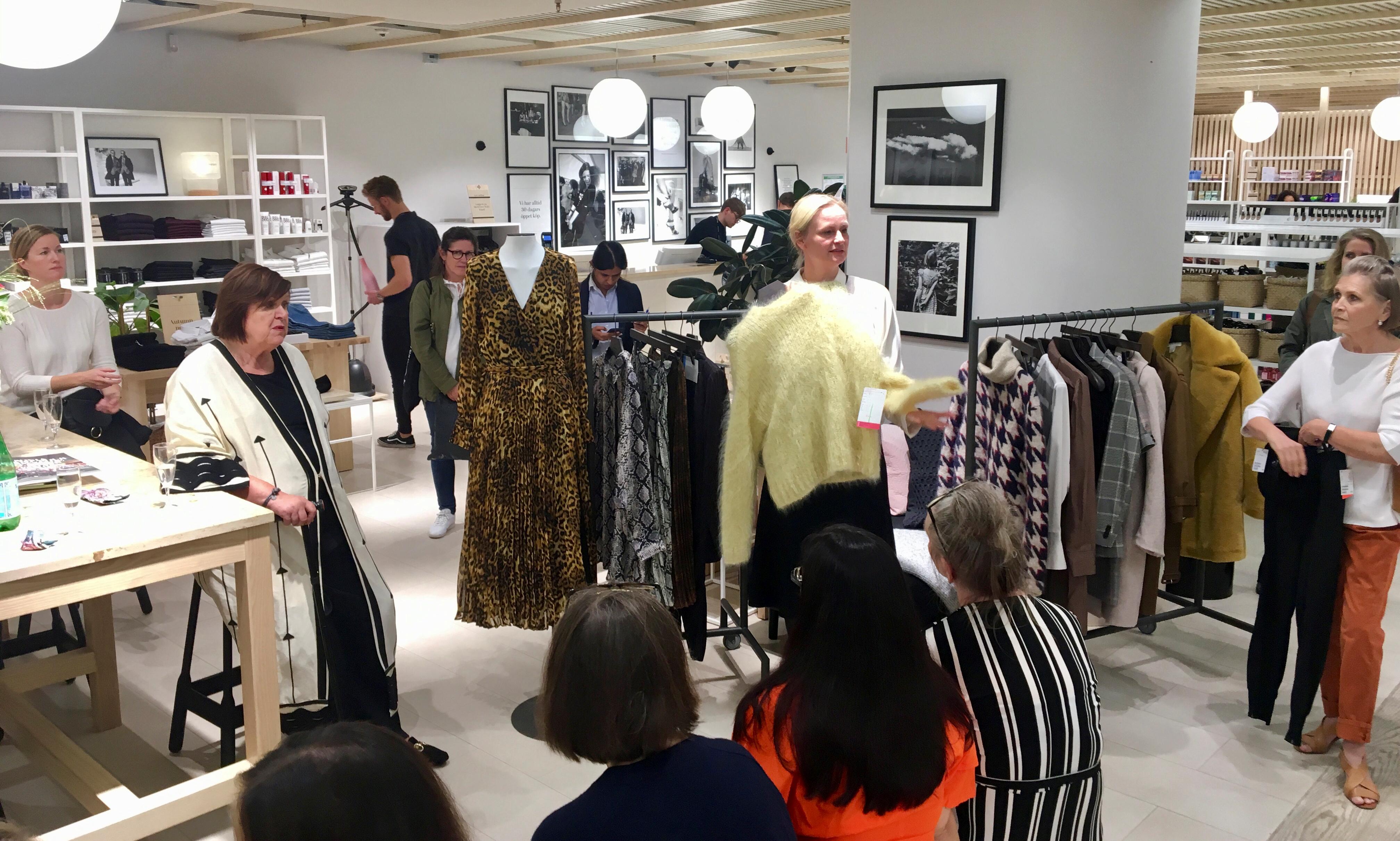 A recovery in sales in H&M’s third quarter suggests it might have stopped the rot, but analysts suspect the improvement was largely due to price cuts to shift stock, at the expense of profitability.

Full third-quarter figures are due on Sept. 27.

Majority-owned by the founding Persson family, H&M finally admitted in January it had a problem for a while with its H&M branded stores, which make up the bulk of its business.

Company executives admit they neglected the health of H&M stores as they focused on building online sales and developing eight new, mostly higher-end brands, such as COS and ARKET – even though the H&M brand accounts for over 90 percent of sales.

It was the crowds and clutter at H&M’s store in New York’s Times Square that turned off 21-year-old student Nicole Archie, who now prefers online sites such as Boohoo (BOOH.L) or Fashion Nova.

“I remember the line being so long that I went to go sit on a bench near the shoes,” she said. “There were laces and strings all over the floor and tangled. If I wanted to purchase a shoe, I wouldn’t be able to because everything was so stuck together.”

Those kinds of shortcomings allowed rivals to steal a march on H&M as customers started to look for so-called destination stores with more attractive layouts and other things to do besides shopping.

Inditex has shut smaller Zara outlets to focus on large, sleek stores in prime shopping areas that are well integrated with its website, helping to keep sales powering ahead.

(For a graphic showing H&M’s share price performance in 2018: reut.rs/2xB4cOn)

The pilot store in Stockholm shows H&M is finally getting the message.

“After talking to the customers, we’ve been wanting to create a warmer and more personal feeling,” Anna Tillberg, head of H&M’s innovation think-tank the Laboratory, which is developing the new concept.

H&M invites loyalty club members from the area to yoga classes and mingle events in a store that has been refurbished with wooden floors, lush greenery, broad aisles, a cafe corner and spacious changing rooms.

“It’s a total change. This is like a concept store. It’s much better now. There’s no garbage or plastic or packaging anywhere,” Mathilda Moncetti, 27, said at a recent event. “The interior feels like a luxury brand.”

Sitting by the in-store espresso machine, Daniel Claesson, head of business development and online at H&M, said the revamp had increased both the store’s sales and footfall. H&M declined to give figures.

“We’ve learnt loads,” he said. “Here we’ve seen proof of the results of being more relevant for the customer we have right here.”

The company said in February that it expected sales in stores open one financial year or more to return to growth in 2019. Besides the new store concept, H&M also plans to adapt ranges to local tastes in many more stores.

The company, which rents its store space, is shutting underperforming H&M stores faster than usual, sometimes swapping the budget brand for one of its better-performing ones. It has also turned some regular H&M stores into discount outlets.

But some investors fear it could all be too little too late.

Norwegian investment fund Odin Fonder odinfundmanagement.com has sold all its H&M shares, saying it was unsure Persson was the best person to steer the chain through the industry’s rapid transformation.

“We think it needs to close at least 1,000 stores, and that just as many need to be refurbished,” the fund said.