LOS ANGELES (Reuters) – A fierce, wind-driven wildfire swept through foothills and canyons along the northern edge of Los Angeles on Friday, engulfing homes, closing roads and devouring acres of dry brush and chaparral as 100,000 residents were forced to flee.

At least one death was attributed to the fire, a man who authorities said suffered a heart attack while trying to battle encroaching flames on his property rather than heeding evacuation orders.

The blaze, dubbed the Saddleridge fire, began on Thursday night and had raced across some 7,500 acres (3,035 hectares) by midday Friday, growing into the largest and most ferocious among a spate of wildfires across Southern California.

California Governor Gavin Newsom declared localized emergencies on Friday for the counties of Los Angeles and Riverside, which was dealing with a smaller blaze than the one in Los Angeles.

Water-dropping helicopters and airplane tankers loaded with flame retardant fought the Los Angeles blaze from the air as ground crews battled at close range with hand tools and bulldozers, while firefighters lugging hoses from house to house scrambled to protect threatened neighborhoods.

Their efforts were paying off. Although 31 structures were damaged or destroyed, fire officials said their crews managed to save thousands of dwellings while carving containment lines around 13 percent of the fire’s perimeter.

U.S. Representative Brad Sherman told Reuters he was among residents who fled as flames approached.

“I left a bit earlier than most because I was watching the news and the moment they posted on the internet that I was in the mandatory evacuation area, I was out,” Sherman said by mobile phone as he walked back to check on his home in the Porter Ranch suburb.

The conflagration was stoked by strong, dry Santa Ana winds blowing into Los Angeles from desert areas to the east. Those winds were moving flames at a rate of 800 acres (325 hectares) per hour at the fire’s height, city fire officials told a morning news conference.

“This is a very dynamic fire,” Fire Chief Ralph Terrazas told reporters, urging residents in harm’s way to heed evacuation orders. “Do not wait to leave.”

The cause of the blaze was under investigation.

“Don’t be fooled,” he said. “There’s a lot of potential for additional growth of this fire.”

Some 23,000 homes and around 100,000 residents were under mandatory evacuation orders from the Saddleridge fire early on Friday. Many evacuees were left to wonder whether their homes were still standing.

By Friday evening, the Los Angeles Fire Department said it was lifting evacuation orders for some areas farthest from the flames.

The community of Porter Ranch remained under mandatory evacuation orders. The upscale suburb lies adjacent to a natural gas storage field where a wellhead rupture caused a massive methane leak in 2015 that forced nearby residents from their homes on and off for months. [L3N26W3ZR]

Several freeways were closed at the outset of the blaze.

Thick clouds of smoke billowing from the blaze drifted across a wide swath of northern Los Angeles, causing air quality problems that prompted the city school district to close dozens of public schools throughout the San Fernando Valley.

Los Angeles County Fire Captain Tony Imbrenda told radio station KPCC that high winds had hampered the ability to fight the flames from the air, sometimes causing dissipation of water and fire-retardant drops before they could hit the ground.

Mountains and other areas in Los Angeles and Ventura counties were under a “red flag” alert for heightened fire danger until Saturday evening, the National Weather Service said.

Similarly strong winds in northern California prompted utility giant Pacific Gas & Electric (PG&E) to impose a precautionary shutoff of power to hundreds of thousands of homes and businesses to reduce the risk of wildfires over the past few days.

By Friday, PG&E announced it had restored power to nearly three-quarters of its customers whose power was turned off, and that about 195,000 remained without electricity.

Authorities also fought to gain the upper hand on the Sandalwood Fire in Riverside County, about 70 miles (110 km) east of the Saddleridge fire, which had scorched about 830 acres and destroyed 76 homes and other structures by Friday around the town of Calimesa. 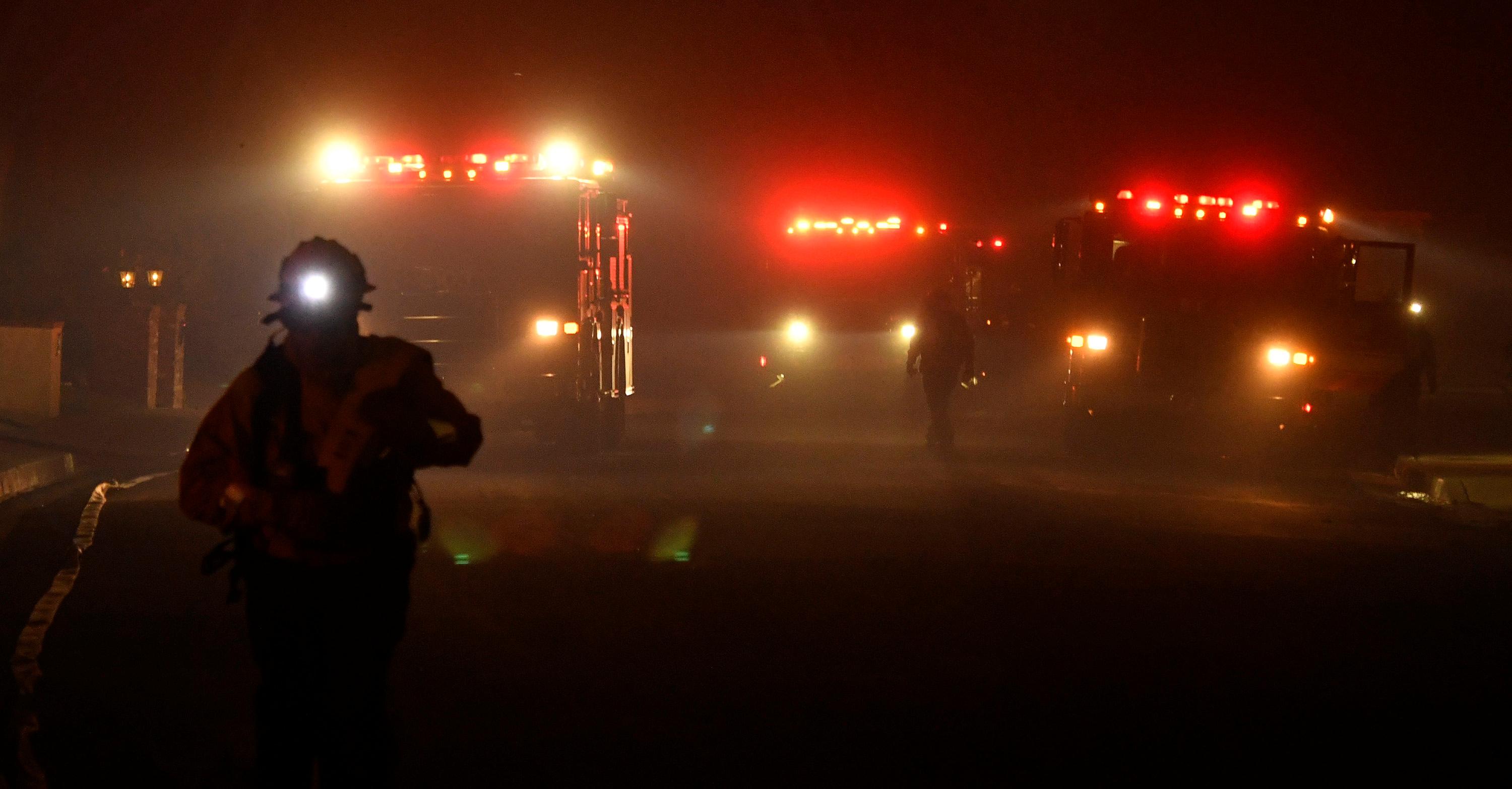 One fatality was reported, along with two people who were unaccounted for. The blaze was just 10% contained, Riverside County Fire Department (RCFD) officials said.

The Sandalwood fire erupted on Thursday afternoon when a garbage truck dumped burning trash that spread onto vegetation, the RCFD and California Department of Forestry and Fire Protection said in a statement.