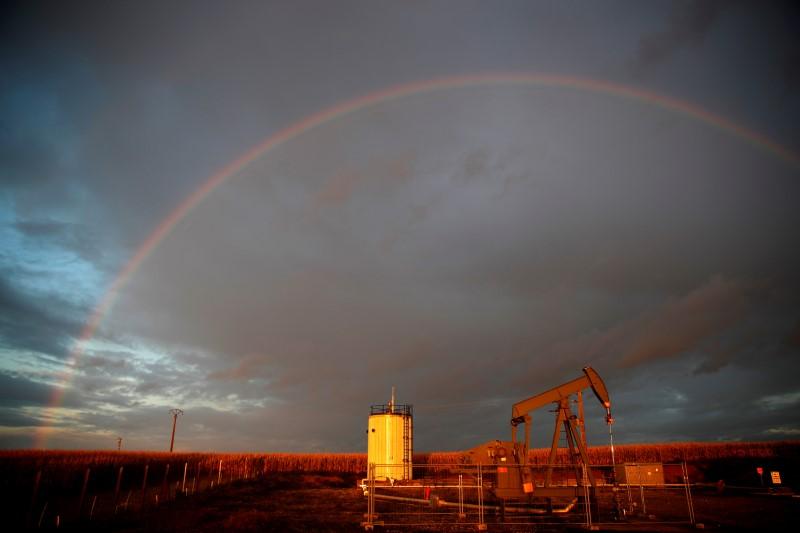 (Reuters) – After almost three barren years for investors who have poured millions into the U.S. oil sector, producers are finally opening the floodgates to a wave of share buybacks that will return money to shareholders this year.

A rainbow is seen over a pumpjack during sunset outside Scheibenhard, near Strasbourg, France, October 6, 2017. REUTERS/Christian Hartmann

U.S. oil production topped 10 million barrels per day earlier this year, approaching a record set in 1970, but until recently many investors in the shale oil revolution were still waiting for their payday. (here)

Since the beginning of year, 11 companies have promised buybacks, with six alone in the past three weeks including Devon Energy (DVN.N), Hess Corp (HES.N) and Noble Energy Inc (NBL.N). In all, companies have committed to buy back about $3.6 billion worth of shares since February.

The payouts come courtesy of a combination of higher and more stable oil prices and pressure from investors.

“There was a time when the consensus was that we’d be stuck at around $45 a barrel for oil, and obviously conditions have improved since then,” said Derek Rollingson, a portfolio manager at ICON Advisers.

“There is a disconnect between commodity prices and returns from exploration and production companies.”

Before oil started to take a downturn in 2014, energy companies had spent billions of dollars in exploration and new projects. When oil fell below $30, producers in North America sought to raise cash by selling more shares, pushing down stock prices.

Wall Street finally put its foot down last year (here), with investors demanding a shift to dividends and share buybacks. Exxon Mobil (XOM.N) was punished for ignoring the demands and focusing on its expansion plans.

Reacting to market sentiments, Hess and Devon said they would either buy back $1 billion worth of shares, or add that much to existing programs. Anadarko added a further $500 million to its $2.5 billion-share buyback program, while Noble Energy authorized a repurchase of $750 million.

For Hess, the announcement was also a way to avoid a skirmish with activist hedge fund Elliott Management ahead of nominations for its board.

Elliott, which owns more than 6 percent of Hess, had criticized the company for “continuing underperformance,” but supported the buy back program earlier this month.

U.S. shale producers have started believing they can drill more profitably as crude prices hold steady at around $60 a barrel. Propping up share prices also makes sense if they do want to raise more funds to invest over the next year.

As long as oil holds to current prices LCOc1CLc1, companies can afford to keep focusing on shareholder returns, analysts said.

“I think we’re likely at the beginning of a theme … there is a lot of room to improve in terms of equity,” ICON Advisers’ Rollingson said.