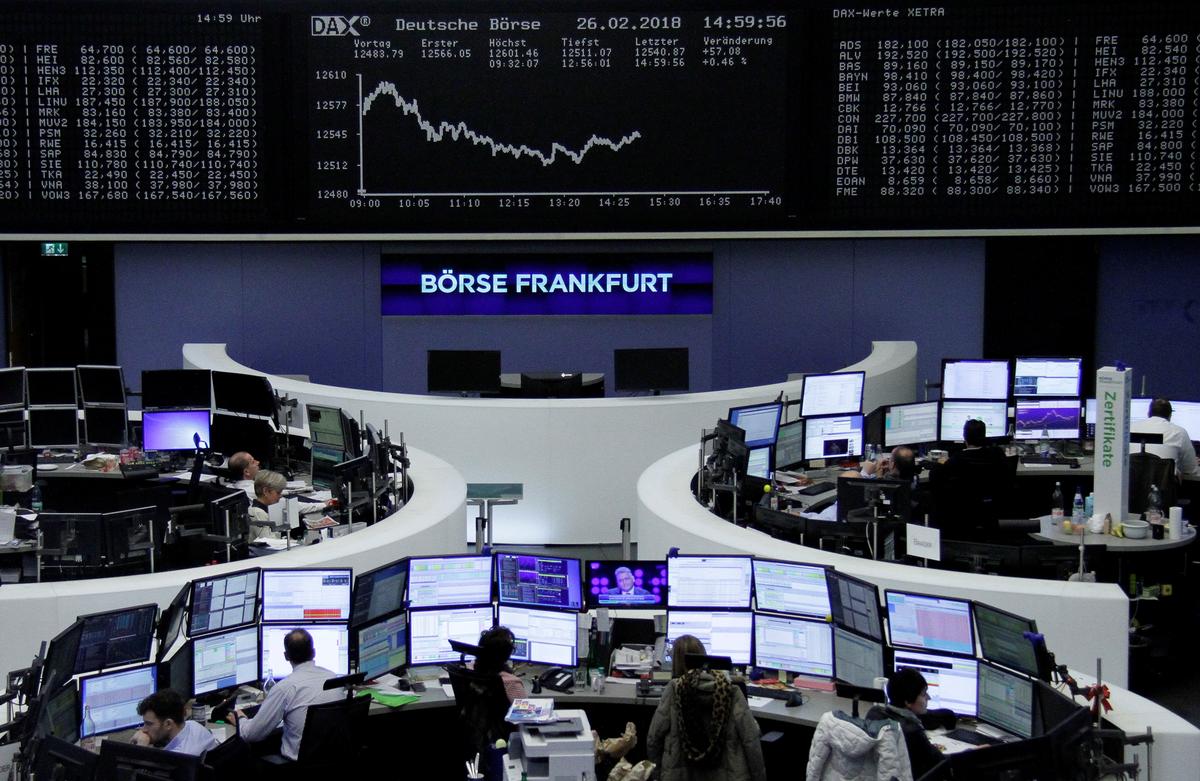 The testimony, due at 1500 GMT, will come two days after his hawkish comments ignited fears the Fed could deliver four U.S. rate rises this year instead of the three already priced in, triggering an equity sell-off and pushing up bond yields.

The U.S. dollar rose to six-week highs against a basket of currencies while the gap between short-dated U.S. and German bond yields was at its widest since 1997.

Emerging Asian and Japanese shares also fell earlier, with the latter down 1.6 percent.

Wall Street looked set for another weak open, futures signaled, after it ended February with its worst monthly performance in two years.

Fed chief Powell will deliver the second leg of his semi-annual testimony on Thursday, an opportunity to clarify comments made on Tuesday that rekindled speculation over U.S. monetary tightening this year happening faster than expected.

Powell on Tuesday vowed to prevent the economy from overheating while sticking with a plan to gradually raise interest rates.

For equity markets, the fear is that a pick-up in the pace of rate rises could crimp corporate activity and cool economic growth.

Philip Shaw, chief economist at Investec in London said Powell’s testimony was unlikely to change from the one he delivered on Tuesday, putting the focus on the question and answer session.

“He (Powell) appears to have got an easy ride from lawmakers in the sense that the technical questioning on Tuesday wasn’t too heavy,” Shaw said. “He may not have such an easy time today with the Senate Banking Committee.”

The dollar meanwhile has taken heart from the Fed chair’s comments. The dollar index rose to 90.776, a six-week high.

It has clawed back from the three-year trough of 88.253 set in mid-February, as fears of a ballooning U.S. budget deficit and worries of a possible weak-dollar policy from Washington took a toll.

The gap between short-dated borrowing costs in the United States and Germany was at its widest in over 20 years as the monetary policy outlooks for the two regions diverge.

In contrast to rising rate-hike speculation in the United States, data on Wednesday showing euro zone inflation slowed to a 14-month low in February highlighted that a rate rise from the European Central Bank remains some way off.

“In the U.S. we have at least three rate hikes this year, but in the euro zone, there was some exaggeration about where the inflation was heading so that is now being priced out and yields are moving to the downside,” said DZ Bank strategist Daniel Lenz.

That divergence in rate outlooks also weighed on the euro, which hovered at a six-week low at around $1.2182.

The dollar was little changed at 106.73 yen, having slipped from the week’s peak of 107.680 as broader risk aversion favored its Japanese peer.

U.S. crude oil futures were a touch firmer at $61.73 per barrel after sliding more than 2 percent overnight. Brent crude added 0.25 percent to $64.89 per barrel.

Reporting by Dhara Ranasinghe; Additional reporting by Shinichi Saoshiro in Tokyo and Abhinav Ramnarayan in London; Editing by Catherine Evans