(Reuters) – Microsoft Corp (MSFT.O) co-founder Paul Allen, the man who persuaded school-friend Bill Gates to drop out of Harvard to start what became the world’s biggest software company, died on Monday at the age of 65, his family said.

Allen left Microsoft in 1983, before the company became a corporate juggernaut, following a dispute with Gates, but his share of their original partnership allowed him to spend the rest of his life and billions of dollars on yachts, art, rock music, sports teams, brain research and real estate.

Allen died from complications of non-Hodgkin’s lymphoma, a type of cancer, the Allen family said in a statement.

Music-lover Allen had a list of high-profile friends in the entertainment business, including U2 singer Bono, but preferred to avoid the limelight at his compound on Mercer Island, across Lake Washington from Seattle, where he grew up.

Gates described Allen as following the Microsoft partnership with a “second act” focused on strengthening communities and in a statement said, “I am heartbroken by the passing of one of my oldest and dearest friends.”

Current Microsoft Chief Executive Satya Nadella on Monday called him a “quiet and persistent” man who changed the world.

“He is under-appreciated in Seattle,” said David Brewster, founder of local news website Crosscut.com and the Seattle Weekly newspaper. “He’s remote and reclusive. There’s too much Howard Hughes in the way he behaves for Seattle truly to appreciate a lot of the good that he does.”

Paul Gardner Allen was born in Seattle on Jan. 21, 1953, the son of a librarian father and teacher mother. He was two years older than Gates but when they met in the computer room at the exclusive Lakeside School in Seattle in 1968, they discovered a shared passion.

“In those days we were just goofing around, or so we thought,” Gates recalled in his 1985 book “The Road Ahead.”

FROM BOSTON TO ALBUQUERQUE

Allen went on to Washington State University but dropped out in 1974 to take a job with Honeywell in Boston. While there, he pestered Gates, who was studying at nearby Harvard, to quit school and join the nascent revolution in personal computing.

Gates finally agreed and in 1975 the two jointly developed BASIC software for the Altair 8800, a clunky desktop computer that cost $400 in kit form.

The pair moved to Albuquerque, New Mexico, close to the Altair’s maker, and formed a company. It was Allen’s idea to call it Micro-Soft, an amalgam of microcomputer and software. The hyphen was later dropped.

Allen was in charge of Microsoft’s technical operations for the company’s first eight years, making him one of the handful of people who created early software such as MS-DOS and Word that enabled the PC revolution and thrust Microsoft to the top.

But he had ceased to be on the cutting edge of software development by the early 1980s. He never displayed the commercial instinct of Gates, who generally is credited with powering Microsoft’s rise to ubiquity in the 1990s.

Allen left Microsoft in 1983 after falling out with Gates and his new lieutenant, Steve Ballmer, in December 1982, only months after being diagnosed with Hodgkin’s lymphoma. As he recalled in his 2011 memoir “Idea Man,” he overheard Gates and Ballmer secretly plotting to reduce his ownership stake.

“They were bemoaning my recent lack of production and discussing how they might dilute my Microsoft equity by issuing options to themselves and other shareholders,” Allen wrote. 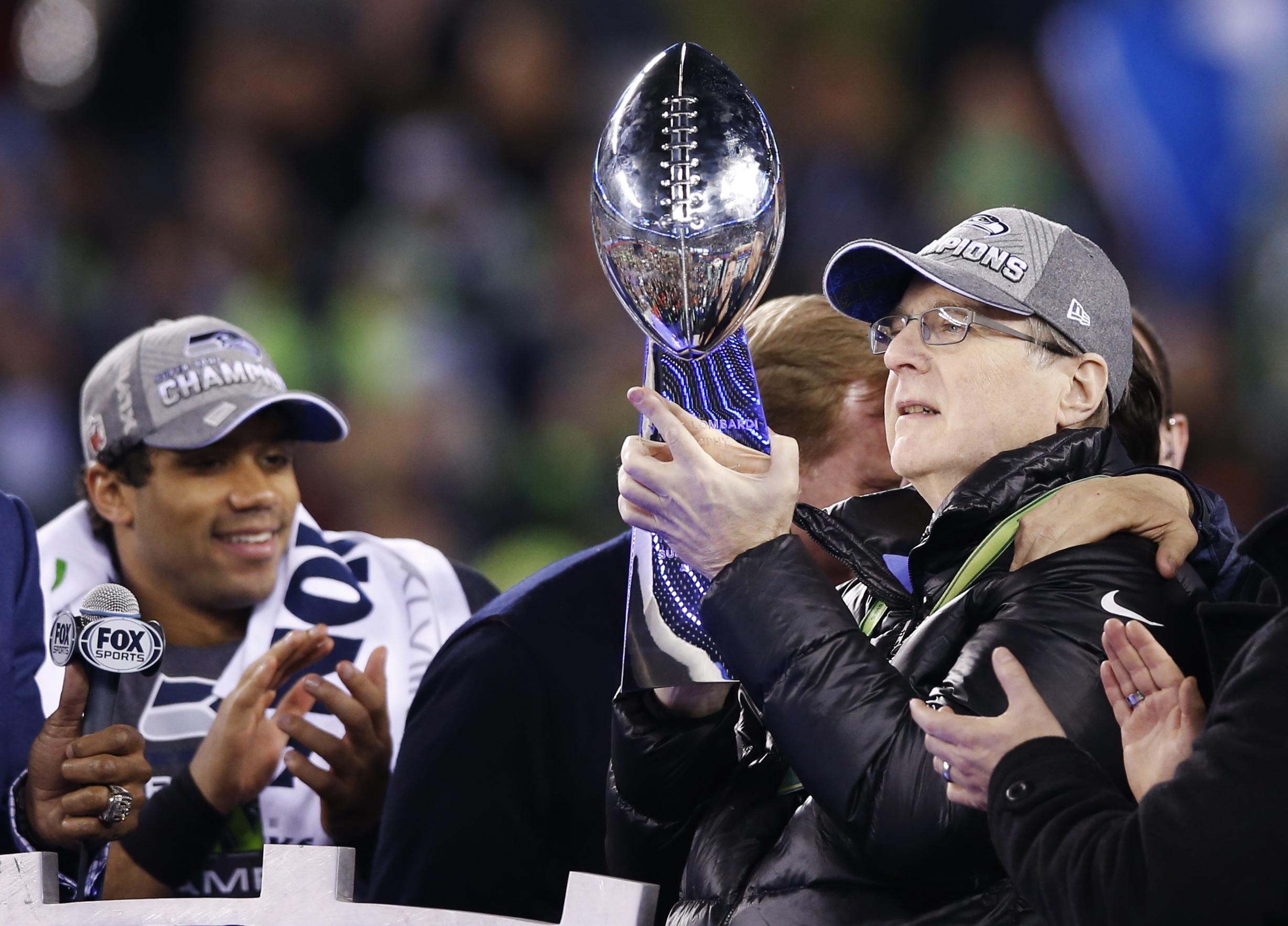 Gates and Ballmer later apologized but the damage was done and Allen left Microsoft, although he remained on the board until 2000.

Allen recovered from his cancer after radiation treatment but in 2009 was diagnosed with non-Hodgkin’s lymphoma, another form of blood cancer. He went into remission in April 2010 but the disease resurfaced in 2018.

Allen held onto his share of the company. His 28 percent stake at Microsoft’s initial public offering in 1986 instantly made him a multi-millionaire.

His wealth peaked at about $30 billion in late 1999, according to Forbes magazine, but Allen was hurt by the sharp decline in Microsoft stock after the dot.com bubble burst in 2000 and some unprofitable technology investments.

In October 2018, Forbes magazine estimated his wealth at $21.7 billion and said he was the 44th richest person in the world.

Allen, the owner of 42 U.S. patents, liked to cast himself as a technology visionary who drove Microsoft’s early success and saw the future of connected computing long before the Internet.

“I expect the personal computer to become the kind of thing that people carry with them, a companion that takes notes, does accounting, gives reminders, handles a thousand personal tasks,” Allen wrote in a column in Personal Computing magazine as far back as 1977, long before portable computers became a reality.

In the same year, he outlined an early vision of what turned out to be the Internet to Microcomputer Interface magazine.

“What I do see is a home terminal that’s connected to a centralized network by phone lines, fiber optics or some other communication system,” he said. “With that system you can perhaps put your car up for sale or look for a house in a different city or check out the price of asparagus at the nearest grocery market or check the price of a stock.”

Allen later called this sweeping idea the “wired world,” which has broadly come to fruition. He was not alone in predicting connected computing but was one of the most prominent.

Yet Allen’s technology ventures after Microsoft, which focused on areas he thought would grow with the advent of the “wired world,” were not as successful. He lost $8 billion in the cable television industry, chiefly with a bad bet on cable company Charter Communications (CHTR.O), while technology ventures he bankrolled such as Metricom, SkyPix and Interval Research were costly failures.

SPORTS TEAMS, A YACHT AND HENDRIX

He had better luck in sports and real estate. Allen bought the Portland Trail Blazers basketball team in 1988 and became a local hero in 1997 when he purchased the Seattle Seahawks football franchise after the previous owner had tried to move the team to California. The Seahawks won the Super Bowl in February 2014 and both franchises are now valued at many times what Allen paid for them.

All the while, the never-married Allen pursued myriad personal projects and pastimes. He owned one of the world’s biggest yachts, the 400-foot (122 meters) Octopus, which was the venue for many lavish parties and the base for scuba expeditions.

A rock ‘n’ roll aficionado, Allen had a band on call to jam with when he wanted, and spent more than $250 million building a museum devoted to his hero, Jimi Hendrix, which morphed into a music and science fiction exhibit designed by Frank Gehry.

He spent millions more on a collection of vintage warplanes and funded the first non-government rocket to make it into space. He also collected priceless antiquities and works by Monet, Rodin and Rothko to put in his extensive art collection.

Like Gates, Allen was a dedicated philanthropist, giving away more than $1.5 billion in his lifetime and pledging to donate more than half his wealth to charity.

Through various vehicles, Allen focused his giving on brain science, motivated by the loss of his mother to Alzheimer’s disease, along with universities and libraries.