NEW YORK (Reuters) – One of the year’s most popular events for fund managers, the Sohn Investment Conference, will be held in New York on Monday, but if history is any guide, some of the industry’s lower-profile managers will probably provide the most profitable ideas.

The best ideas of some press-shy hedge fund managers who spoke at the 2017 New York Sohn Investment Conference outperformed those of celebrity managers such as Greenlight Capital’s David Einhorn, according to a Reuters analysis.

Josh Resnick, founder of New York-based Jericho Capital Asset Management, had the best overall investment idea of the 11 featured investors who spoke last year. His, short, or bet against, Frontier Communications Corp gained 61 percent since it was announced on May 8 of last year.

Larry Robbins, the billionaire manager of Glenview Capital Management, had the next-best performance, with approximately 33 percent gains in his bullish position in DXC Technology Co.

The 2018 Sohn conference, which will take place at the David Geffen Hall at Lincoln Center, will include presentations by Glen Kacher of Light Street, Chamath Palihapitiya of Social Capital and Li Ran of Half Sky Capital.

Returns from picks of higher-profile investors at Sohn last year were mixed and Einhorn’s Greenlight is among those nursing heavy losses.

Einhorn, who came to fame after his call to short Lehman Brothers before the 2008 financial crisis, last year recommended shorting Core Laboratories NV, a losing position as the stock gained 7.3 percent between May 8 and Thursday.

In the first quarter alone, Greenlight was down 14 percent, Einhorn wrote in a letter to clients dated April 3. Through a spokesman, Greenlight declined to comment for this story. 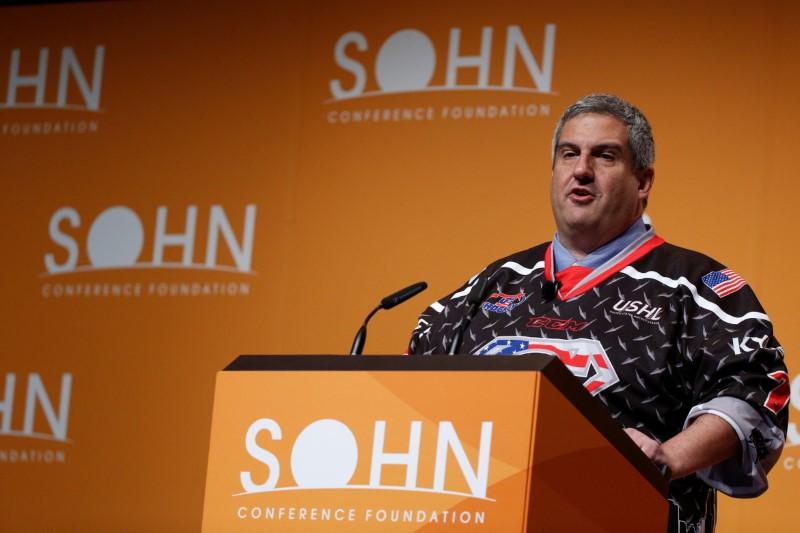 Hedge fund managers, unlike many mutual fund managers, can bet a stock will fall and thus promise to make money in tumbling markets, but that strategy has not worked well for a variety of managers this year even though the U.S stock market has suffered from fears of central bank interest rate rises and the fallout of the imposition of import tariffs by President Trump.

Last year, Bill Ackman, a long-time supporter of the conference, pitched real estate company Howard Hughes Corporation, which he’s owned for some time. In 2017, the pick was a winner for his $8 billion Pershing Square Capital Management but Ackman’s firm still lost money. The stock climbed 11 percent in the last 52 weeks. Ackman will not be presenting this year.

John Khoury, who runs $2.7 billion Long Pond Capital, will be back at the Sohn conference this year after having pitched Hyatt Hotels Corp in 2016. In the last 52 weeks the stock price has climbed 42 percent.

As hedge fund returns have stalled in the past year, investors have protested by pulling cash out. At the same time, some are giving smaller fund managers a chance, given academic research that smaller firms often outperform their bigger rivals.

DoubleLine’s Jeffrey Gundlach, known as the “Bond King,” recommended going long emerging market stocks and shorting the benchmark U.S. S&P 500 stock index and enhancing the return through leverage. Including borrowing costs, the trade returned over 13 percent through Thursday. “This is a good result and a great risk-adjusted result given the low risk nature of pair trades,” Gundlach told Reuters. The broad S&P 500 index gained approximately 12.2 percent before dividends over the same time.

Resnick, who presented last year’s best performing idea, will not be among those presenting. The firm released a March 12 public letter calling on VMWare Inc to end talks with Dell Technologies over a potential reverse merger, arguing that it would “likely lead to a significant destruction of shareholder value.”

Shares of VMWare are up 11.4 percent for the week after reports that Dell may be close to walking away from talks amid concerns that the merger plan would prompt in-demand employees to defect to rivals that were not saddled with Dell’s legacy hardware business.