BODO, Nigeria (Reuters) – Royal Dutch Shell wants to reweight its footprint in Nigeria to focus on oil and gas fields far offshore, away from the theft, spills, corruption and unrest that have plagued the West African country’s onshore industry for decades.

An overview of the Niger delta where signs of oil spills can be seen in the water in Port Harcourt, Nigeria August 1, 2018. Picture taken August 1, 2018. REUTERS/Ron Bousso

But for the company that pioneered Nigeria’s oil industry in the 1950s, the Niger Delta remains as important — and problematic — as ever.

While Shell has cut onshore oil production and sold some onshore assets, it continues to invest in others. In fact, onshore production has risen in recent years as a share of Shell’s output in Nigeria, an analysis of company data over the past decade shows.

Much of the increase comes from less polluting gas, used mainly in power generation, which Shell thinks will be key to the transition to lower carbon energy. Gas made up 70 percent of onshore production in 2017, up from 47 percent in 2008.

The company still controls thousands of kilometers of pipelines connecting inland fields to coastal terminals through its subsidiary, Shell Petroleum Development Co of Nigeria (SPDC), however.

So while SPDC has cut oil production in the Delta by 70 percent since 2011, when it first started reporting data on spills, the incidence of spills and theft from pipelines has fallen at a much lower rate and has picked up again recently, the data shows.

“We are too big just to see ourselves as ‘there is a problem and we have to run’. That is not what we are thinking of doing,” he told reporters on a media trip to the country in July. “But at the same time we don’t want to spread our footprint.”

Two pipeline spills in 2008 in the small community of Bodo in Ogoniland are emblematic of the problems in the Delta, a vast maze of creeks and mangrove swamps criss-crossed by pipelines and blighted by poverty and oil-fueled violence.

On a speedboat trip to the site of a clean-up operation launched by Shell last year, a makeshift oil refinery stood idle on a charred landing. The ground was soaked with oil, the air heavy with petrol fumes and slicks glistened in the water nearby. There were few signs of birds or fish.

So far this year, 85 crude spills have been recorded, already higher than the previous two years. In 2016, militant attacks pushed the volume of spills to more than 30,000 barrels, a high since 2011.

Despite all the problems and costs, however, Nigerian onshore operations generate billions of dollars annually.

Shell does not break down profits by country, but a report on payments to governments that the company publishes annually showed it paid around $1.1 billion in royalties, taxes and fees to the Nigerian government in 2017.

That means Shell earned more than $4 billion from oil and gas production in Nigeria in 2017 – around 7 percent of its total global output.

A Shell spokesman declined to comment on the specifics of Reuters’ data analysis.

Shell has shown it can shut down if it is not making money. It stopped producing oil completely in Iraq last year after half a century in the country, although it retains substantial gas operations.

“It’s hard to think Shell would stay put onshore and weather all the problems if the assets didn’t offer decent returns,” said Aaron Sayne, a financial crime lawyer working at the Natural Resource Governance Institute (NRGI). “To some extent, the onshore must still be worth the trouble.”

Shell remains central to Nigeria’s economy and society. SPDC – operated by Shell with a 30 percent stake while the Nigerian National Petroleum Co has 55 percent, France’s Total has 10 percent and Italy’s Eni has 5 percent – is the country’s largest oil joint venture, employing thousands.

The Anglo-Dutch giant’s operations drew unwelcome attention in the early 1990s when residents of the Delta’s Ogoni region called for fairer distribution of oil wealth and compensation for spills. The government cracked down and in 1995 executed nine protest leaders, including prominent writer Ken Saro-Wiwa, prompting Shell to end production in the area forever.

It retained control of the Trans-Niger Pipeline, however, and nearly a quarter of a century later, little seems to have changed on the ground.

In 2015 Shell accepted responsibility for operational faults that caused the 2008 spills that dumped tens of thousands of oil barrels into creeks around Bodo, and paid a settlement of 55 million pounds to villagers.

Dozens of spills since, including one by a barge carrying stolen oil that sunk in July, are frustrating remediation efforts, clean-up officials said.

“You clean it up, you walk away, somebody goes back there and does the same thing. It’s like going around in circles,” said Ogonnaya Iroakasi, Ogoni restoration project supervisor and an SPDC member.

Around 80 percent of the spills are a result of sabotage, Shell data shows.

Shell has taken a number of steps to improve the situation in the area, including training youth to start up businesses and funding local community patrols, campaigns to raise local awareness and even a local radio station.

But critics say it is not enough. 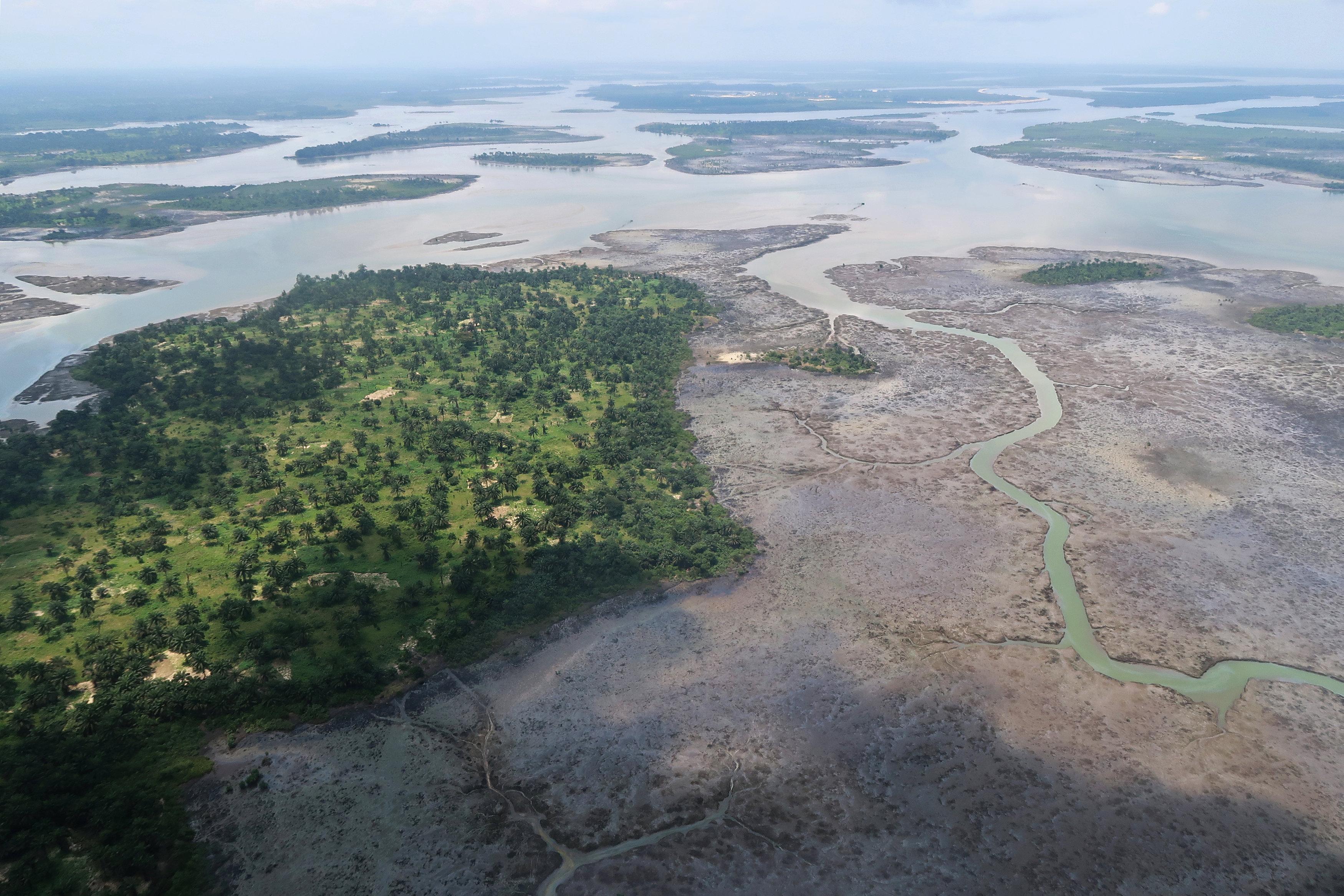 “I am not minimizing the challenge of re-pollution but Shell are not doing enough to solve it,” said Daniel Leader, the Bodo community’s lead UK lawyer. “The pipelines are not equipped with the most basic leak detection technology and Shell is simply not present on the ground in these communities.”

Local residents are frustrated as the slow process stops many from fishing, one of the main sources of income. Much of the anger is focused on Shell but Eni has also struggled to cope in recent years. Since starting to report data to authorities in 2014, the Italian company has recorded more spills than Shell, according to Amnesty International.

“Please, don’t give up on us … I hope that you guys here can force Shell to do the right thing,” Michael Porobunu, chairman of Gokana council of chiefs, told the clean-up crew and reporters on his porch.

SPDC has sold 10 of the 27 field licenses in the Delta it held in 2010, mostly to local companies. It has applied to renew the remaining licenses, which expire next year.

The divestments are a reminder of another cost of doing business in Nigeria – corruption. Shell has filed a criminal complaint against a former senior employee over suspected bribes in the $390 million sale of oil mining license 42 to local firm Neconde in 2011.

Offshore operations are an attractive alternative to the Delta in many ways. The Bonga field 120 km (75 miles) off the coast is one of Shell’s prized assets since starting up in 2005.

The giant tanker, with a drilling platform that pumps 225,000 barrels of oil and 210 million cubic feet of gas per day from a field one km below, won the company’s “asset of the year award” in 2016 for its safety and reliability.

Many risks remain. In 2016, the Trans-Forcados pipeline was shut down for months after militants detonated a bomb at its sub-sea section. Shell and Eni face bribery allegations in a Milan court over the 2011 purchase of an offshore license. Drilling offshore is also more expensive and technically complex.

Shell and its partners will decide next year on whether to develop a new offshore field, Bonga Southwest.

“Such an investment will reopen the window for the next wave of investment in deep water Nigeria,” Bayo Ojulari, managing director of Shell Nigeria Exploration and Production Company, said in Lagos.