LONDON (Reuters) – Hundreds of thousands of holidaymakers were stranded on Monday by the collapse of the world’s oldest travel firm Thomas Cook (TCG.L), sparking the largest peacetime repatriation effort in British history.

The liquidation marks the end of a British company that started in 1841 running local rail excursions and grew to pioneer the family package holiday.

Running hotels, resorts and airlines for 19 million people a year, it has around 600,000 people abroad and will need the help of governments and insurance firms to bring them home from places as far afield as Cancun, Cuba and Cyprus.

Thomas Cook’s demise, announced in the early hours of Monday after it failed to secure a deal with creditors or a government bailout, sparked alarm at hotels where some customers have been asked to pay their bills anew by out-of-pocket resort owners.

“I’m not going to pay for my holiday again,” Englishman David Midson told Reuters, trying to find information at the front desk of a hotel in Roda, Corfu. “I wish I had brought a driving license, because I can’t get a taxi (to the airport).”

As well as its 21,000 employees, the company’s fall hit global booking websites, credit card companies, travel firms using its airlines and British high streets where its travel agents were forced to shut. Major holiday destinations including Turkey and Greece also warned their hoteliers would suffer.

Tour operators selling customers transport, accommodation and excursions in a single package have been struggling for years due to the rise of budget airlines and cheap online competition from the likes of Airbnb.

Some have carved out a niche in specialist trips such as safaris. But Thomas Cook struggled to adapt due in part to a $2.1 billion debt pile built up over a series of ill-fated deals. It had to sell three million holidays a year just to cover interest payments.

The company had agreed a 900 million pound rescue package with its banks and largest shareholder, China’s Fosun (1992.HK), but lenders asked for an additional 200 million pounds to keep it operating through the winter.

In desperate meetings over the weekend, it failed to secure more funds, with the British government also refusing a bailout, judging it was not a good long-term bet.

Second largest shareholder Neset Kockar, a Turkish businessman, said the company would now be sold as a whole or in parts.

Prime Minister Boris Johnson pledged to get stranded British travelers home, another headache for his government as it tries to negotiate a fiendishly complicated withdrawal from the European Union.

“It is a very difficult situation and obviously our thoughts are very much with the customers of Thomas Cook,” Johnson told reporters on a plane as he headed to the U.N. General Assembly in New York. “We will do our level best to get them home.”

The UK’s Civil Aviation Authority (CAA) said it had a fleet of planes ready to bring home the more than 150,000 British customers over the next two weeks.

Thomas Cook’s German airline subsidiary, Condor, said there were 240,000 people booked on its flights awaiting a return home. Its flights are still operating for now, and it has asked the German government for a bridging loan. In Germany, insurance companies coordinate any repatriation.

There are around 50,000 holidaymakers affected in Greece, and around 35,000 from Nordic countries using Thomas Cook.

“I would like to apologize to our millions of customers, and thousands of employees, suppliers and partners who have supported us for many years,” Thomas Cook Chief Executive Peter Fankhauser said.

At Manchester Airport in northern England, all Thomas Cook branding was removed from check-in desks.

“Love my job so much, don’t want it to end,” Kia Dawn Hayward, a member of the company’s cabin crew, said on Twitter.

The collapse could provide a boost, however, to major rival TUI (TUIGn.DE), whose shares surged more than 10% on Monday, and to Europe’s overcrowded airline sector.

Founded by a Baptist preacher who wanted to steer workers away from sin, Thomas Cook went on to forge the foundations of modern mass tourism.

On Monday, though, its own 178 year journey came to an end.

UK customers were told not to travel to airports until they had been informed via a special website – thomascook.caa.co.uk – that they were booked on a return chartered flight.

The website showed some flights were returning to different British airports, but many were only running a few hours behind the original Thomas Cook scheduled flight and the system appeared to be working well. 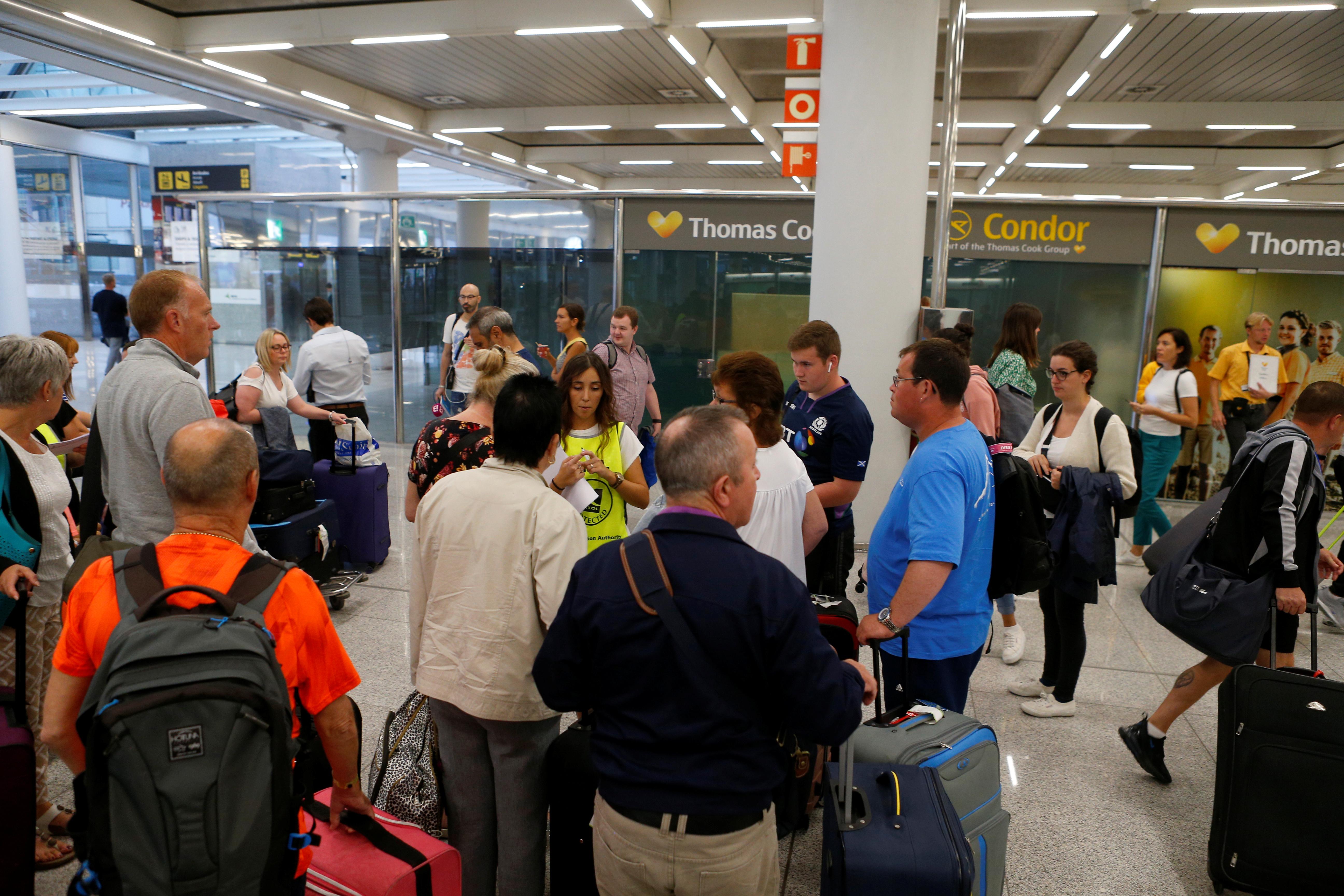 The British regulator is also contacting hotels hosting Thomas Cook customers to tell them they will be paid by the government, through an insurance scheme. That was after some customers were briefly held in a hotel in Tunisia when staff asked for additional payments to be made.

But top destinations such as Spain, Greece, Turkey and the Canary Islands, where some hotels work exclusively with Thomas Cook, warned of a likely hit to their tourism industries.

“This is an earthquake on a scale of seven, now we are waiting for the tsunami,” Michalis Vlatakis, president of the Association of Travel Agents of Crete, told the Athens News Agency.($1 = 0.8016 pounds)