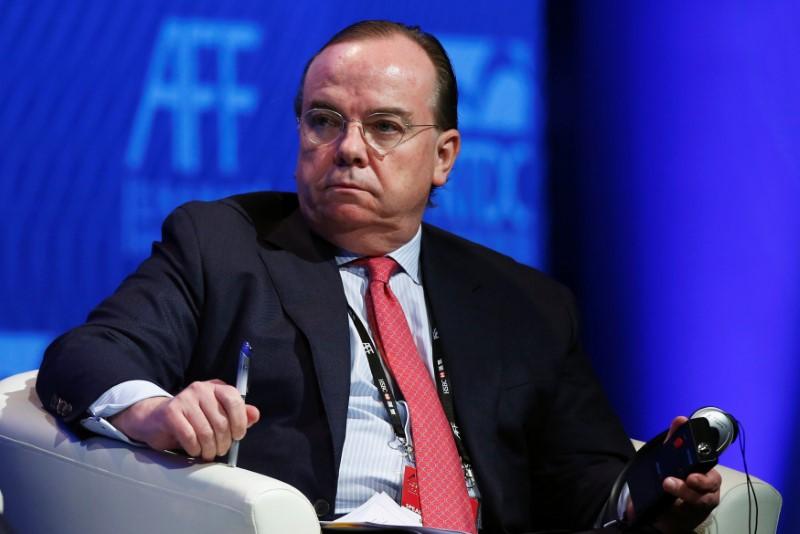 HONG KONG/LONDON (Reuters) – HSBC Holdings (HSBA.L) reported a smaller than expected rise in annual profits and unveiled plans to raise up to $7 billion to bolster its capital, as CEO Stuart Gulliver hands over to a new leadership team on Tuesday.

Gulliver is stepping down after more than seven years at the helm of Europe’s biggest bank by market value, which has been through a painful restructuring that has cost thousands of jobs. But now, coupled with a more benign market environment, the overhaul is starting to pay off.

“In my own view my performance has been satisfactory,” Gulliver said of his tenure, citing the bank’s steady flow of dividends and the restructuring he pushed through.

HSBC’s profit before tax was $17.2 billion for 2017, which compared with $7.1 billion the year before but came in below the $19.7 billion average estimate of 17 analysts polled by Thomson Reuters.

HSBC shares fell as much as 4.4 percent in London by 0905 GMT, as investors registered the profit performance and disappointment over the absence of a share buyback.

“Nothing outstanding, more steady as we go,” Hugh Young, head of Asia at Aberdeen Standard, a top-ten investor told Reuters, describing the results as “respectable”.

“The soon-to-be old team has done a good job tidying up and refocusing, whilst still leaving plenty of scope for the new team,” he added, flagging significant remaining upside for investors as the bank moves toward a targeted 10 percent return on equity.

The analysts’ earnings estimates did not all take into account a $1.3 billion writedown for 2017 that HSBC took, triggered by cuts in the U.S. corporate tax rate which meant banks had to book losses on deferred tax assets they built up during loss-making times.

The bank’s year-ago profit figure reflected a $3.2 billion impairment of goodwill in the global private banking business in Europe and the impact of its sale of operations in Brazil.

HSBC said it was planning additional tier 1 capital issuance of between $5 billion and $7 billion during the first half of 2018, and that it would undertake share buybacks “as and when appropriate.”

HSBC veteran John Flint, who is taking over from Gulliver, is charged with steering HSBC back to growth and will likely look to Asia, where HSBC made over 75 percent of its profits in 2017.

The bank plans to push on with a strategy of investing in China’s southern Pearl River Delta region.

“We’re 2,500 people at the end of last year, we would continue to invest and add headcount … the opportunity for this organization is very compelling,” Flint, who has been with the bank since 1989, told Reuters.

Those growth plans should benefit from a more favorable interest rate environment for the bank’s deposit-heavy franchise than Gulliver enjoyed.

Rising interest rates helped the bank to increase revenues in its retail division by 9 percent in 2017, particularly from growing deposits and charging higher spreads in its second home market of Hong Kong.

“If you want to play global rising rates, I think HSBC is the best option; you’ve got exposure to Asia, America and the UK,” said another investor in the bank.

HSBC grew revenues in its investment banking division by a more modest 3 percent, a relatively strong performance given the subdued market environment throughout 2017 that hammered banks’ bond trading income in particular.

The bank reported a $218 million increase in bad loan charges in the fourth quarter compared with the previous period, which it blamed on ‘two individual corporate exposures in Europe’.

Flint said he would update investors with his thoughts on where to take the bank’s strategy before it reports half-year results in June.

That could include the results of a review into HSBC’s underperforming U.S. business which has long suffered from a lack of scale and the after-effects of the bank’s disastrous acquisition of Household International in 2003.

“We are doing a piece of work around the U.S. business at the moment, I don’t want to prejudge any conclusions,” Flint said.