WASHINGTON (Reuters) – Warehouse employees last month staged a walkout in Michigan to demand safer working conditions at their facility. So did workers in New York, Illinois and Minnesota.

Former Amazon employee, Christian Smalls, stands with fellow demonstrators during a protest outside of an Amazon warehouse as the outbreak of the coronavirus disease (COVID-19) continues in the Staten Island borough of New York U.S., May 1, 2020. REUTERS/Lucas Jackson

These and other Amazon.com Inc employees across the country are seizing on the coronavirus to demand the world’s largest online retailer offer more paid sick time and temporarily shut warehouses with infections for deep cleaning.

Employees in at least 11 states this year have voiced their concerns and staged actions to highlight a variety of purported workplace deficiencies, allegations the company has denied.

Supporting these Amazon workers are labor groups and unions eager to penetrate the Seattle-based behemoth after years of failed attempts to unionize its operations.

Reuters spoke with 16 unions and labor groups targeting Amazon. They included established organizations such as the American Federation of Labor and Congress of Industrial Organizations (AFL-CIO), the United Food & Commercial Workers International Union (UFCW) and the Retail, Wholesale and Department Store Union (RWDSU), as well as newer worker advocacy groups like Warehouse Workers for Justice and Athena, a coalition of labor and social justice groups that have criticized Amazon’s business practices.

Most unions acknowledged their long odds at organizing Amazon using traditional tactics such as holding meetings and gauging interest. Legal hurdles to unionizing the company’s workplaces and mounting elections are steep. For now, many groups said, they are showing workers how to harness public opinion to shame Amazon into granting concessions.

The strategy proved effective in the national “Fight for $15” campaign to raise the minimum wage. Labor organizations in recent years helped retail and fast-food workers stage highly publicized protests and social media campaigns to draw attention to their modest pay at a time when the economy was booming.

Cities and states including Seattle, San Francisco, California, Arkansas and Missouri raised their minimum wages as did some large U.S. employers, including Amazon, which attributed its pay hikes to a tight labor market as well as pressure from lawmakers and labor groups.

“We expect that there will be more push for unionization when we get to the other side of this,” said Stuart Applebaum, president of RWDSU.

Amazon spokeswoman Rachael Lighty said Amazon already offers what these groups are requesting: $15 per hour or more to start, health benefits and opportunities for career growth.

“We encourage anyone interested in the facts to compare our overall pay and benefits, as well as our speed in managing this crisis, to other retailers and major employers across the country,” she said.

Central to the organizing effort, union officials said, is fear among some frontline Amazon workers over the spread of coronavirus in the company’s warehouses.

At least 800 workers in Amazon’s 519 U.S. distribution facilities have tested positive for COVID-19, based on internal company figures compiled by Jana Jumpp, an Amazon warehouse employee in Indiana, who shared the numbers with Reuters. Amazon sends text messages and automated calls to employees alerting them to positive cases in their facilities. Jumpp aggregates cases mentioned in messages sent to her by Amazon workers around the country.

Jumpp said the informal process she has developed likely misses cases. She and other employees said Amazon does not share a running tally of cases at each facility or provide a nationwide count.

“We have no idea how many people are actually sick, not tested or out on quarantine,” Jumpp said on a recent media call organized by Athena, the labor coalition.

At least six Amazon workers have died of COVID-19, which the company confirmed publicly after each incident.

Amazon’s Lighty would not disclose to Reuters the total number of Amazon employees who have tested positive for coronavirus in the United States. She said the company’s efforts to quarantine infected workers are helping to slow the spread, and rates of infection “are at or below the communities we’re operating in at almost all of our facilities.” Lighty did not provide data to support that claim.

A majority of Amazon employees are showing up at work and the company “objects to the irresponsible actions of labor groups and others in spreading misinformation and making false claims about Amazon,” she said.

Lighty said employee health and safety is the company’s top priority. Amazon will spend more than $800 million in the first half of the year on COVID-19 safety measures, she said.

Amazon over the past decade has eviscerated brick-and-mortar retail competitors, some of them unionized, while successfully fending off several attempts by its own employees to organize. With shutdowns now battering Main Street, Amazon is poised to emerge from the COVID-19 crisis stronger than ever.

The company reported record first-quarter sales of $75.5 billion, up 26% from the same period a year ago, as customers sheltering in place have relied on its services and its stock price has risen 35% since the start of the year.

Amazon had nearly 600,000 U.S. employees in 2019, according to its latest annual report, making it one of the largest employers in the country.

Over 33 million U.S. workers have filed for unemployment benefits in recent weeks, strengthening the hand of employers at a time of mass unemployment. Still, some labor experts said coronavirus presents unions with their best shot in decades to make inroads at Amazon.

“Justice issues and safety at work tend to be the most powerful arguments in organizing,” said Alex Colvin, a labor relations professor at Cornell University. “They’re the strongest reason for workers to want representation.”

He said unions have resorted to public relations as a tool to pressure companies as worker protections such as “collective bargaining and employment rights enforcement have weakened.”

Amazon has resisted unionization within its workforce since its founding in 1994. It defeated unionizing efforts in Seattle in 2000 and in Delaware in 2014 by a wide margin.

In recent weeks it has fired at least four workers in three states who had publicly criticized the company and were involved in organizing.

Lighty said Amazon has “zero tolerance” for retaliation. These workers were not terminated for talking publicly about working conditions or safety, but for violating policies such as physical distancing, she said.

Among those sacked was Emily Cunningham, a Seattle-based activist with Amazon Employees for Climate Justice, who gained prominence for pushing the company to do more to fight global warming. She had recently circulated a petition calling for measures such as improved sick leave and urged all employees to agree on a day in April to call in sick to protest warehouse working conditions.

“There is a lot of frustration on how Amazon is handling the issue of workplace safety,” Cunningham said. She said she has been in touch with the AFL-CIO about the sickout, and a local affiliate of the union called MLK Labor has offered support to continue the fight on working conditions. MLK Labor confirmed it is working with employees that Amazon fired in Seattle.

The AFL-CIO’s secretary treasurer, Elizabeth Shuler, said the union is using the pandemic to galvanize Amazon workers at company headquarters and enlist support from elected officials. Amazon had over 53,000 employees in Seattle in 2019.

“Amazon’s backyard is Seattle, and that’s a major focus for us in terms of how to take the energy, the courage, the activism that we are already seeing there and build that into a real movement,” she said.

Amazon’s Lighty said the company has listened to complaints and implemented over 150 measures to keep workers safe.

The company is also running television advertisements thanking warehouse workers. Amazon founder Jeff Bezos in April showed up at a Texas distribution center and met workers to show his support.

But a steady rise in the number of infections at warehouses has spurred more protests.

Amazon worker Mario Crippen led an April 1 walkout at a Michigan warehouse to protest what he said was a lack of transparency from the company about the number of infections. He said about 40 workers participated in that action at the facility in Romulus, about 24 miles southwest of Detroit.

Helping Crippen was labor nonprofit United for Respect, which coached him on how to gain media attention without getting fired and use social media to gather more supporters. The group also offered legal help from attorneys if he was terminated.

Crippen, 26, whose job is to stow products at the warehouse, told Reuters he felt as if “somebody had my back.” He said at least 25 workers at the Romulus warehouse have tested positive, according to figures compiled by employees at the site. Crippen said some workers want the facility shut down for cleaning, and plan to continue protesting working conditions while exploring the idea of working closely with labor groups and unions in the future.

Amazon spokeswoman Lighty did not comment about the Romulus protest, the number of cases at the site or the company’s decision to not shut down the facility. She said Amazon’s decision to handle the closure of a building for deep cleaning depends on several factors, including consulting with health authorities and medical experts.

A spokeswoman for the Michigan Department of Labor said the Michigan Occupational Safety and Health Administration (MIOSHA), received employee complaints about the Romulus site and sent a letter to Amazon listing steps the company “could take to correct the hazards.” She and MIOSHA would not provide more information.

Lighty did not comment on the details in the letter.

Some labor organizers are instructing workers on how to file such safety complaints. They are also using Facebook Live, Instagram posts, Telegram chats and WhatsApp messages to share other tactics with Amazon employees.

At Whole Foods, an upscale supermarket chain owned by Amazon, several current and former employees have been using Telegram to rally coworkers across the country to agitate for expanded paid sick leave and temporary shutdown of stores with confirmed COVID-19 cases.

“First step is to ask what will you do if our store is tested positive? Then form a committee. Plan actions. Document. Call the government,” wrote one of the workers, who confirmed sending the message and discussed the strategy with Reuters on condition of anonymity. The employee said the group has doubled to 400 members since the pandemic began. Reuters could not independently confirm the growth in membership. 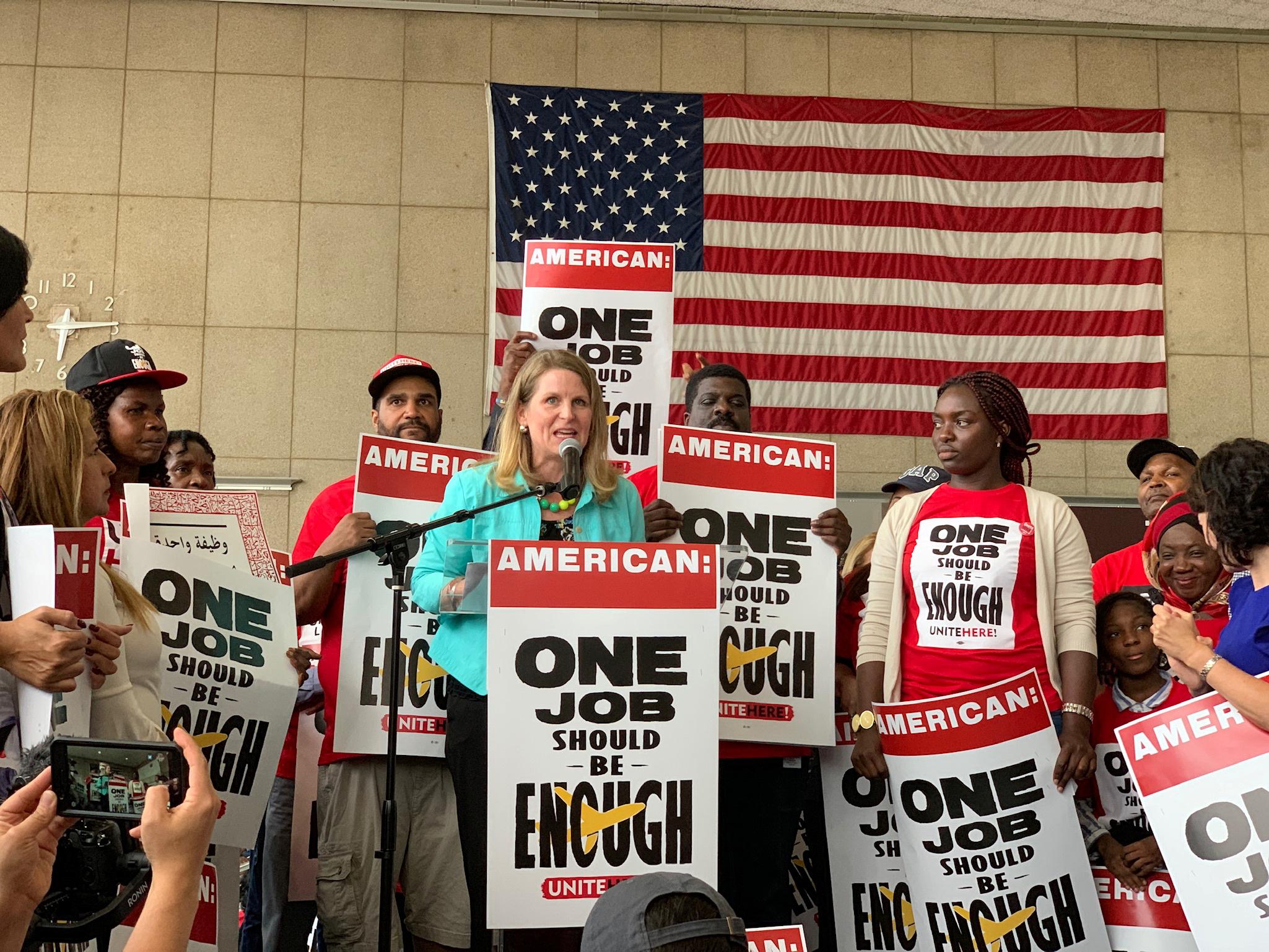 This worker and fellow organizers are collaborating with the United Food and Commercial Workers International Union, and are working under the name “Whole Worker’s National Organizing Committee.”

UFCW President Marc Perrone said the union is currently not focusing on the traditional playbook of getting employees to sign cards and become members.

“Right now …it is about showing workers value and what we can do for them,” he said.