His company, The Machhoffs, has halted U.S. projects worth up to $30 million and may move some operations overseas. Investing in domestic operations now would be “ludicrous” as China and others retaliate against U.S. agricultural goods, Maschhoff said from the firm’s Carlyle, Illinois headquarters.

Across the globe, Chinese pig farmer Xie Yingqiang sent most of his 1,000-pig herd to slaughter in May to limit losses after Chinese tariffs on U.S. soybeans hiked feed prices and left him unable to cover his costs.

“It did not really make sense to keep raising them,” said Xie, from eastern Jiangsu province.

The dueling salvos of the U.S.-China trade war are landing particularly hard on the pork industries of both nations – and spraying shrapnel that has damaged other major pork exporters such as Brazil, Canada and top European producers. In contrast to many industries that trade war has divided into winners and losers, the world’s pork farmers and processors are almost universally shedding profits and jobs from a crippling combination of rising feed costs and sinking pig prices.

The key reason: The trade war came at precisely the wrong time, after a worldwide expansion to record pork production levels on the expectation of rising meat demand and low feed prices from a global grains glut.

In the United States, meat companies such as Seaboard Triumph Foods (SEB.A) and Prestage Farms have spent hundreds of millions of dollars boosting U.S. slaughter capacity by more than 10 percent from three years ago to nearly half a million hogs daily.

U.S. pork faces retaliatory duties of 62 percent in China and up to 20 percent in Mexico, slashing demand from two top U.S. pork export markets and contributing to a mountain of unsold meat in cold storage.

The White House did not respond to requests for comment.

The USDA said in a statement that pork producers soymeal costs have declined because of a surplus of domestic soybeans that China is no longer buying. The Trump administration is working to increase opportunities for U.S. agriculture with the European Union, Japan and the United Kingdom, the agency said.

In China, tariffs on U.S. soybeans and an outbreak of African swine flu have driven farmers to send hogs for an early slaughter, exacerbating a glut that followed the rapid expansion of more efficient, large-scale farms in recent years.

Higher domestic supply and rising imports from other suppliers, such as Spain and Brazil, has compensated for the slide in U.S. pork imports. But an African swine fever outbreak this year has added to the problems of China’s pork producers. More than 40 cases have been reported in 13 provinces so far, and restrictions on hog transportation to control the disease have resulted in a glut in some northern provinces and a shortage in the south.

In Canada, the world’s third largest exporter, producers’ fortunes have fallen along with the U.S. because their prices are tied to that much larger market. In August, prices fell 31 percent less than the previous month, according to data compiled by Hams Marketing Services.

Manitoba farmer George Matheson now expects to sell his about 250 pigs for C$115 per head – well short of the C$150 it costs to raise them.

“I had a hunch this would not be a good thing,” his said of the trade disputes.

Many farmers in China are searching for cheaper protein-rich ingredients to replace soymeal, such as rapeseed or yellow peas. 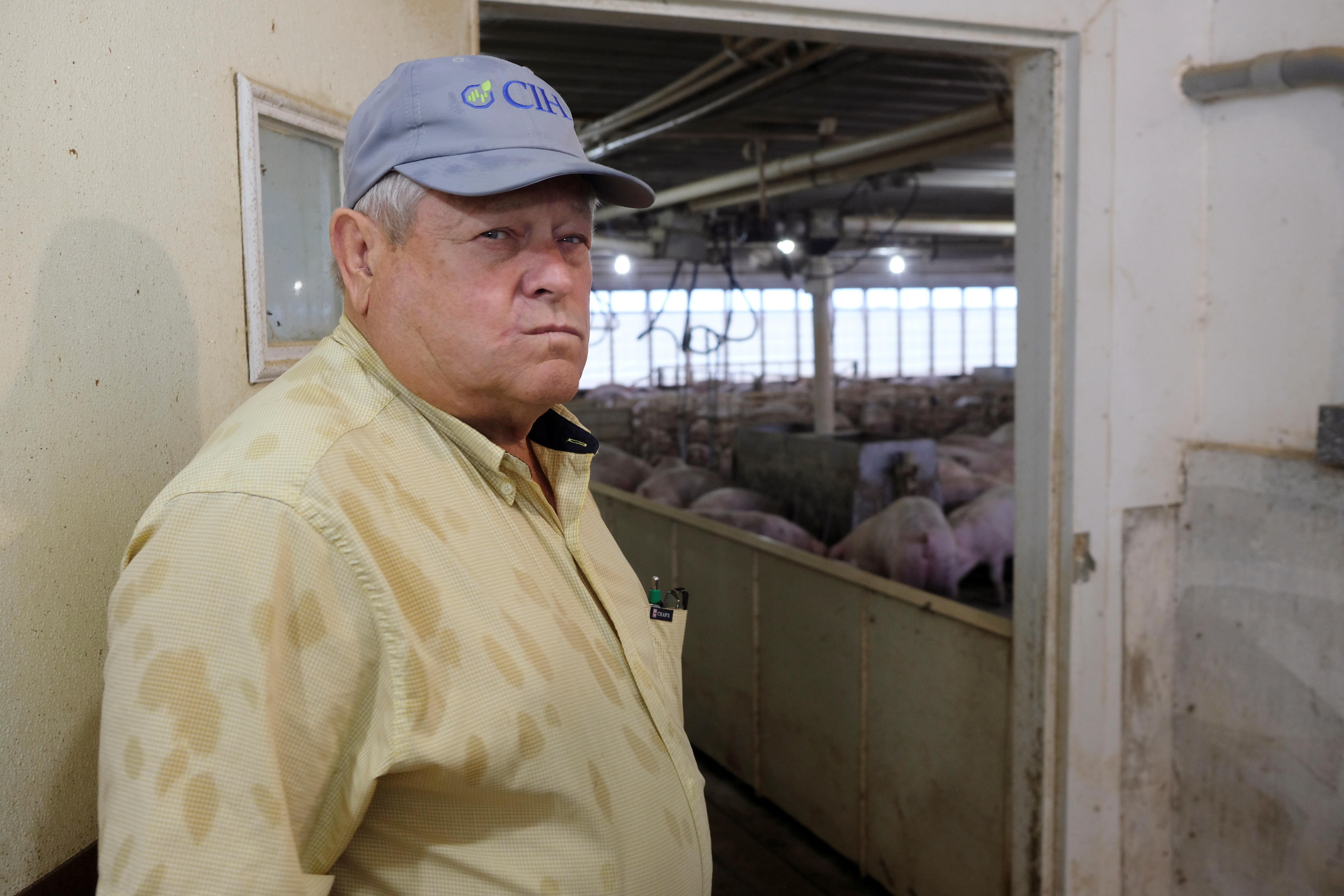 “Everything I use is becoming more expensive,” said Yu Shiqian, who raises 1,800 hogs in northeastern Liaoning province. “Only the hog price is declining.”

Hong Kong-based WH Group (0288.HK), the world’s top pork producer, which also owns U.S. giant Smithfield, warned earlier this year that its biggest challenge is the oversupply of meat in the United States and uncertainty over trade tensions.

Xie had hoped to rebuild his herd after the summer but instead “decided to stay away from the pig business for a while.”

“At least I can guarantee I don’t lose money this way,” he said.

In Iowa, the top U.S. pork-producing state, trade disputes will cause hog farmers to lose $18 per head, or $800 million in total revenue from August 2018 to July 2019, Iowa State University economists predicted in September.

For The Maschhoffs, the estimated loss equates to $100 million.

The company considered investing in China, Eastern Europe and South America in recent years but shelved the plans because they could more efficiently raise pigs in the United States.

“We’re starting to scratch our heads and say, ‘Did we make the right decision?’” he said.

Producers have scaled back expansion plans because of the trade war, said Barry Kerkaert, a vice president at Minnesota-based Pipestone System, which annually sells farmers about 250,000 sows.

In Lone Rock, Iowa, a town of about 200 people, Roger Cherland raises 3,000 sows. Housed in long barns, the swine jostle for space next to feed bins topped off by machines. The Cherlands’ hogs fetched about $40 per hundred pounds in August – about $20 less than their break-even price.

“We’ve got way too many pigs right now,” Cherland said of U.S. farmers.

A RUN ON SOY IN BRAZIL

In Europe, big pork exporters such as Spain and Germany, have made some additional sales to China and Mexico since the trade wars escalated this year. But the new sales have not been enough to support EU prices because of expanded domestic supply and because China bought less pork earlier this year than in past years.

Pig farmers in Brazil, the world’s fourth largest producer and exporter, also might have been well-positioned to capitalize on a U.S.-China trade war by boosting sales to China. But that has hardly offset the damage from higher feed prices and a host of domestic problems that are hurting exports, driving up domestic supply and slashing prices.

Russia, which until recently bought nearly 40 percent of Brazilian pork exports, imposed a ban in December after discovering traces of the prohibited food additive ractopamine. And the European Union banned imports from 20 Brazilian meat plants, mainly poultry suppliers, due to alleged deficiencies in the nation’s health inspection system.

Brazil’s pig farmers normally can buy cheap local soybeans, a key ingredient in animal feed, because the nation is the world’s second-largest soy producer – but now they pay record prices in part because of the rush of Chinese buyers.

Wilant Boogaard, a hog farmer in Paraná, operates as a member of a cooperative, a scheme that guarantees his production costs are covered by an associated meat processor.

But as partners in the processing business, the cooperative’s farmers have a 40 percent stake, leaving them on the hook for losses.

“The meat-packer is losing money,” he said. “If we manage to survive, it will be a great thing.”