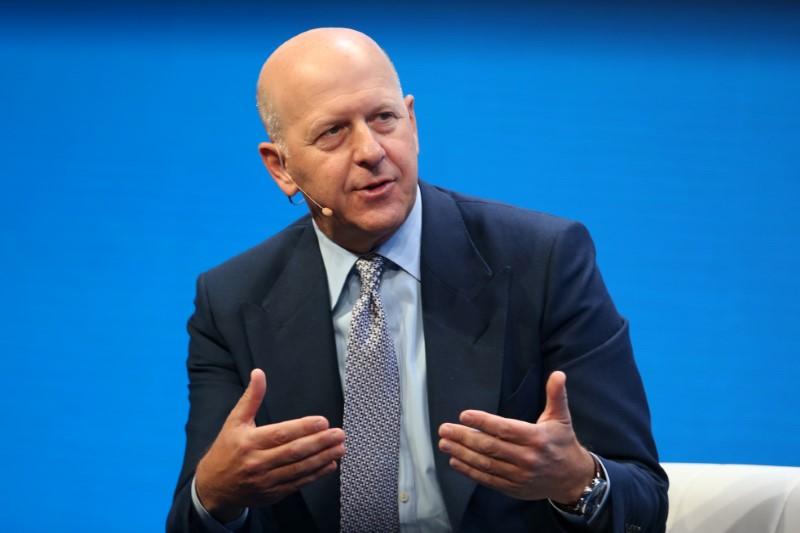 NEW YORK (Reuters) – Before Goldman Sachs Group Inc (GS.N) operating chief David Solomon takes the next step in his career, the 56-year-old banker will have to prove that a strategy he has championed to increase annual revenue by $5 billion can actually work.

Solomon, who is now effectively the chief executive officer-in-waiting after his rival in the succession race decided to leave the Wall Street bank, is trying to get dealmakers and traders to work together to produce more revenue. He is also pushing for growth in businesses like asset management and consumer lending, where Goldman does not have a long track record of success.

Since the strategy was unveiled in September, Wall Street has been rife with skepticism that Goldman, whose annual revenues have remained stuck below $40 billion since 2010, can make it happen. Analysts have repeatedly questioned management’s underlying assumptions for the $5 billion target in research reports and on public conference calls.

Privately, many bankers and traders scoff at the idea that Solomon can get competing sides of the house to cooperate.

“I have been with Goldman for 20 years and have been hearing this idea for as long as I have been here,” one dealmaker told Reuters about the cross-selling plan. “I never in my 23 years here been asked by a client to be introduced to our stock brokers,” said an investment banker at a rival firm.

Like several others, those bankers spoke about Solomon and the revenue strategy he helped engineer on the condition of anonymity because they were not authorized to speak to the press.

But associates who spoke to Reuters about Solomon described a direct, decisive leader who has proven he can convince clients to do more business with Goldman Sachs, and who can also get a team motivated behind an untested strategy.

For instance, as co-head of Goldman’s investment bank from 2006-2016, Solomon is credited with bolstering the debt financing business.

NOT HOPING TO GO BACK A DECADE

Goldman had historically avoided putting its balance sheet to work to support deals because the bank usually represented acquisition targets rather than acquirers. But Solomon, who spent the early part of his career in debt markets, saw big opportunities for Goldman to be a lender at a time when low interest rates were prompting companies to borrow at an unprecedented rate.

His decision helped the broader investment banking unit’s revenue soar 70 percent during the time Solomon was one of its leaders. That helped offset a sharp decline in trading revenue that has plagued Goldman since 2009.

“We don’t sit around hoping that 2007 or 2009 will happen again and that the world will go back to where we were a decade ago,” said Stephanie Cohen, chief strategy officer. “David is a leader who embraces the future without forgetting the past. And he’s got a strong heritage within one of our strongest businesses.”

More recently, Solomon has been encouraging investment bankers to go beyond the CEOs they typically pursue for M&A transactions, and also to develop relationships with corporate treasurers and executives who oversee operations like hedging. The idea is to convince those who choose which banks to borrow from and trade with to use Goldman Sachs instead of powerhouses like JPMorgan Chase & Co (JPM.N) or Citigroup Inc (C.N).

Solomon is not shy about getting personally involved, associates said, leading client meetings and giving feedback. He has also been a big proponent of cross-selling for many years. When he ran investment banking, he made a particular effort to connect people within the investment banking and investment management divisions to share expertise and ensure better client coverage.

“David has got everyone in a room talking about collaboration a lot more,” another executive said.

Solomon clearly has some level of support internally – including from his boss, CEO Lloyd Blankfein, who told Goldman’s board of directors last month that Solomon was his top pick as a future successor, a person familiar with the matter said. That decision prompted Harvey Schwartz, the other co-chief operating officer, to announce this week that he will leave the bank in April.

But Solomon still has work to do in winning over Wall Street, where investors and analysts remain skeptical of management’s revenue plan.

Instinet analyst Steve Chubak took a close look at assumptions behind Goldman’s plan to produce $5 billion more in annual revenue by 2020 in a November report titled “All That Is Goldman Does Not Glitter.” He concluded that management’s view on the profit potential of consumer lending was too rosy and that, overall, the new business will not make up for high-margin trading revenue that has evaporated.

Others expressed similar doubts in interviews this week.

“Lloyd Blankfein is a master of markets…and those are tough shoes to fill,” said Wells Fargo analyst Mike Mayo.